Hello everyone!  I am attempting this blogging thing.  I don’t know a whole lot about it but want to learn!  🙂  Oh, where to begin…..I’ll just start from the beginning and try to get caught up to the present time and go from there!  🙂

I grew up in a small town in south central Nebraska, population 750.  It was a small farming community, but I grew up in town.  The only experience that I had ON a farm was going out to my aunt and uncle’s when they were “working” calves.  I would sit up on the fence and watch them brand the calves and turn bull calves into steers.  Fun times!

After college, my first job was attending trade shows for a crop insurance company.  I went all over the US to about 25-30 shows a year.  It was a lot of fun and I got to meet a lot of great people.  In March of 2006, I was at the Commodity Classic trade show in Anaheim, CA when I meet my husband.  One year and 6 days later (5 days after returning from the 2007 Commodity Classic in Tampa, FL) we got married.  I then moved from the city that I was living in, to a farm in southwest Iowa.

Now, don’t get me wrong, I wouldn’t necessarily consider myself a city girl, but I definitely wouldn’t say I was a farm/country girl either!  🙂  All I can say is that I had a lot of learning to do!  There are many stories that I will tell you about in future posts, so stay tuned for more!

As of today, I have been living with my husband on our farm for 3 1/2 years and I wouldn’t trade it for anything!

This past March (the day before our 3rd anniversary) our son, HD, was born.  He will be the 7th generation to grow up on our farm….amazing!  ﻿ 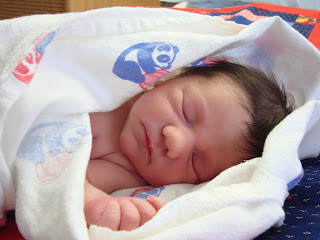 When he was just 3 weeks old, he was out checking cows with his daddy! 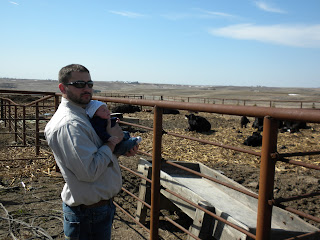 He just got to ride on the combine for the first time the other day and he really enjoyed it! 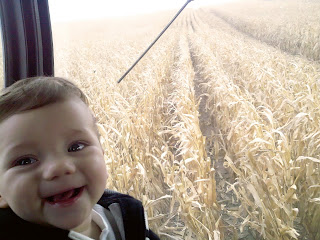 I absolutely love being a mommy….it’s the best feeling in the world when he looks at you and grins and holds his arms out to me.  Or when he gives me one of his really wet kisses.  🙂
Well, that is all for my first blog.  I’ll try to get in a few “farming” stories and some recipes real soon!  Until next time!
Sara﻿