After work you stop by your local grocery store to pick up a few things for dinner.  As you are walking down the frozen food aisle, you look down at your grocery list:

Milk….check.
Chicken….check.
Bread….check.
Tomatoes….check.
Steaks….check.
Cheese….check.
Have you ever thought to yourself, “I wonder where all this food came from?  Is it safe?  How was it raised?”  If you have, then you are thinking like a growing number of consumers these days.
There is so much information out there that reaches consumers, but it’s not always the “whole” story and farmers are concerned about that.  With more Americans growing up in urban and suburban areas, miles from farm life, there is an increasing disconnect between consumers and the people who grow their food.  In 1950, 75% of the world’s population was rural.  In 2050, 75% of the world’s population is expected to be urban.  Because of this, there are many misconceptions about farming and the food we eat.
This is where CommonGround steps in.  CommonGround is a national, grassroots program aimed at increasing consumer trust in modern agriculture by connecting farm families with urban consumers.  There are currently sixteen Spokeswomen in five states (Indiana, Iowa, Kentucky, Nebraska and South Dakota) and the goal is to share what it’s like on a family farm; how livestock and crops are raised to feed the world.
This effort is backed by the United Soybean Board (USB), the National Corn Growers Association (NCGA) and farmers.  They were all looking for ways to reach consumers with real information about agriculture.  So they teamed up with state corn and soybean associations and the Spokeswomen of CommonGround to showcase the commonalities between the life and experiences of real farm families and the consumers who benefit from all that farms grow—to show that there is, in fact, CommonGround. 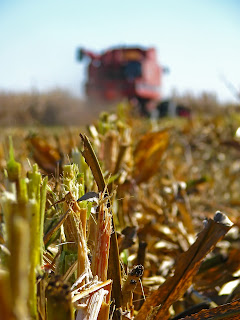 According to American Farm Bureau, 98% of American farms are run by farm families.  Today’s American farmer feeds 155 people worldwide, which is up from 25.8 people in 1960, according to farmersfeedus.org.  Thanks to modern American famers, U.S. families enjoy the safest, most affordable and abundant food supply in the world!  In order to do this farmers are producing more food on less land because of technology and seed advancements that have developed over the years.  Modern farming is good—it is the reason food is so affordable.
Farming is our livelihood and our legacy.  It is a lifestyle that is a safe and nourishing environment to raise our children in and to teach them family values.  My husband is the 6th generation to farm our family’s farm, which makes my son the 7th generation to grow up on our farm in Southwest Iowa.  We raise cattle and grown corn and soybeans.  We are doing our part to raise and grow safe and healthy products we can be proud of.  Producing an abundant crop and healthy cattle is very important to us and we take pride in what we do.  Farm life is a 24/7 job and it’s not always fun or easy, but it’s so rewarding to see those baby calves being born in the spring and the crops growing tall in the summer.

The Next Steps for CommonGround
Our role as Spokeswomen is to reach out to as many urban consumers as possible and tell them about our family farms and farming experiences.  We want them to put a face with the food they put on their tables every day.  We will be attending local and national events, speaking engagements, media tours and farm visits.  One of the first events to be held by CommonGround is by the Iowa Spokeswomen.  We will be holding an in-store promotion at HyVee West Lakes in Des Moines, IA on February 5th.
We will also be attending the Commodity Classic in Tampa, FL the beginning of March to launch our national campaign.  If any of you are there, please stop by our booth and attend our informational session to learn more!
Social Media
“A lie can travel half way around the world while the truth is putting on its shoes.”  This is a quote from Mark Twain.  If he only knew how fast word travels today with the use of cell phones, email and the internet!
The CommonGround Spokeswomen are using social media to get the true story out about today’s farming and the people behind it.  Many of us use Facebook, Twitter (follow me @sarashousehd), YouTube and some even have their own blogs.  A few of the blogs you might be interested in reading are:
·        www.galinthemiddle.blogspot.com
·        www. 3kidsandpigs.blogspot.com
·        www.agonthe4front.blogspot.com
·        www.meyerdairy.wordpress.com,
·        www.sarashousehd.blogspot.com
A few other farm related blogs that are definitely worth checking out are www.webelfamilyfarm.blogspot.com and www.thepioneerwoman.com!
CommonGround also has its own Facebook page (search for CommonGround), Twitter account (follow @CommonGroundNow) and webpage www.findourcommonground.com.
Fun Farm Facts
The beginning of January all of the Spokeswomen came together and met each other for the first time.  We all had a chance to tell our own personal farm stories.  Let me tell you, there are A LOT of things that I learned that week from those ladies.  Each one of us has our own unique story and it was fun sharing it with everyone.  We came away from that trip with a renewed sense of who we are and how important American farmers are to not only this country, but to the world.  We look forward to the future and all the people that we will meet and tell our stories too.  If you have any questions or want a Spokeswoman to speak at an event, please contact me at sarashousehd@gmail.com.    With that, I’m going to leave you with a few fun farm facts from www.farmersfeedus.org:
·        Mature turkeys have more than 3,500 feathers.
·        There are 47 different breeds of sheep in the U.S.
·        Pork is the most widely eaten meat in the world.
·        The average person consumes 584 pounds of dairy products a year.
·        160 degrees Fahrenheit is the correct cooking temperature to ensure safe and savory ground    beef.
·        Elevators in the Statue of Liberty use a soybean-based hydraulic fluid.
·        Like snowflakes, no two cows have exactly the same pattern of spots.
·        The longest recorded flight of a chicken is 13 seconds.
·        Twenty-nine cuts of beef meet government guidelines for lean.
·        The average dairy cow produces seven gallons of milk a day, 2,100 pounds of milk a month, and 46,000 glasses of milk a year.
·        Turkeys originated in North and Central America, and evidence indicates that they have been around for more than 10 million years.
·        Agriculture employs more than 24 million American workers (17% of the total U.S. work force).
·        Today’s American farmer feeds about 155 people worldwide. In 1960, that number was 25.8.
·        Raising beef cattle is the single largest segment of American agriculture.
·        One pound of wool can make 10 miles of yarn. There are 150 yards (450 feet) of wool yarn in a baseball.
·        Soybeans are an important ingredient for the production of crayons. In fact, one acre of soybeans can produce 82,368 crayons.
·        The heaviest turkey ever raised weighed 86 pounds, about the size of an average third-grader.
·        Cows have four stomachs and can detect smells up to six miles away!
·        Cows are herbivores, so they only have teeth on the bottom jaw.
·        There are 350 squirts in a gallon of milk.
·        Cows must give birth to a calf in order to produce milk.
Sources:  CommonGround Material, farmersfeedus.org, American Farm Bureau, suite101.com.