Well, these past few weeks months have been extremely busy for Kevin as he was preparing to begin his one year term as the President of the Iowa Corn Grower’s Association.  The last few weeks in August, Kevin was in Des Moines, IA for committee meetings and board meetings.  This was all leading up to the Annual Meeting and Policy Conference on Saturday, August 27th.
I was able to attend this meeting as an Alternate Delegate, meaning I would get to vote on the new policies that they were going to bring before us if one of the other Delegates was unable to do so.  As the incoming President, Kevin was the one running the annual meeting.  He started out introducing the National Corn Grower’s President, Bart Schott, who gave a welcome and update from the NCGA level. 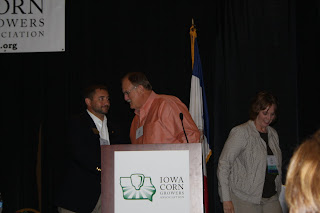 We then got updates from the ICGA government relations staff, the US Grains Council and the US Meat Export Federation.  After that we began our annual meeting where a special person was given an award, the first ever of it’s kind.
Owen J. Newlin, retired senior vice president of Pioneer Hi-Bred International, received the first Iowa Corn Lifetime Achievement Award.  It is given in recognition of outstanding service and commitment to advance the corn industry and keep the industry cutting edge through technology, political action and time devoted to the Iowa corn industry.  Source:  Iowa Ag Connection, August 30, 2011. 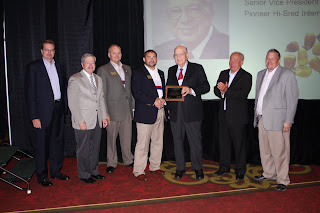 Next on the agenda was Iowa Secretary of Agriculture Bill Northey.  Secretary Northey encouraged farmers to continue to work with our state and federal government.  He also spoke about agriculture’s benefit to Iowa’s economy, including the importance of corn-based ethanol.  Lastly, Northey discussed the need to continue voluntary conservation programs. 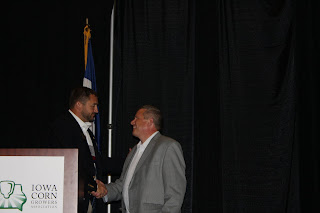 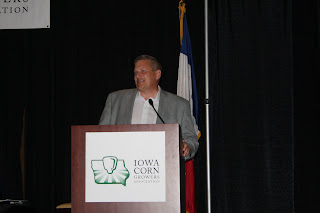 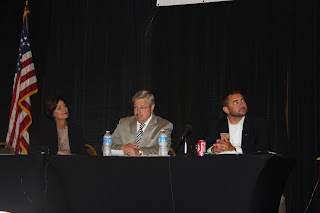 As part of ICGA’s Corn Caucus Project, all presidential candidates running for the Republican nomination, along with President Obama, were invited to address the ICGA delegates.  Three candidates, including Texas Governor Rick Perry, Texas Congressman Ron Paul, and Michigan Congressman Thaddeus McCotter, met with the group for 15 minutes each.
Governor Rick Perry expressed his support for the three pending Free Trade Agreements and reviewing and reducing the amount of regulations being proposed by the EPA.  He talked about how tax policy in the state of Texas has helped grow their economy, compared to Iowa’s more restrictive laws.  Governor Perry called for equitable tax treatment for all fuel products and stated that the government “shouldn’t pick winners and losers.”  When asked, Perry’s position on supporting the existing Renewable Fuel Standard was not clear, but he added that we should remove regulations placed upon farmers which would allow them to better compete.  Governor Perry pledged to ICGA staff after the visit that he is willing to keep dialogue open with ICGA on this important issue. 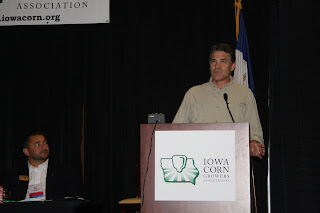 Congressman Ron Paul focused primarily on keeping taxes low throughout the budget debate on Capitol Hill.  In addition, he raised the issue of burdensome regulations, especially EPA regulations that need to be addressed by the next President.  Representative Paul stated that such regulations need to be decided at the state level.  Multiple times, he mentioned his support for individual liberty and property rights.  While Representative Paul said he does not believe in any kind of federal requirements on fuel usage, and would not support the Renewable Fuel Standard, he believes tax credits for ethanol should stay in place. 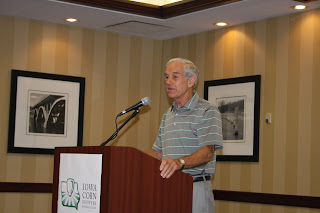 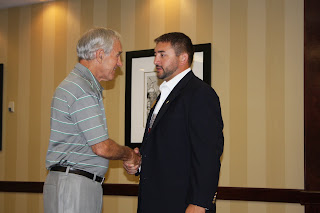 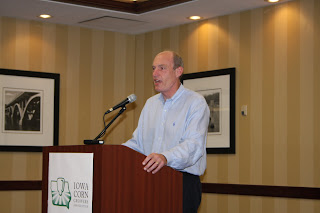 The Corn Caucus Project is implemented by the Iowa Corn Growers Association, in partnership with National Corn Growers Association (NCGA) and other supporting corn states.  The project has two main goals: (1) work with each Presidential candidate’s campaign to help inform and influence candidates in favor of “corn policies” and (2) to identify the candidates’ positions on corn policy and share that information with our members.  It is important to note, the Corn Caucus Project does not endorse a Presidential candidate.  Instead, the project seeks to educate farmers so they can make the most informed decision for themselves at the Iowa Caucus, and ultimately in November 2012.
ICGA is seeking farmers interested in linking up with each Presidential Campaign.  For more information about how you can get involved with the Corn Caucus Project, contact Amanda Taylor at ataylor@iowacorn.org or 515-225-9242.