Last week was a busy one.  Kevin was home weening calves and getting things in line for harvest which is just around the corner while HD and I made a trip out to Nebraska for work Tuesday through Thursday.  Normally our drive time is 3.5 hours each way, but for some reason on the way out there and on the way home it took us five hours each way!  That’s a long time to be in the car for me, let alone an 18 month old kiddo!  But he’s a trooper and behaved the entire way.
Then on Friday after work, I took HD out to his Aunt Megan’s house in Omaha.  He got to hang out with her all weekend long while Kevin and I headed east across the state of Iowa to a friend’s wedding in Clinton.  Clinton is about as far away from where we live in the state of Iowa as you can get!  It’s about a five hour drive straight through.  I love that part of Iowa and we hardly ever make it over there, so I thought it would be fun to leave on Friday evening so we could get a head start and maybe stop a few places along the way.  We finally pulled out of our driveway at 7:35pm on Friday night.  We decided to drive to Des Moines and eat dinner there and then maybe drive a little further.  Our goal was to be at the Amana Colonies by 9ish the next morning.
We stopped and ate at Tursi’s Latin King and it was delicious!  After than we headed down I-80 to Newton where we decided to spend the night.
The next morning we awoke to beautiful weather-crisp, cool air and warm sunshine…perfect for strolling around the Amana Colonies for a few hours!  We drove through Homestead first and then up to Amana. It was so pretty there! 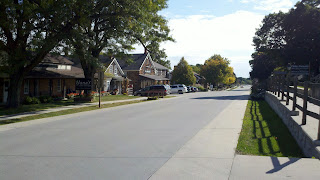 We soon found Ronneburg Restaurant.  I had the Ronneburg’s Choice #3 which had the most amazing breakfast sausage I’ve ever had!  It was so good that we wanted to know where they got it from.  We were in luck!  They buy it from the local meat market, so we headed over there after breakfast and bought some to take home with us! 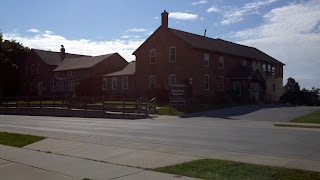 After breakfast we walked around and stopped in some of the little shops and wineries there in Amana, but soon it was time for us to head down the road.  We made it to Clinton, IA around 2pm which gave us time to check in and get ready for the wedding.  We met up with our good friends, Keith and Christy. Kevin and Keith go back to their college days at ISU and I have known them since the summer of 2006. Can’t believe how much our lives have changed in those few short years!  They got married the March after we did and now have two CUTE little girls, whom we got to see this weekend also!


The wedding and reception were beautiful!  The reception was held at the Eagle Point Park Lodge.  It had an amazing view of the Mississippi River and as we were walking in, a bald eagle soared overhead! I highly recommend this park for family get togethers!  It was beautiful!

The next morning (Sunday) Kevin and I had a few hours to waste.  We had to make it from Clinton, IA to Anamosa, IA by 2pm.  So we set out from our hotel around 10am and went in search of a place to eat breakfast.  We drove down to the Riverfront District in Clinton and came across this little espresso place:  Espresso, Cigars and More.  It was one of those random stops where we drove by and decided to turn around and go back to check it out.  There Kevin and I met a friendly Cuban lady named Regina.  She explained how Cubans drank their coffee and that they didn’t really eat a large breakfast, just things like toast and pastries.  We both decided to try some coffee and Kevin went for the tropical guava pastry and I had some toast.  While Regina was making our coffee she poured us each a shot of espresso.  She told us to drink it like you would a tequila shot.  So we said “Salute” and drank it.  It was sooooo good!  Before we left there we each ended up with two more espresso shots (three total) on top of our cup of coffee (which was made with espresso and a little milk)! 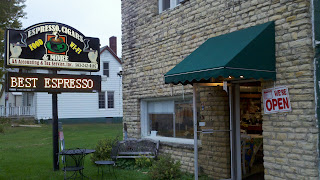 The type of coffee that she uses is Bustelo.  This is a picture of the ground up kind, but she buys it as coffee beans and grinds it herself.  It was by far the best coffee that I have ever had!  Hands down!  So if you are ever in the Clinton, IA area, stop by and see Regina!  The address is 2007 N. 2nd Street in Clinton, IA. 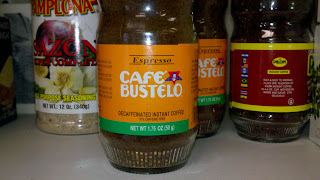 After that we headed north out of town on Highway 67 and about two miles down the road we came across a sign for Wide River Winery.  So, we did what we normally do and we flipped around and drove up the hill to check it out.  You just about need a 4-wheel drive car to get to it, but our Altima made it!  It’s up on top of a hill overlooking the Mississippi River.  When we got up there it was just starting to rain, but it was still very pretty up there with all the trees and and flowers. 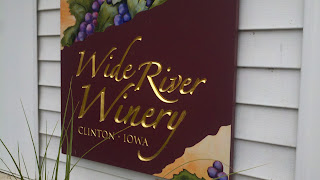 We tried a few of their wines and bought a few to share with some friends and family back home.  They were very nice there and their wine was great!  They have won many awards and you could definitely tell when you tasted their wine that they took it seriously!  I highly recommend the MS. D’MEANOR WHITE.  It was my favorite while Kevin liked the FELONY RED the best.  They came up with quite the names for their wines!


From there we had to head towards Anamosa.  And then from there we headed home.  We got to our house at 7:20pm last night and I still had to go get HD from his Aunt’s house in Omaha.  So HD and I got home about 9:15.  We got to play and read a few books before he went to bed and we were right behind him.  It was a long, but fun weekend!


One more thing before I wrap this post up.  While we are gone my sister was really good about texting us pictures of HD.  She sent about 10 pictures, but I just wanted to share a few with you!  Here he is picking flowers with Aunt Megan.  She said he was thinking, “She loves me, she loves me not…” 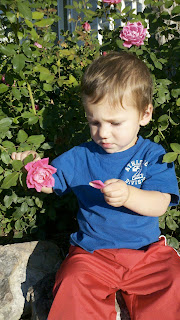 And this is the Touchdown HD.  I think he was cheering for the Huskers while this picture was taken! 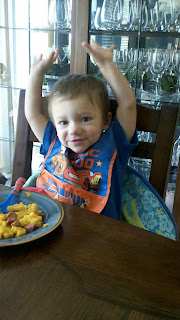 I hope you all had a great weekend too!  Did you do anything exciting?  Or were you one of the lucky ones that got to stay home and do nothing?!?  I miss those days!  It seems like there is always something to do now-a-days!