Well, this past weekend was a busy and fun one!  It included seeing friends, an exciting football game, canning and freezing vegetables from the garden, baking a peach pie, a yummy halibut recipe and a big surprise for HD!

I will start at the beginning….  On Friday after work, some good friends of ours picked me up and we met up with Kevin in Ames, IA.  He was already in town for meetings and that evening we got to see a lot of our Corn Grower Association Friends.

Then the next morning the alarm clock went off at 4:45 am.  Since the Iowa/Iowa State football game started at 11am, we need to leave our hotel around 5:30.  Well, it was a little after than, but we didn’t hit any traffic on the way to the stadium (a lot of people were already parked and tailgating by 6am)!  We got to our parking spot and set up camp.  At 8am Kevin and I made our way over to the Corn Grower’s tent.  From there Kevin had to head into the stadium to start his round of interviews.  Since he is now the president of the IA Corn Grower’s Association, he got to speak with a lot of reporters and broadcasters that day. 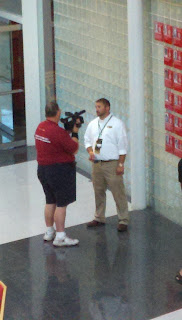 Right before the game started, I was in the Jacobson Building so I got to see all the football players get ready to run out onto the field. 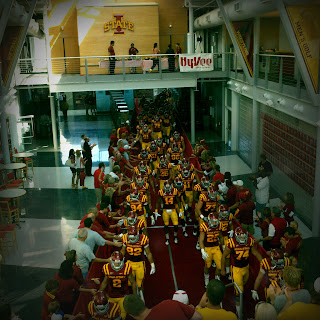 The picture below is from my spot in the Jacobson Building.  Kevin is actually down on the left side of the tunnel in all that fog! 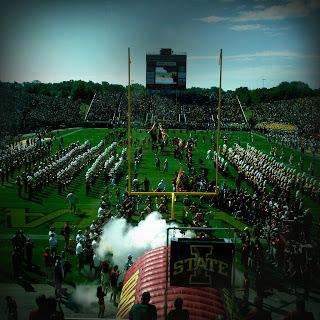 Even though I am a Husker fan through and through, I have to admit that the Iowa/Iowa State game on Saturday was a very fun one to watch.  It was pretty much close the entire time and then went into three overtimes before Iowa State won!  The crowd just flooded the field.  It was crazy to watch! 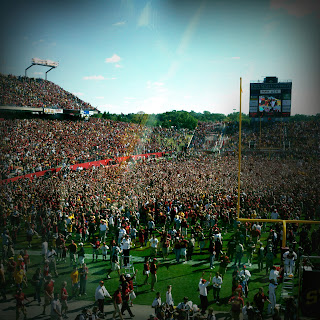 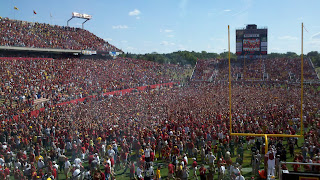 Then we thought we might as well go out there too! 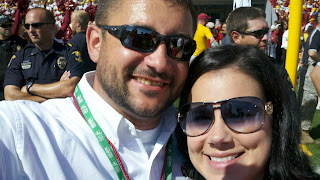 After the game we tailgated for awhile with some friends while we waited for the traffic to die down.  Then we went and ate dinner and headed over to Boone, IA.  There we picked out HD’s surprise!  An American Bulldog puppy!  We decided on a female.  She was mostly brindle with a little white.  She was such a cutie and a little snuggler!
Since we now had a puppy, we decided to drive home that night.  HD was still at his Uncle Jim and Aunt Nancy’s until the next day, so we had to wait until after church the next day to show her to him!
He wasn’t sure what to think at first…. 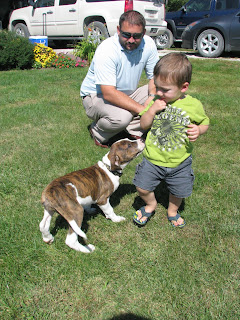 Then she tackled him and decided to lay on top of HD.  He didn’t really like that very much.  But he gradually warmed up to her! 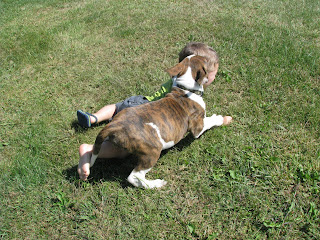 Today, he gave her hugs and played with her a little outside.  The puppy was a little calmer around him so that helped too. 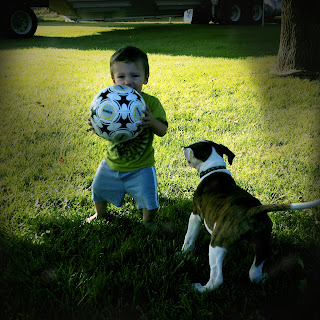 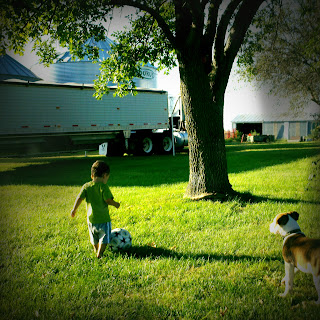 We haven’t decided on a name just yet.  We can’t seem to agree on anything!  But she will have one!  (If you have a suggestion, please leave it in the Comments section below!) 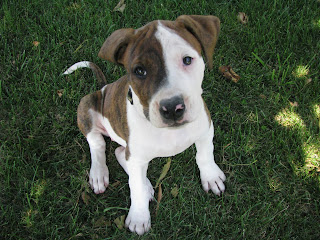 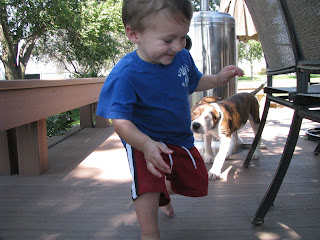 Yesterday afternoon, my sister Megan came to visit.  She hadn’t seen HD in awhile and I promised her I’d make a peach pie.  So she drove out to our place for the afternoon and dinner.  This allowed me to can some green beans, tomatoes and freeze some carrots.  I also had two lugs of peaches that I need to do something with, so I started by making a peach pie.  I don’t have a picture of it, but I’ll find the recipe and share it soon!

After I got done canning tomatoes, I had a few leftover and was trying to figure out what to make for dinner.  I went down to the deep freeze and came back up with a large piece of halibut that Kevin caught in Alaska.  Megan and I came up with a Italian style sauce to pour over it and then I baked it in the oven.  It turned out great!  I paired it with some leftover sides that were in the refrigerator and the peach pie for dessert!  I will share the recipe tomorrow! 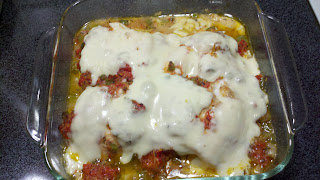 All in all it was a busy, fun-filled weekend.  I can’t believe that the summer is over and that football has started already.  Harvest is right around the corner!  I think the high on Wednesday is suppose to be 58 degrees here.  Someone mentioned chances of flurries!  I hope not!  I have a lot of green tomatoes in the garden that need some warm days still!

Keep a look out for some new recipes coming this week.  I’ve been kind of behind on my blogging lately.  I have three posts that I have started but never got a chance to complete, so bear with me while I get caught up!