As a farmer with cattle, one of the most dreaded things that could happen is to get a phone call or a knock on your door saying that you have cattle out.  It just makes your stomach sink.  You wonder where are they, are they eating the crops in the fields or worse…are they on the road?  Where our house is, we are on a country gravel road, but at the other farm, where Kevin’s brother and sister-in-law live, it is situated right on a heavily traveled highway.  We have cattle at both locations and over the years have updated the fences and corrals, but every once in a while we still get that dreaded phone call.
Like today for instance.  I was at work and Kevin was in town at a breakfast meeting.  About 10:30 or so I got a phone call from Kevin asking if I would run over to his brother’s house and see if the cows that were reported out were ours or not.  He was thinking they weren’t, but it’s better to be safe than sorry.  Since I was at the office, it was only about four miles for me to get there.  Sure enough, there were three cows hanging out on the wrong side of the fence.  I went a little further and I could hear the corn rustling and could barley see something large and black tromping through it.  I counted eight cows that were out and from what I could see most of the rest of them were still in.  Since it was only me I had to just stand there and wait for Kevin to get there.  If I had had at least one more person we could have taken care of it, but you need one person to hold the gate open (while keeping the other cows in) and one person to push the cows in the right direction.  Once Kevin got there (about 20 minutes later) I held open the gate and he drove up the hill and pushed them right back down and they walked right in my open gate.  Whew!
The cows know where they are suppose to be, but sometimes they like to go on an adventure.  We easily found the spot in the fence (it was part of the older fence that hasn’t been updated yet) where they got out and Kevin got that fixed in no time.  So, today went pretty smoothly, but it’s not always that easy.
I remember one time I was coming home from being gone for work and it was about 10pm on a weeknight and Kevin had weened the calves while I was gone.  (This was before we had new fence.)  As I was coming over a hill about a half mile down the road I could see black cows all over the place!  I flew into the driveway and ran in and got Kevin.  We ended up having to call his mom and dad to come help along with his grandma next door.  I don’t remember exactly how long it took to get them all back in, but it’s really hard to find black cattle when it’s pitch black outside!
But now that we have new fence they don’t get out hardly at all…except for today.  Darn naughty cows! 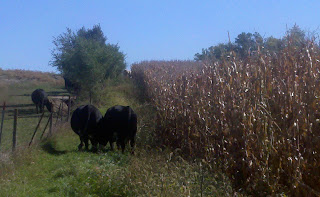