A few weeks ago Kevin and I got a formal invitation in the mail inviting us to attend the World Food Prize Laureate Award Ceremony that was held at the Iowa State Capital in Des Moines.  They were going to be awarding the World Food Prize this year to His Excellency John Agyekum Kufuor, former president of Ghana, and His Excellency Luiz Inacio Lula da Silva, former president of Brazil.
This year was the 25th anniversary of the founding of the World Food Prize, which was started by Dr. Norman E. Borlaug, one of the world’s great heros in fighting hunger.  According the the official program for the ceremony, we were coming “together to honor his (Dr. Borlaug) legacy and that of John Ruan, who saved this Prize, as well as the incredible achievements of all the World Food Prize Laureates who have been honored over the past 25 years.  The World Food Prize started as a dream, drawing only 50 people to its ceremony and one-day symposium.  Today, it attracts over 1,000 people from 65 countries around the globe for a week of events, and has come to be seen as the “Nobel Prize for Food and Agriculture.”
“Since it’s inception in 1986, “The Prize” has been awarded to Laureates who have been recognized for their achievements in a broad array of areas, including:  plant science, microcredit, food technology and aquaculture, to mention only a few,” stated Ambassador Kenneth M. Quinn.
Let’s just say, this was quite the experience, unlike anything we have been to before. 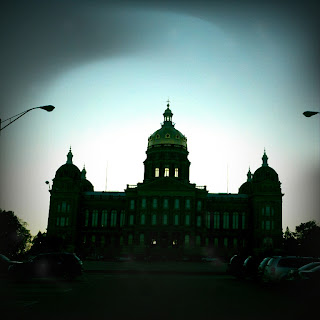 When we got arrived at the capital, we parked and walked around to the front.  It was so pretty with the setting sun hitting it just right. 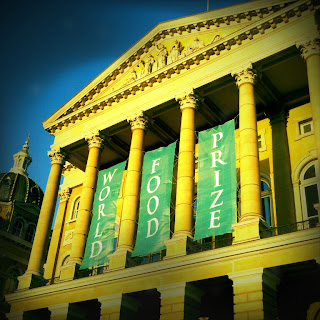 There were TV cameras and photographers all lined up next to the red carpet that lead up to the Capital (there really is a red carpet, but it’s on the flat part, so you can’t see it in this picture).  When we got inside we got our tickets, walked through the metal detectors and then walked upstairs.  We got asked no fewer than eight times to show our tickets as we made our way to our seats.  When we got inside the House Chamber, we showed them our tickets (again) and there just happened to be two seats right on the aisle! 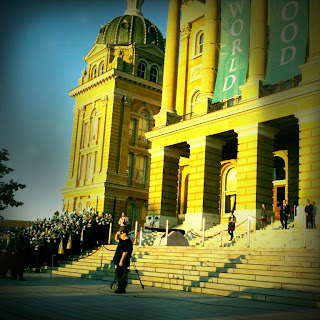 The program was televised on Iowa Public Television (it is going to be retelevised on Sunday at 4pm for those of you who missed it the first time around).  Right at 7pm, there was a procession of Laureates and Dignitaries.  Since we were sitting right on the aisle, we had prime seats to see everyone walk in.
The program began with a 25th anniversary video presentation, the poem “In Any Language” was then read by Jeanie Borlaug Laube and then two awards were presented to interns that had attended the Global Youth Institute.  Next was a Special Tribute by Judith Rodin and then the Tokyo String Quartet played.  It was absolutely amazing.
When they were done, the Honorable Terry Branstad gave the Laureate Proclamation and then the 2011 World Food Prizes were awarded to His Excellency Kufuor and His Excellency Lula da Silva. 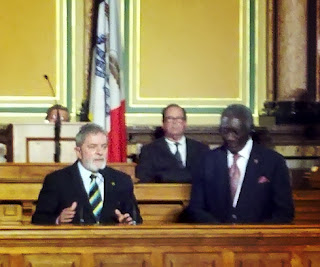 They each had the opportunity to speak and were very interesting to listen to and hear their messages.

The ceremony was closed by the world famous opera singer, Simon Estes, singing “Save the Children” and “All this Joy”.  What a voice!

Following the ceremony, there was a formal dinner in the Rotunda.  We had the privilege of sitting with five gentlemen from Mozambique, two ladies form Women Thrive Worldwide and a gentleman from the Food and Agriculture Organization of the United Nations. 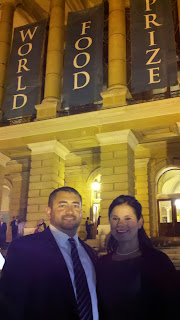 At the end of the evening, we headed home.  We were very honored to have attended this event and meet all those wonderful, inspiring people.