Our morning started out really early again (4:30 am which was actually 3:30 back home).  We were told to leave our hotel at 5:30 so we could go get in line to see Good Morning American.  In the past we signed up online and got to go inside the studio and stand there while they were filming.  And we almost always got to be on national television.  So I didn’t think that this time would be any different.  So a few weeks prior to leaving I got online to RSVP and I saw that they now called it a Backstage Tour Pass.  So I signed us up for it.  After I hit “Submit” it just said “Thank you for your submission.”  So I just figured that they would have our names on the list like usual.

So we get up to the GMA studio in Time Square by about 5:45am and we were the first ones in line!!!  There was a Starbucks on the corner, so we took turns going and getting something warm to drink since it was pretty chilly.  If the wind hadn’t been whipping around it wouldn’t have been that bad…..  So we are all standing in line and others come and get in line behind us.  You can see there is a set of doors behind us in the picture below that GMA employees kept coming in and out but no one said anything to us.

So we continued to stand in line (and freeze) when I noticed that they were setting up an outdoor area down the block on the corner.  So I went to check it out.  I talked to a lady that was there about getting inside and she informed me that they don’t do that anymore!!!  So I said, “So all those people are standing in line for nothing???”  YEP!  She said that if we wanted to watch them film the outside segments that we needed to come over to this area (pictured below).

So I went back and got the other ladies and we came and got in the front row, but on the side.  It wasn’t a very good spot and it was really cold and windy too.  By the time the show started at 7am we were froze.  We toughed it out for about 45 more minutes and then we gave up and went in search for a HOT cup of coffee.

As we were walking up the street, we found a nice doorman at the Hilton Hotel I believe and he told us to step inside and warm up.  We got to talking to him and he said there was a little cafe right around the corner to get a cup of coffee and a roll.  So we headed in that direction.  The Green Cafe was just the right place to do that!  By this time it was a little after 8am and no of the shops opened until about 10 or so.  So we hung out there for awhile and then walked up to Rockefeller Center.  They just happened to be putting up the famous Christmas tree!  The semi had just pulled in and they were unstrapping it and preparing it to be set upright.  We stood there watching for a little bit but then some of us decided to head up to Central Park.

When we got up to Central Park we looked around for a horse and carriage ride, but found out they didn’t start until 10 am also!  (Seems like we should just have slept in that morning!)  So we just wandered around for a little while.  It was so pretty in the park.  The leaves were still changing colors.

By the time we left Central Park it was right at 10 am so we shopped our way down 5th Avenue.  Our first stop was FAO Schwarz and then we stopped in Tiffany & Co.  A few other stores we stopped and looked in were Coach, Niketown, Express, Gap, etc.  We ate lunch and then Megan and I decided to go get the rental car right away at 1pm instead of waiting until 4pm to do it.  We thought we could avoid the rush hour traffic and just get it done with.  So we headed over to the car rental location and picked up the Dodge Caravan that we were going to drive from NYC to Penn State and back the next day.  It went smoothly and the next thing I knew I was driving down the street in NYC!  It really wasn’t that bad or difficult.  They were all betting on how many times I would get honked at.  And it didn’t happen once (although I did peel out accidentally at a stop light)!

When we pulled into our hotel they said the parking garage that they use is just a half a block down the street.  So we drove over there and pulled in and down the ramp.  I think that most parking garages in NYC are underground.  They are the type of garages that you leave your keys with them because they pack all the cars in so tight and they just move them around when one needs out.  The guy asked when we would be needing it again and we told him that we would pick it up at 5am the next morning.

Then we headed to Macy’s to meet the rest of the group.  Macy’s was already decorated for Christmas.  I was hoping that more stores would be all decked out, but I think that we were about a week too early for that!

After we were done at Macy’s we went back to the hotel to get ready for dinner and the Broadway play that evening.  When we sat down we realized that we had walked over four miles that day!

We decided to eat at a Tapas restaurant before the play and found a good one:  Meson Sevilla at 344 W 46th Street.  It ended up being only about 3 blocks from our theater and it was delicious!  We enjoyed some sangria and some great tapas.  Our favorite was the Patatas Alioli (cubed potatoes in alioli). 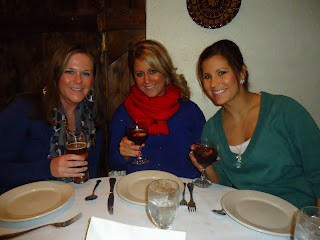 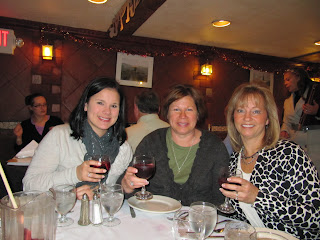 After dinner we headed over to the Broadway play Memphis at the Shubert Theatre.  Here is the description from the website:
Set in the turbulent south in the 1950s, Memphis is the story of Huey Calhoun, a white radio DJ whose love of good music transcends race lines and airwaves. Thanks in part to his passionate persistence, “race” music reaches the center of the radio dial, quickly exploding throughout mainstream America. But when Huey falls for a beautiful black singer he has set on the path to stardom, whether the world is really ready for this music, and their love, is put to the test.
It was a great play, fast and energetic.  Would highly recommend! 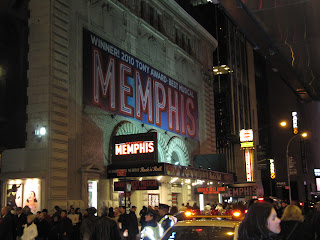 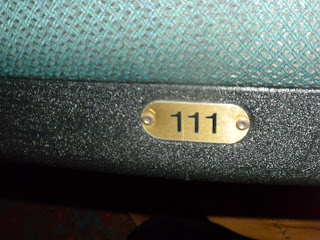 After the play was over, we headed back to our hotel.  We had to get up at 4:15 the next morning so we could hit the road for the 11am game at Penn State!