So I’ve been slacking on getting the last two posts done from our trip to the Big Apple back in November.  So here’s what we did on day three!

Day 3 was game day (the whole reason we were in NYC)!  We awoke early again (4:15am) and left the hotel at 5am to head over to the parking garage to get our sweet mini van.  When we got to the parking garage, the gate was down like they were closed even though I had told the guy the day before that we would be there at 5am to pick it up!  So I yelled through the gate and since that didn’t work, I called the number on my garage ticket.  No one answered, but the gate started going up so we walked down and around the corner.  There was an older gentleman working (I think we woke him up!) and he went to go get our car.  Five minutes passed and then ten and then fifteen.  We were starting to get antsy since we knew it was going to take us at LEAST 4.5 hours to get there (and that’s if we made it out of the city without getting lost!).  I walked down the ramp to see if I could see where he was or what he was doing, but I couldn’t see anything except a lot of cars.  I could hear him moving cars, but I couldn’t see him.  About 30 minutes into our wait, he came back up and apologized for the delay, but the car had got pushed into a back corner so he had to move a bunch of cars to maneuver our car out.  He said it would only be about 5 more minutes.  40 minutes (total) later, we were finally on the road.  Ugh!

According to the directions and the map, it looked really easy to get to the Lincoln Tunnel and get out of the city.  But for some reason we had troubles actually finding the entrance to the tunnel.  Another 20 minutes later, we were on our way out of the city.  It was pretty smooth sailing after that.  We basically took I-80 from the city all the way to the exit to Penn State. 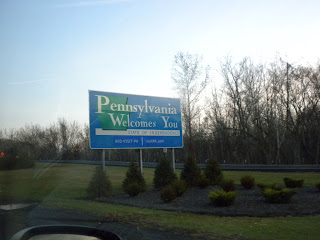 We stopped for breakfast at a McDonald’s along the way and were making really good time until we got off the exit to go to the football stadium.  What was only about 2 miles took us 1.5 hours to drive.  We could literally see the stadium and where we wanted to park, but we just couldn’t get there.  Due to the recent incidents at Penn State, everyone was showing up at the football game just before kickoff.  We were for sure going to be late!  We clicked on the radio to see what they were saying about the game when they mentioned that kickoff was at noon.  We thought it was 11am!  Well it was Central Standard Time, but we were in Eastern Standard Time, so we gained an hour!  Haha!  So maybe we weren’t going to be late!

By the time we parked and hightailed it to the stadium, we literally missed kickoff by a second.  But at least it wasn’t the whole first quarter like we originally thought!  The game was great!  Huskers won and it was such a beautiful day there.  Just a few weeks before Penn State had to scoop snow off the field at half time and there we were getting sunburned! 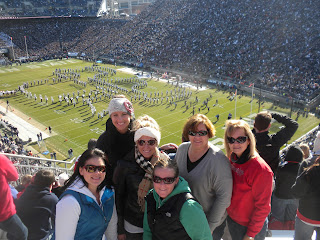 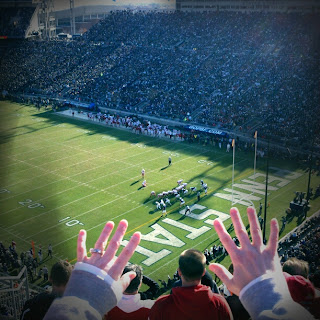 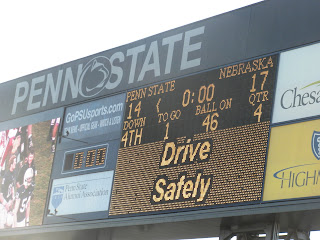 Since I drove the whole way there that morning, I asked Megan if she wanted to drive for awhile after we stopped for dinner on the way home.  She ended up driving the rest of the way back into the city.  I gave her the option before we hit the toll roads to switch, but she said she would rather drive than navigate.  And I have to hand it to her, she did great!  I think she was born to be a big city driver.  She stayed calm when we missed our exit and ended up in a sketchy party of Newark but then got us back to our hotel safe and sound. 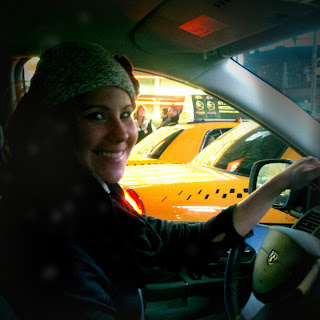 We parked the car and told the guys working what had happened to us that morning (40 minute wait) and they said they would try to keep it on that level for us to pick up the next morning.  We headed to our hotel and had a nightcap before hitting the sack.  It had been a long and tiring day, but the Huskers won and we were there to see it!  Go Big Red!

« Wordless Wednesday: Merry Christmas From Our Family To Your’s
Chores and Christmastime »