Well, we made it through all of our Christmas’!  We started on Friday with Kevin’s immediate and extended family.  There were 17 of us (five kiddos and 12 adults).  It’s always crazy fun when we all get together.  HD is the youngest cousin so he get’s all kinds of attention from his older cousins who don’t get to see him very often.  We opened presents and then had breakfast for dinner that evening.  Kevin’s brother made his scrumptious cinnamon rolls, coffee cake and egg casseroles.  Then we played board games for awhile. 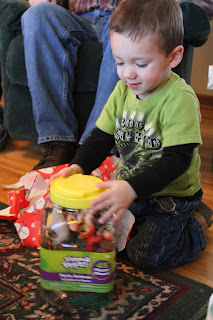 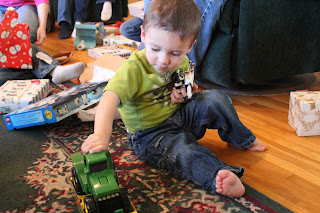 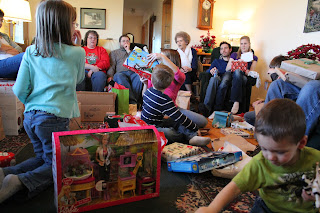 We got home about 9:30 that evening and decided since we were all wide awake that we would open our presents from each other (just the three of us).  I got HD to sit in front of the tree for just a few pictures! 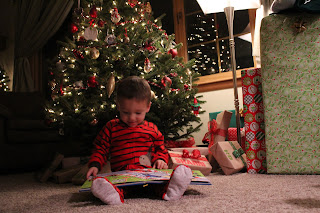 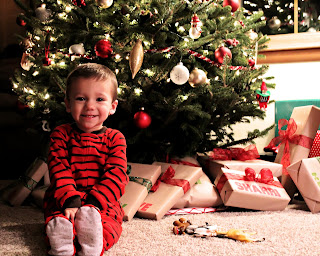 Then he got to dive into the present opening!  He got a wheel barrel to help mommy garden this spring. 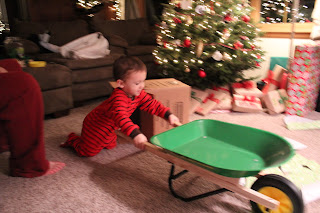 And lots of farm equipment!  It was really hard to get him to go to bed that night! 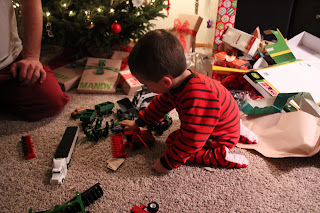 Christmas Eve morning we got up and Kevin did chores while I got HD and myself ready.  We headed out to my parents’ house out in south central Nebraska and got there about 1pm.  We had lunch and then just hung around most of the afternoon.  We all went the children’s program at the church that I grew up in and then came home and ate soup.  Mom always made us soup on Christmas Eve because it was easy to make and eat while she was trying to get three girls dressed up and out the door for the church Christmas program.  So it’s kind of a tradition to have soup on Christmas Eve.  With everyone there, there is only eight of us, but she made four different kinds of soup!  (Chicken noodle, chili, potato and clam chowder.) 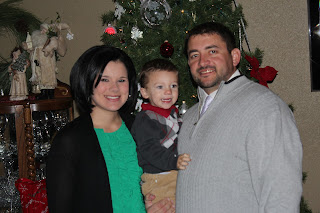 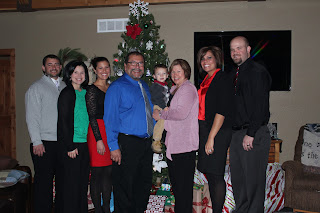 When dinner was almost over, we had a knock at the front door.  It was Santa!  He had a special present for HD.  A trike!  He loved it! 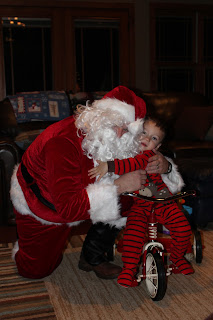 We then opened our presents from each other.  HD got spoiled again.  Lots of clothes and a wagon!  He was so good at opening presents that he pretty much helped all of us open our’s too! 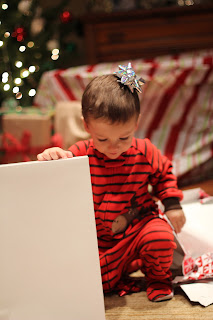 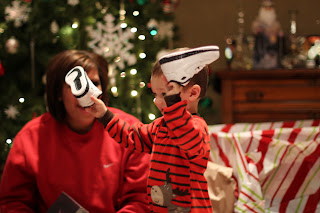 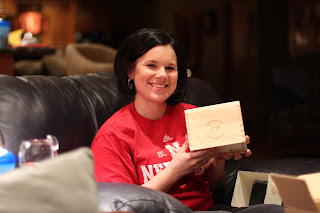 Since he just had to try on his new Air Jordan’s we had to take his p.j.’s off.  So that is why he’s only in a diaper and shoes riding his trike!  He was having so much fun! 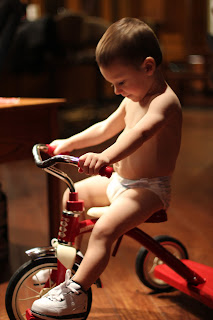 The next morning he wanted Oreo (my sister Megan’s dog) to go for a ride with him in his wagon. 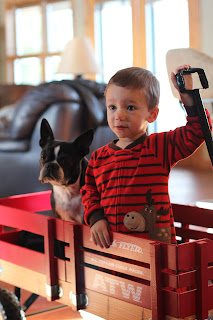 We at lunch at mom and dad’s and then headed home.  We got to our house right at six o’clock last night.  We ate dinner and then watched White Christmas.  I had never seen the entire movie before last night, but it was really good!
It felt like as soon as the holiday arrived this year it was over!  It just flew by, but we had a great time with all of our family!  We hope you all had a wonderful Christmas too!