This is long over due (like two weeks!).  But colds and flu have been going around our house and blogging just got put on the back burner while we were on the mend.
So from this blog post, can you figure out where we went on vacation?
Our much awaited vacation was a 10 day trip to southern Florida, the Bahamas and Orlando.  We left on December 30th and flew down to Ft. Lauderdale where we spent three nights.  We had a rental car the whole trip which was really nice. 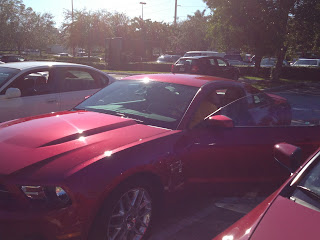 The first day we were there, Iowa State was playing in their bowl game, so we found a sports bar (Eddie Hauck’s Wings N’ Ribs) to sit and watch the game at.  At halftime, Kevin had seen enough, so we just took off and drove around Ft. Lauderdale.

We came across Fernanda’s International Food Market and stopped in to check it out.  They had an interesting selection of groceries along with a deli counter, bakery counter and wine area.  We grabbed a few pastries and hit the road again. 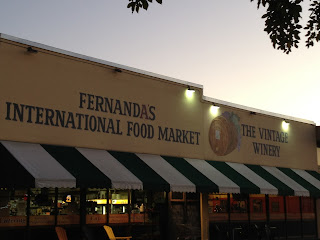 Then we drove down AIA and saw a huge line outside of Casablanca Cafe.  We decided to wait a little bit and then we went to check it out.  We were seated right away upstairs.  It was be best meal we had on our entire trip!  For dinner I had the special which was two lobster tails with a great cream sauce and Kevin had the Chili-Dusted Sea Scallops.  A-M-A-Z-I-N-G!

The next day was New Year’s Eve.  I had made dinner reservations a few months ago, but they weren’t until 8pm that evening.  So we decided to drive up to South Palm Beach and look around.  It was soooo pretty there!  The waters were the prettiest turquoise I have ever seen!  The water was crystal clear so we saw all kinds of fish swimming around and a star fish!  There were also a lot of incredible boats docked there also! 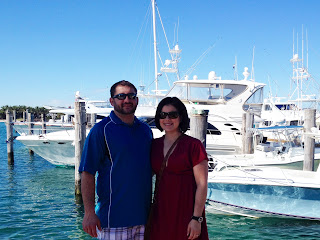 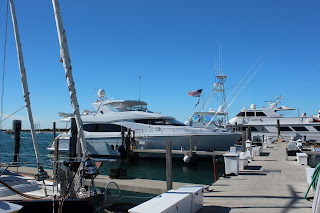 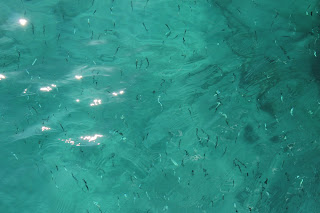 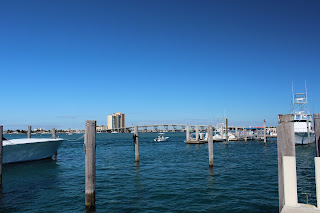 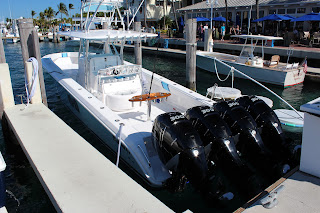 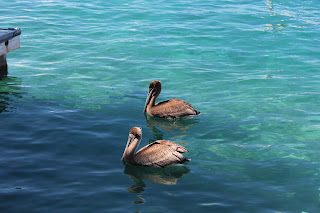 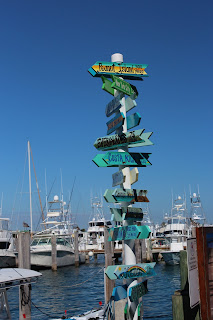 We got back to our hotel just in time to get ready to go out for dinner that night.  I had made reservations at Johhny V’s on East Las Olas Boulevard in Ft. Lauderdale.  It was a great dinner.  To start with we ordered a cheese plate.  That could have been a meal by itself!  Then we had the “Lobster, Lobster, Lobster” appetizer which was great and for our main course I went with the scallops and Kevin had a steak.  They had a special New Year’s Eve menu that night that we ordered off of, but we were very happy with the restaurant!  It was also in a very good location.  East Las Olas Boulevard has lots of restaurants, bars and stores to check out.  After dinner we headed over to Mango’s.  We spent the last few hours of 2011 there and rang in the new year with some new friends that we met. 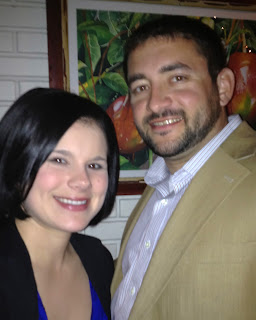 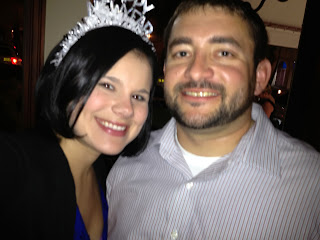 The next day was New Year’s Day and we didn’t have anything planned.  We ate lunch at Luigi’s Coal Oven Pizza where we built our own pizza and then headed down the coast to Miami.  My goal was to get to a beach so we could get a little sun, but we didn’t have beach towels.  So as we drove down AIA, Kevin kept a look out for a place to buy beach towels while I napped.  He decided to pull into a mall that he saw.  I knew right away that we were not going to find any beach towels at this place!  It was the Bal Harbour Shops and you had to have a security guard let you into the parking garage or you could do valet.  Crazy!  Once we got inside, we realized why that was.  Every expensive store you could think of was here!  I’m talking Carolina Herrera, Chanel, Michael Kors, Miu Miu, Oscar De La Renta, Stella McCartney, Vera, Valentino, Dolce & Gabbana, Fendi, Giorgio Armani, Prada, Roberto Cavalli, Versace, Harry Winston, De Beers….Need I go on?  Luckily Kevin was in the mood to window shop.  So we spent a few hours there.  It was fun!  We found a shirt for HD, but decided that $400 for a shirt that he might wear a few times was a little ridiculous!

When we left the mall (without beach towels) we headed over to Miami Beach to find a restaurant that was recommended to us.  The Forge was kind of hard to find at first, but we we’re glad we found it.  They were still cleaning up from the night before and didn’t open until 6pm so we walked around for a little bit.  We came across the Schakolad Chocolate Factory and stopped in for a few pieces of chocolate (or a whole box).  They were delicious!

Then we headed back to The Forge where I had the fish special of the night and Kevin had the “Best Steak in America” which was a NY Stripe.  He was it was good, but not the best.  Nothing beats our own rib eyes that we grill in our backyard!  After dinner we headed back up to Ft. Lauderdale and called it a night.

The next morning we headed back to Las Olas Blvd and stopped in a few shops.  Then we made our way up the coast.  The houses were amazing!  Most of them were waterfront, since Ft. Lauderdale has the canal system.  So not only were they large mansions, but there were also large yachts sitting out front too!  These pictures below were all from a moving vehicle so they are not the best, but you can see how big some of those houses are! 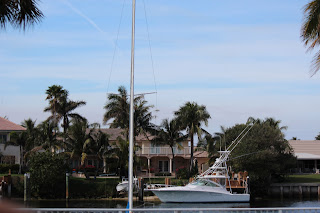 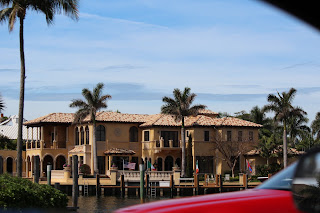 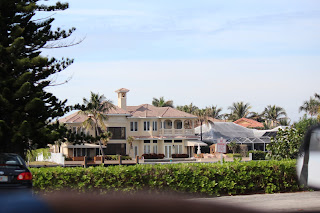 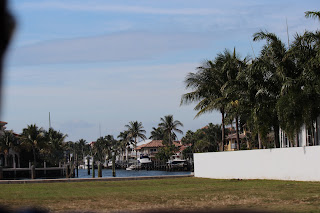 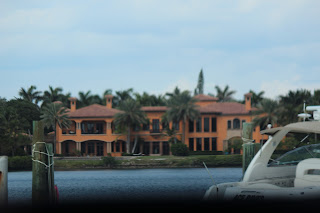 We then drove through Palm Beach which was pretty ritzy too, but we didn’t take time to stop.  We decided it was time to park and board the cruise ship.

We boarded the ship, took our luggage to our (tiny) room and then went to the top deck to eat lunch.  We had a great view of the harbor, but it was starting to cloud up and get pretty breezy.

This ends our Southern Florida portion of our tip.  Stay tuned for more on our vacation!  Next we headed to the Bahamas and then on to Orlando! 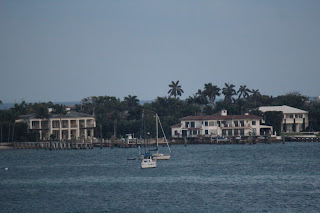 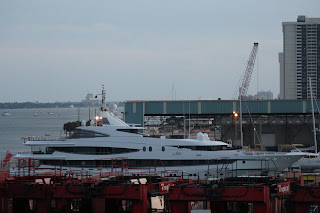