Monday, January 4th was the day that we boarded the cruise ship to the Grand Bahama Island.

When we left the port in Florida, the clouds had rolled in and the wind had picked up.  There was a cold front moving across Florida and it was going to follow us down to the Bahamas unfortunately.  After we got to our (tiny) room and changed into some warmer clothes, we headed up to the top deck to eat lunch.  Then we went to a lounge and watched a NFL game that was on TV.  Our dinner reservations weren’t til 8pm that night and by that time the ocean was getting pretty rough.  I hadn’t really noticed until we were standing in line and I could hardly stand still.  It was really starting to get to Kevin so after dinner we went and found some Dramamine for him to take and then we tried to sleep through the rough seas.  I kept waking up and wondering why babies liked to be rocked so much because I sure wasn’t enjoying it!

By the time we woke up we were in port at Freeport Harbour on the Grand Bahama Island.  It was still somewhat cloudy and pretty chilly there.  So we both put on jeans instead of shorts and made our way to eat a quick breakfast before we got off the ship.

Once we got off the cruise ship, we were taken to the Island Seas Resort about 20 minutes away.  We weren’t able to check in until around 4pm (it was only around 11am) so we grabbed our coats and running shoes from our bags, checked our luggage and then headed to the Port Lucaya Marketplace.  It was about 56 degrees with 20-30 mph winds.  Talk about chilly!  It was actually nicer back in Iowa that day than it was there in the Bahamas.  That was kind of disappointing, but we just made the best of it.

We walked around the marketplace for awhile and then ate lunch at the Caribbean Cafe there.  It was great!  I had the jerk chicken and Kevin had the fried conch.  We did a little more looking around but didn’t really find anything that we couldn’t live without.  So we headed back to check into our hotel. 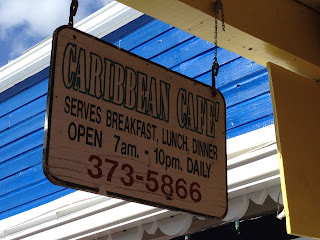 Since it was still soooo chilly, we went and sat in the hot tub for awhile and then walked down to the beach to see the beautiful sunset.  Since it was so cold, the tiki bar was closed, so we ate at the indoor restaurant and then went and rented three movies that we hadn’t seen yet and went back to our room.  We made it through two and a half of them before we fell asleep. 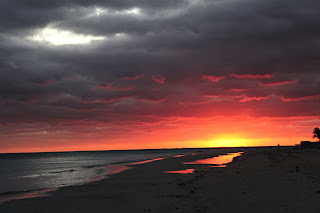 The next morning the weather wasn’t a whole lot better.  It was a touch warmer with no wind, but it was still really cloudy.  We decided to take a walk on the beach and we (Kevin) found all sorts of things.  I guess there were hurricanes that hit the island in 2004, 2005 and 2006 and there is still a lot of “trash” or debris left on the beaches.  The water was as clear as can be and the sand was so fine and smooth but there was just a lot of bottles, tires, etc laying around that you had to really watch where you were walking if you were barefoot. 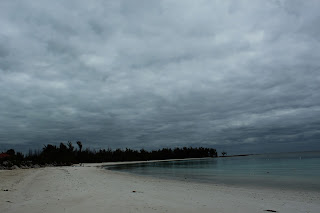 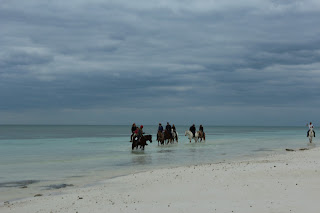 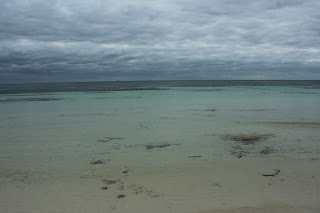 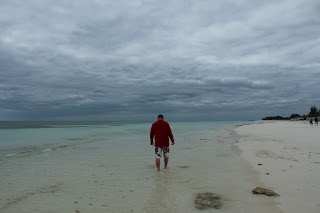 An item that Kevin found was a “walking stick” aka a piece of a tent.  He used this to dig up shells or to try to catch a crab that we found in the water.  The crab was a little “crabby” and ended up nipping Kevin’s heal when he turned his back.  I thought it was pretty hilarious!  That will teach you Kevin! 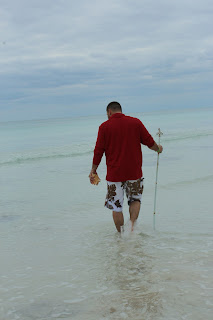 He also found a large conch shell and a sea egg.  We weren’t sure what it was so we asked some ladies that were selling souvenirs on the beach about it.

After our walk on the beach, we went to another marketplace, but this one was pretty deserted.  We did eat at a really good Chinese restaurant while we were there and took the leftovers home with us.  That night we sat in the hot tub again and watched the rest of the movie from the night before.  We also got all packed up so we could board the cruise ship again in the morning.

When we woke up the next morning the sun was out and it was warm outside!  Since we didn’t have to head to the ship until noon, we took a walk on the beach again.  It’s amazing how different everything looked when the bright sun was shining on it!  The ocean was beautiful, the sand was so white and our hotel was so pretty!  There were lots of people out and about.  It was a complete 180 from the last two days there.  And of course it was the day that we had to leave!

At noon we headed to the cruise ship, got checked in and went and laid in the warm sun for a little while.  This was the only time we were able to do this in 10 days!  So needless to say, I was as white when I got home as I was when I left!  Oh, well!

The Bahamas was pretty, but I don’t think I will need to go back there.  Since the hurricanes destroyed much of the island, there just isn’t really many things to do or see.  I’m glad we went and saw it though.  It was so pretty the day we left! 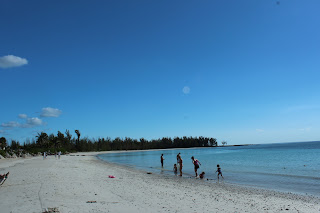 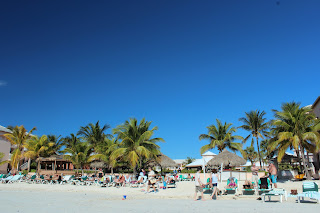 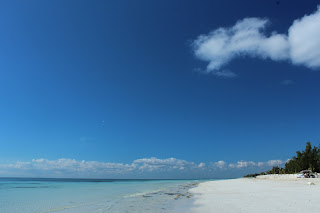 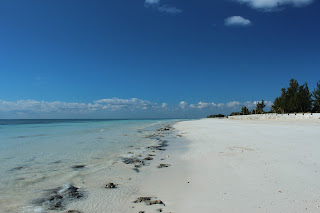 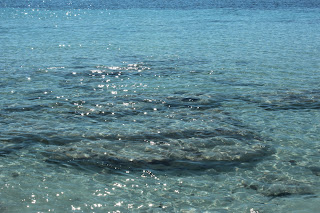 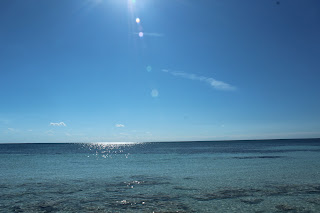 Stay tuned for the final leg of our trip–Orlando!