We celebrated HD’s 2nd birthday this past weekend with family and a few close friends.  Since he’s still to young to know any better, I got to pick the theme and plan the whole party by myself.  But I have a feeling that next year he will have an opinion!
Because of Pinterest, I came up with a Dr. Seuss inspired birthday party.  If you would like to see my inspiration, check out my Dr. Seuss Birthday Theme Board over on Pinterest.
To start with I made up birthday card invites like the ones that I found here from Annie’s Eats using Photoshop. 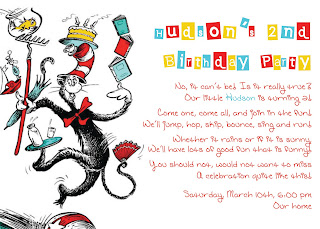 I wanted to make these cupcakes that I found on Pinterest from My Retro Kitchen.  I decided on a white cupcake recipe found here from Alchemy Baking, but that I wanted a cream cheese frosting instead of the buttercream one, so I just bought some Betty Crocker cream cheese frosting, added some blue food coloring and whipped it with my Kitchen Aid mixer.  They turned out great!

Luckily HD slept all afternoon, so he was ready to party when he woke up!  We had bought him this Grinch t-shirt when we were on our trip to Florida back in January thinking he would wear it at Christmas time this coming year, but I decided it was appropriate for his birthday party too!

This blue punch was really easy to make.  All it is is 1 large jug of Blue Hawaiian Fruit Punch, 2 Liters of Squirt and a large can of pineapple juice.  I froze some pineapple rings and maraschino cherries in some water to keep it cold.

In staying with the Dr. Seuss theme, we just had to have Green Eggs and Ham!  We (my mom) made green deviled eggs (I don’t have a specific recipe since she was making them from scratch and she just kind of dumped some mayo, egg yolk, relish, onion, salt, etc in a bowl until it tasted delicious!).  After she got the filling tasting just right, she added blue food coloring first (because yellow (yolks) and blue make green) and then a little green to brighten it up a bit.  They turned out really green!

For the ham portion of Green Eggs and Ham, I found this recipe for Ham and Cheese Sliders from The Girl Who Ate Everything.  They were a big hit!

I also make a Baked Potato Casserole found here which I doubled the recipe and a large fruit salad found here.  Along with all that there was a relish tray, some dip and crackers and chocolate covered peanuts.

I liked the Happy Birthday banner that I saw here from The Hostess With the Mostess so I recreated it using Photoshop and then just tied the triangles together with some ribbon and taped it to the cupboards.   I also used some of HD’s Dr. Seuss books that he already had as decoration behind the food. 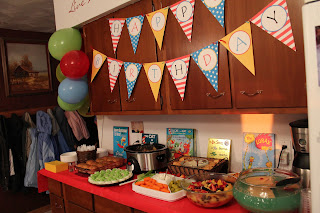 All in all the food was pretty easy to make, but it took me part of the morning and afternoon to get it all done.  But I did it in stages so that helped a lot!  And my mom and sister, Megan, showed up to help with the finishing touches.  (THANKS!)

When everyone arrived, we ate first and then headed downstairs to open presents.  HD had a lot of help from his cousins and his friend Q! 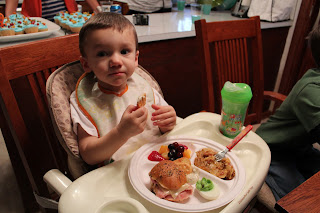 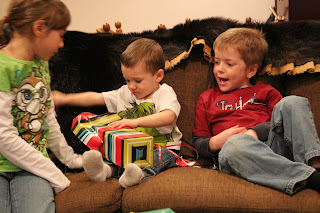 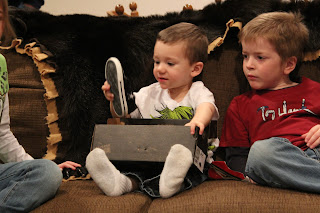 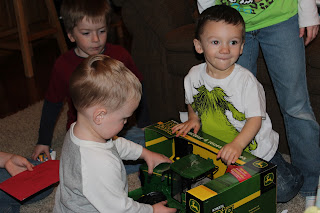 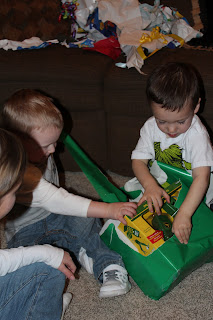 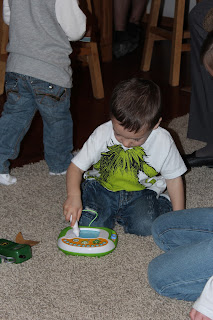 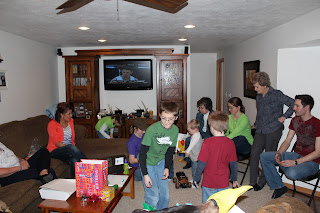 He was pretty spoiled!  He got some new learning games, clothes, a sandbox, a big John Deere tractor, a remote controlled monster truck, gardening tools and many other things!

After presents we headed back upstairs for cupcakes.  Q beat us up there and was the first one to dig in! 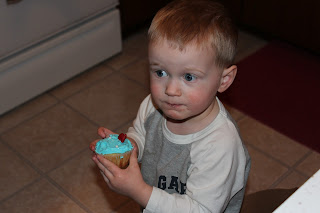 We sang Happy Birthday and HD tried his hardest to blow out the candle, but the way he sticks his bottom lip out, it makes the air go up not straight out! 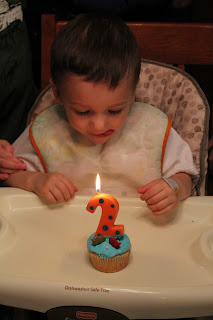 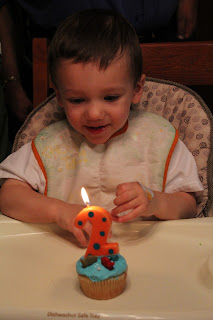 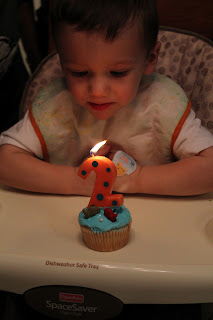 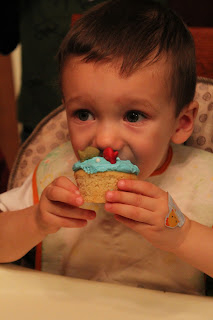 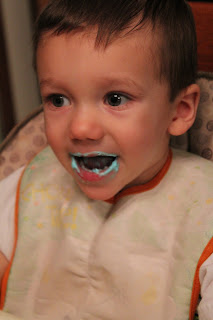 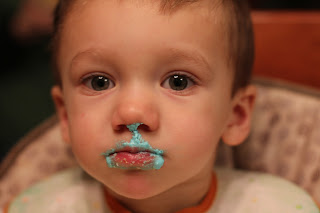 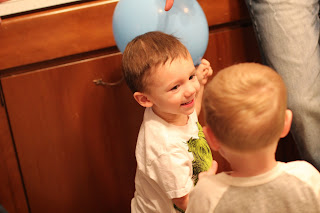 To end the big birthday celebration, I recreated these Thank You cards that I originally found on Pinterest.  They are from Kelli Maree’s Etsy Shop.  They will be going out the end of this week, so if you receive one and you read this blog, act surprised! 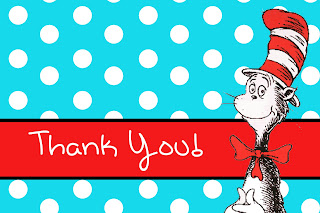 The party turned out great and was a lot of fun!  Thanks to everyone that came and helped us celebrate!