Yesterday was our five year wedding anniversary!  Seems like just yesterday I was getting ready to walk down the aisle, but then I think about all that we have done in the past five years and in some ways that makes it seem like so long ago!

Kevin has been gone the last three days and when he got home last tonight he left HD’s birthday present in the car while we ate a quick dinner.  Then we went outside and Kevin plopped a cute little puppy on the ground!  And then he plopped the SECOND PUPPY on the ground!  Oh Kevin!  He was suppose to go look at the two puppies and was going to bring the girl puppy home, but he couldn’t pass up the boy puppy too! 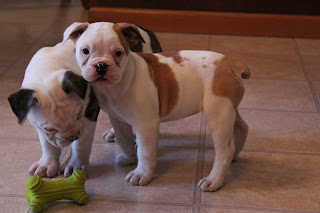 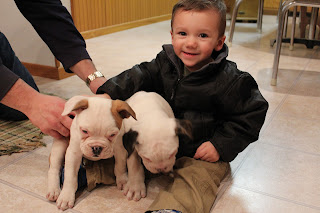 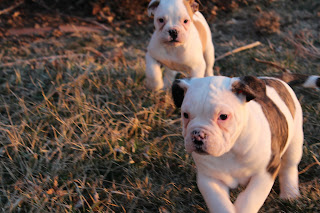 We were originally planning on going out for our anniversary, but since we had the new puppies we decided to just stay home and hang out together.  Also, since we have been traveling so much lately, it is nice to enjoy a home cooked meal!  And it’s fun to try out a new recipe!  I made Pork Chops with Pineapple Fried Rice found over at The Pioneer Woman.  I recommend it!  It was so easy and tasty!

After dinner and meeting the puppies, we went next door to visit Grandma Marian and show her the puppies.  You should have seen her face when she realized there were two of them!  Then we all went down to Kevin’s parent’s house to show them the puppies.  Again, their faces were priceless when they realized that there were not only one, but two puppies!  Kevin’s sister, Janet, and her four children were there too!  Between the five cousins they can really wear two puppies out!

They slept from 10pm until 4am this morning when I let them out to go to the bathroom and then they slept until about 7am!  I’m hoping every night is like that!

Tonight is HD’s (Dr. Seuss themed) birthday party, so I sent him down to play with his cousins while I made some food for it.  The puppies are napping and I have cupcakes in the oven right now!  Hopefully the rest of the day goes as smoothly!

« Proud To Be A Mother And A Farmer
HD’s Dr. Seuss Themed 2nd Birthday Party »