What a weekend!  Saturday HD and I headed to Newton, IA with Kevin’s parents to meet up with Kevin at the Iowa Corn Indy 250 race.  It was quite the experience!  Since Kevin is the President of the Iowa Corn Growers Association, he had the privilege of saying, “Drivers start your engines!” at the beginning of the Indy race.  I’ll post more about that all in another post, but I just wanted to start with that.  This was HD’s first race and he did awesome!  The race wasn’t until 9pm that night, so it was well past his bedtime by the time the race was over, but he was still a happy little boy! 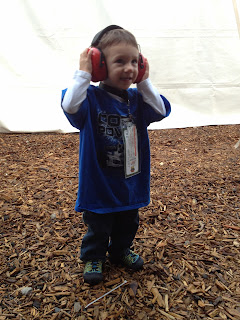 We had some firsts this weekend that only parents will understand how important these little milestones are!  First, potty training seemed to start making sense to HD over the weekend.  He’s been doing so well at daycare, but when he comes home he won’t tell us when he has to go.  He didn’t have any accidents all weekend long other than one at the race.  We’re almost to the point where we can do away with the pull-ups!  Yeah!!!
Another first, is that HD figured out how to spit the toothpaste out instead of swallowing it!  I know that doesn’t seem like a big deal, but we’ve been trying to get him to do that forever and it finally clicked with Kevin the other night.
And the last first was he sat still and didn’t cry during his entire haircut last night!  I’ve been cutting his hair ever since his second haircut when we were charged the same amount as Kevin is.  I told Kevin that was ridiculous and that I could probably do just as good of job.  Unfortunately I don’t have an after picture, but I’d have to say that it is the best haircut that I’ve given him!  Probably because he sat still the whole time!
This morning I have another OB appointment.  I’m at 18 weeks and I had an ultrasound at this appointment.  We could have found out the sex of the baby, but we decided that we don’t want to know again this time.  Which is probably good, since the baby was such a little wiggle worm during the ultrasound.  I don’t know if we could of determined the gender even if we wanted to!  According to the doctor, everything looks good.  He pointed all the parts of the brain, internal organs, etc.  It all was developing and functioning well.  In about 8 weeks I’ll be able to have the 3D ultrasound.  I can’t wait! We didn’t have that opportunity with HD and that was only two years ago!
Well, that’s it for this “Mommy Monday”.  I’ll be posting a Bedroom Remodel post soon and also another post all about the Indy race.  I’m also hoping to get another Topic Tuesday written tomorrow!  So stay tuned!
Has anyone else had any fun/exciting parenting moments lately???