My tomatoes have been slow to ripen, but very soon I think I will be bombarded with tomatoes!  I’ve already tried out a few new canning recipes and thought that I would share them with you here.

Aunt Ione’s Bloody Mary Mix Canning Recipe by Paula at Food.com
This recipe called for 30 medium tomatoes.  Since I was mostly using Roma tomatoes, I used about 55-60 of them.  They were pretty small.  I only ended up getting three quarts from this recipe plus about a half of a pint that I just put in the frig to use soon.  Since I don’t like Bloody Mary’s, I had Kevin give it a taste test and he said that it was just right.  He likes to doctor up his Bloody Mary’s so this left him room to do that!

I’m hoping to make a few more batches soon.  This will be great for tailgating this fall!

Fireball Pickled Tomatoes by Jill Miller on the News-Gazette website
I don’t have a picture of this yet, since I haven’t gotten around to making these, but they sounded quite interesting!  They would be an excellent garnish to the Bloody Mary mix that I mentioned above! 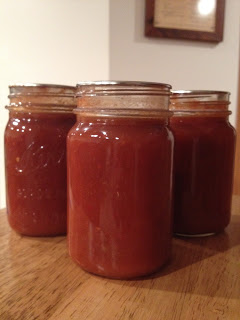 This sweet and spicy chili sauce adds a delightful zing to barbecued chicken or pork. 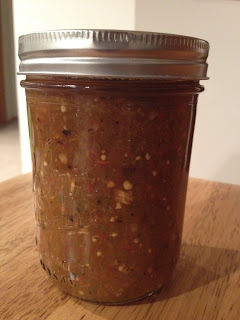 (Note: this recipe is for a small batch that you can just put right into the refrigerator or eat.  I decided to quadruple the recipe and can it.  The changes that I made to the recipe are: 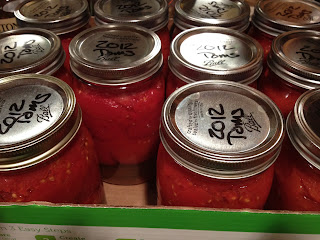 Raw-Packed Tomatoes with No Added Liquid from my Ball Complete Book of Home Preserving
Ingredients
Tomatoes
Bottled lemon juice
Salt (optional)
Directions
I hope you enjoy some of these recipes!  Let me know if you have any yummy recipes to try out!  I have a feeling I’ll have plenty of tomatoes soon!