Less than two months until the new baby arrives!!!  Crazy!  I feel like the time has just flown by!  For some reason I thought that this pregnancy would drag out more.  I have no idea why I thought that!  I asked Kevin the other day what I did before we had HD and a garden.  He said that I used to scrapbook, quilt and make jewelry.  Oh, ya!  I remember those days! 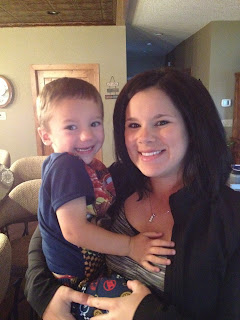 Our lives have changed so much since I was pregnant with HD just three years ago.  Right now, if I’m not working or chasing after HD, then I’m out in the garden picking peppers or tomatoes, canning whatever I picked from my garden, or working on another house project, or as Kevin calls it “nesting”.

There have been a number of things on our (my) to-do list to get done around the house for awhile now, and now I’m trying to hurry up and get them all (or most) done before the little one arrives!  The last few weeks, I’ve been going through all of our closets and reorganizing them to utilize all the space that I can.  This week, I’m planning on painting the living room and kitchen along with the ceiling in both rooms.  (Before and After pics to come!)  I’m hoping to get all the painting done this week, so then we can start on the other things on my “to-do” list.

As for HD, he’s really growing up it seems!  I measured him the other day when he turned 2.5 years old and he has grown 3.5″ in six months!  (And gained four pounds.)  Everyone kept saying that he seems to be getting taller, but I wasn’t expecting 3.5″!

This past week I rearranged some furniture in his bedroom to make room for his new toddler bed.  He was so excited when we brought it home from Grandma’s house.  When we stay out there for work, he always wants to sleep in the big bed that’s in the same room, so she just told us to take it home for him to use instead of buying a new one.  So that’s what we did last week.  We had to immediately move the mattress from his crib to his bed along with all of his blankets and stuffed animals.  He has shown every single person that has stepped foot inside of our door his “new” bed.  (I’m not sure why he looks so big in a toddler bed, but still so small in his crib. They are the same size!) 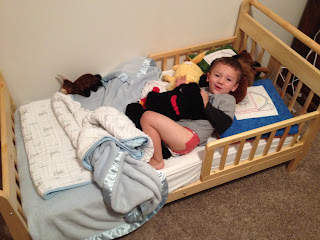 HD’s always been easy to put down for bed at night, so I wasn’t expecting this new transition to be hard at all.  The first night went perfectly.  Then the next day for his nap went smoothly too.  Then that night, he figured out that he could just get out of bed and come out of his room whenever he wanted.  I was already in bed at that time and Kevin was out combining still.  Every time I heard the door open, I just said, “Get back in bed!”  Finally he got tired enough that he stayed there.  Last night he got up a few times and if he hears a train go by, he comes running, but he goes right back to bed.  So it’s going pretty smoothly so far.

Another milestone is happening today.  We’re going to big boy underwear full time now.  Even at night!  He’s been doing so well for quite awhile now, but we still kept him in pull-ups.  Since those aren’t the cheapest things in the world, I told him that we weren’t buying any more and that he had to wear his underwear all the time now.  I’m sure we’ll have an accident now and then, but hopefully he’ll do well enough and we won’t have to use any more pull-ups!  My goal was to have him completely potty trained by the time the new baby comes.  We’re cutting it pretty close!

Well, that’s all for this post.  I’m making a schedule of the next few weeks blog posts, so hopefully I’ll be blogging on a more regular basis!  Wish me luck!  🙂  Happy Monday everyone!