Yep, I turned the big 3-0 a few weeks ago!  Can’t believe it!  I remember listening to Tim McGraw’s “My Next Thirty Years” when I was only 18 and it seemed soooo far off.  And now it’s here.  Most days I don’t feel any older, but my boys keep me on my toes!
We decided to head to Colorado for my birthday and the Western Stock Show or should I say the Western Stock Show and my birthday!  This was going to be the first long road trip for Axten so we decided to break it up into two different days.
We left Thursday night and headed 3.5 hours west to my parent’s house and spent the night there.  Then we got up on Friday and drove another six hours to Denver.  Normally we go skiing with my parents, but they were just coming back from another vacation and couldn’t go with us this time.
When we got to Denver on Friday we got checked into our hotel and unloaded the car.  Or should I say Kevin unloaded the car.  Not sure how four people can pack so much stuff, but of course we needed it all brought into the hotel (we did the same thing the night before at my parents house).  We definitely need to work on our packing skills!
We relaxed for awhile and then headed over to the rodeo at the stock show.
We walked around the trade show part for awhile with our friend, Kayla, who lives in Denver. 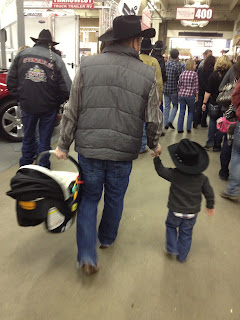 HD just HAD to sit on all the tractors and test drive them. 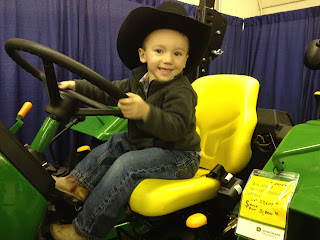 Then we headed over to the rodeo.  This was HD’s (and AJ’s) first rodeo and he loved it!  AJ, not so much.  It was pretty loud in there and I had to leave for awhile to get him to go to sleep.  Probably won’t be taking him back to a rodeo until he can actually sit and enjoy it like HD did! 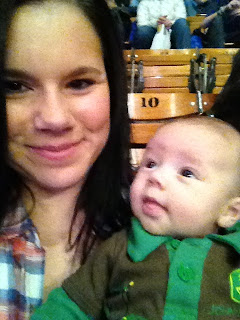 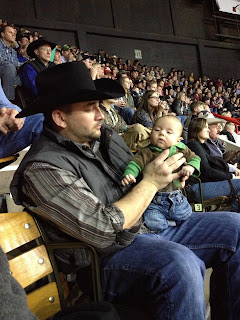 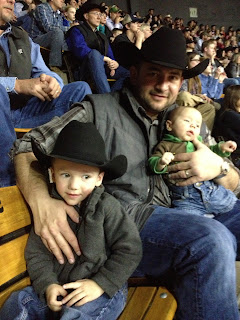 The next day (Saturday) Kevin and HD headed back to the stock show to walk around and look at all the cattle.  AJ and I decided that we would have more fun shopping with Kayla.  So off we went. 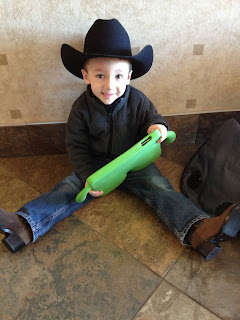 Around 4 or so that afternoon I picked Kevin and HD up and we headed up the mountain. 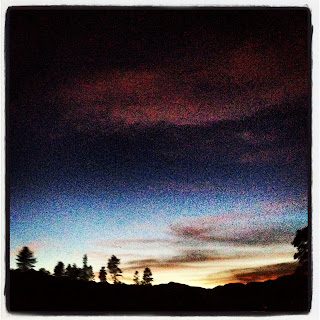 We got to the condo, unloaded, went and ate supper and then stopped to get a few groceries.  When we got back to the condo and started getting the boys ready for bed, we noticed that HD had a cough.  Both boys were perfectly healthy up until this point.  His cough got progressively worse as the night went on.  On top of that we had a hot water issue at the condo.  So no one got much sleep that night.
By the next morning, AJ was starting to get sick too.  Kevin got puked on three different times.  I eventually did too.  Poor kiddo.  Both boys had bad coughs, runny/stuffy noses/fevers/no appetite.  I sent Kevin to the Target pharmacy with a list of medicine to get us through the day until I could take them to a clinic the next morning.  I swear he came home with half the pharmacy! 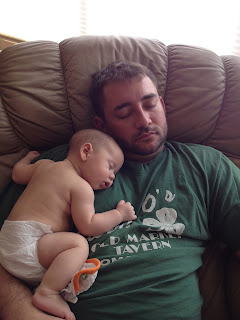 There was a lot of sleeping and snuggling going on at the condo.  HD was feeling so bad that he actually stopped talking and asking about skiing.  I made the mistake of mentioning that we were going skiing about two weeks before we left.  And just about every single day he asked if we could go that day!  We were going to enroll HD in ski school and AJ was going to go to the resort daycare while Kevin and I skied together.  But obviously none of that was going to happen! 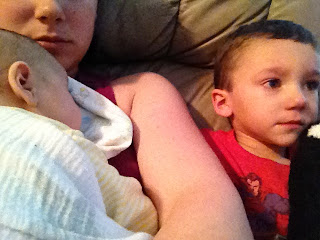 First thing Monday morning (my 30th birthday) I took the boys over the the clinic right there at the ski resort.  On top of having upper respiratory infections (aka really bad colds), they both had ear infections.  Ugh!  No wonder they felt and look so bad!

So off I headed to the Target pharmacy to get antibiotics for both of them and then it was back to the condo for more snuggle time.  Neither of the boys had any appetite.  We were really starting to worry about AJ since he couldn’t hardly keep anything down.  We just did about an ounce at a time and that seemed to work most of the time.

That night, Kevin went and got Chinese food and we were able to eat it together while AJ slept and HD watched cartoons.  We finally got him to eat some soup, but not much of it.

We had contemplated heading back to my parents after I took the boys to the doctor, but we decided to stay put and hopefully they would feel better by Wednesday after they had medicine in their system for a few days.  Well, Tuesday night was by far the worst night for HD.  He had a high fever and just tossed and turned all night long.  He wanted me to lay with him and scratch his back. 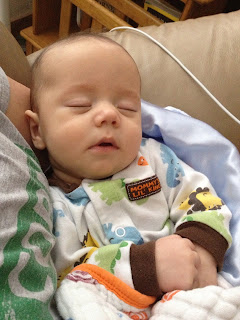 When everyone woke up on Wednesday morning, they seemed a little bit better.  We took our time getting everything packed up and finally hit the road around noon.  We drove over the Continental Divide on our way home.  It’s so pretty up there!  Luckily both boys slept most of the way to my parents so the drive went fast.

Can’t say that was how we planned to spend my birthday, but oh well.  What do you do when your little ones get sick!  We’ll get to go back to the mountains again, but next time we’ll make sure Grandpa and Grandma can go with us!  🙂