Our little man turned three last week!  I just can’t believe that is possible.  He’s such a good little boy, we are very lucky parents.
HD is all about sports right now and we all can’t wait for it to warm up so he can play outside.  So I decided on a sports theme for this birthday party with concession stand type food (i.e. hotdogs, pretzels, popcorn and cupcakes).

My sister, Morgan’s, mother-in-law made these delicious cupcakes for the birthday party.

HD has an issue with blowing straight ahead.  He sticks his bottom lip out too far so the air goes up instead. 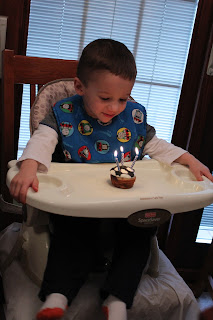 He tried his hardest and finally got one candle out and then he had a little help from his grandma and grandpa who were standing close by!

After the cupcakes we all headed downstairs to watch HD open his presents.  He got some games, clothes, farm equipment, a baseball bat, glove and basketball hoop.  He was so excited when he opened the glove from us that he just had to put it on right away.  He soon realized that it was kind of hard to open presents one handed because he still had on the baseball glove that he decided to let his friend Q help him. 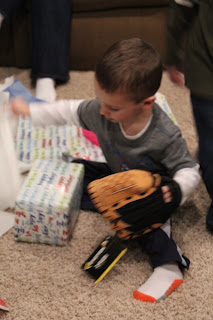 Then he had to play catch with daddy. 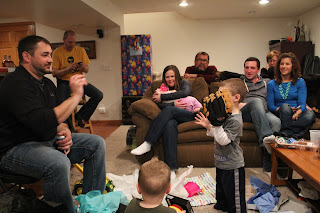 After that he finally got to open the big present which was a basketball hoop from Grandpa Jim and Grandma Sharri. 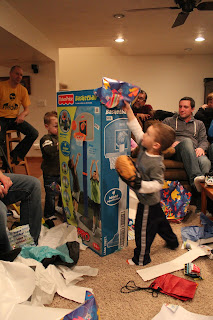 The boys had to try it out for awhile.  Luckily we had another basketball so they could each have one! 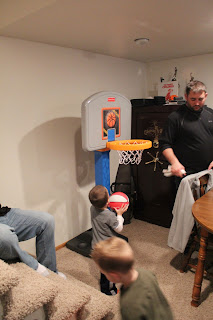 You could tell that the party was coming to an end when it was getting close to nap time!  HD has a great time with his family and his friend Q.

Q and HD’s younger siblings are only 3.5 weeks apart.  I had to prop them up on the couch for a quick picture of them together like we did with Q and HD when they were this little!
We all had a great time with everyone that was able to come and celebrate with us.  That day just happened to be Kevin’s and my 6th anniversary too.  A lot has happened over the past six years!  🙂