My husband, Kevin, is the sixth generation to farm on his family farm where we live in southwest Iowa.  That means that our two boys could be the seventh if they choose to farm down the road.  Crazy, right?  It’s hard to imagine what it was like for Kevin’s great-great-great grandpa to farm back in the 1800s on the land that we live on now.  It’s hilly, we have lots of terraces, usually get decent amounts of rain, lots of wind (strong winds), sometimes drought, but nowadays we raise crops that can withstand all of that much better than the generations before us.

Technology has advanced greatly over the past generations and is making it easier for farmers to grow a healthy crop that will be used for many different things-food, fuel, fiber, livestock feed, etc.  Something that has been used more and more over the past few decades is GMO (Genetically Modified Organism) seed.  Nowadays, there are so many ways for information to spread to consumers and it’s not always correct.  It was brought to our attention when CommonGround did a Gate-to-Plate survey recently, that consumers think that GMOs are dangerous, unhealthy and bad for the environment as seen on the infographic to the left.  This if far from the truth.

GMO seeds are created to help feed the ever-growing world population.  It is a seed that allows farmers to grow more with less; less land, less water, less chemicals, less pesticides, less passes over the field with farm machinery, etc.

By creating a GMO seed, scientists are taking specific genes from one plant and putting them into another plant to create a plant that is less susceptible to drought, wind, insects, etc.  According to the World Health Organization, it defines genetically modified organisms (GMOs) as organisms in which the genetic material (DNA) has been altered in a way that does not occur naturally.  It allows selected individual genes to be transferred from one organism into another, including between non-related species.  Such methods are used to create GMO plants-which result in GMO food crops.  This technology is called biotechnology.  (CommonGround website.)

With the world population growing at such a rapid rate, we have to be able to grow more crops to keep up with the demand for food, fuel, fiber, and livestock feed.  The world is just over 7 billion people and by 2050 it will be well over 9 billion.  And with the rural areas diminishing greatly, farmers are going to have to find ways to grow more on less land.  Without this technology, we wouldn’t be able to farm the way we do today and feed as many people around the world as farmers do.  Thank goodness we have GMO to help us do that! 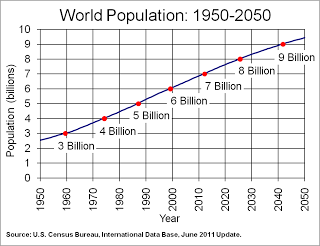 As seen on the Gate-to-Plate survey that I blogged about recently,  “All GMO foods are still exhaustively assessed for safety by groups like the FDA and USDA.  In the 12-plus years that modern biotech crops have been commercially grown, there has not been a single documented case of an ecosystem disrupted or a person made ill.  GMO foods are nutritionally and chemically identical to food grown from non-biotech crops.”

I know I’m only touching the surface about GMO seed, but I wanted to start with this information and then see what questions I get from you all.  After that I will do another in-depth post in the near future.  So if you have questions, please ask away!  As a farmer, we love to be asked questions about farming and agriculture!  Hope you all have a great weekend!