Tuesday evening we had Kevin’s parents, brother and sister-in-law and grandma over for a fun and delicious supper.  Earlier that day we had decided to make grilled pizzas for supper and when I was reading a recipe that I was going to be using, I thought it would be fun to invite some family over to help us eat it.
For starters, on Pinterest I saw this recipe for Grilled BBQ Chicken Pizza with 10 Minute Pizza Crust from Mom on Timeout.  She divides the dough into about 7 or 8 portions so everyone can make their own pizza.  So I thought it would be fun if I put together a bunch of toppings and then everyone could build their own pizza and we’d cook them on the Big Green Egg smoker outside.
It was an absolutely perfect evening to cook and eat outside and everyone had a great time building their pizzas and catching up with each other. 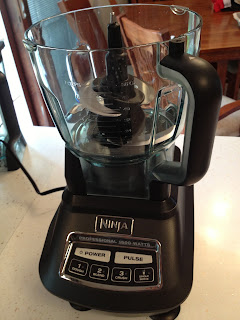 I also used my new Ninja blender with the food processor bowl to whip up two batches of the pizza crust.  It worked great!  It was so fast and the clean up was so easy!  Just threw it in the dish washer!
I used Trish’s recipe for the pizza crust.  The only think I did differently was that I used a package of Red Star Quick Rise Yeast instead of a package of Fleischmann’s Pizza Crust Yeast and I let it sit and rise for about 15 minutes before rolling out the individual pizza crusts.  It was really easy!

The ingredients that I prepared were:
You can obviously have more or less toppings, but this is what I had for that night.
How I did this was I cooked the chicken and bacon first.  Then made the two batches of dough.  Then while the dough was rising I chopped up the fresh veggies.  I put each topping into it’s own bowl and set them all out where it was convenient for everyone to top their pizzas. 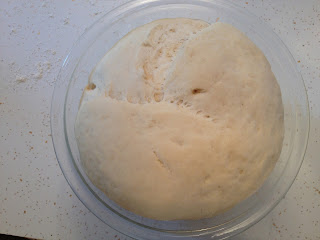 When we were ready to start assembling the pizzas, I punched down the pizza crust dough and divided it into eight portions. 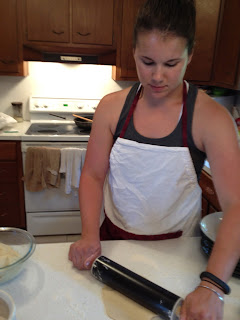 Then I rolled each one out into somewhat of a circle shape.  The recipe said that they should look “rustic” so that made it a lot quicker and easier to roll out since it didn’t  have to be a perfect circle! 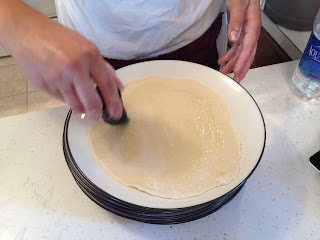 Next I brushed both sides of the dough with olive oil and placed them on plates. 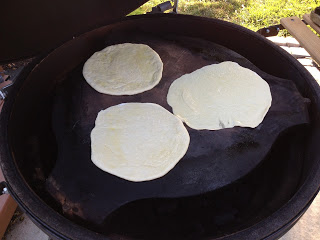 Then we placed three of them at a time on the hot pizza stone in the Big Green Egg for about 3-4 minutes at about 350-400 degrees. 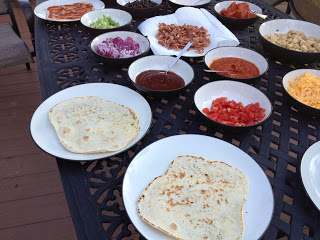 When the bottom side was done, we took them off and placed the done side up.

Then we topped the pizzas with whatever toppings each individual wanted. 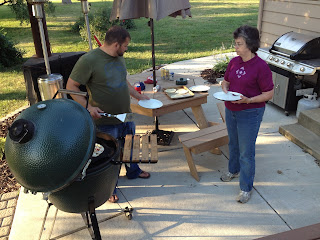 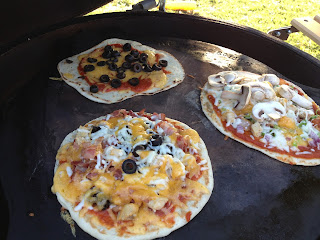 Once you have all your toppings on the crust, you place them back on the grill for another 4-5 minutes or so until the bottom of the crust is done, the toppings are cooked and the cheese is melted. 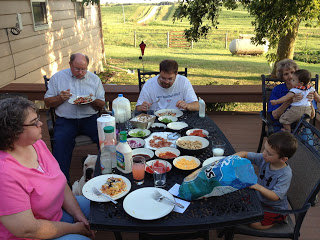 Then you dig in! 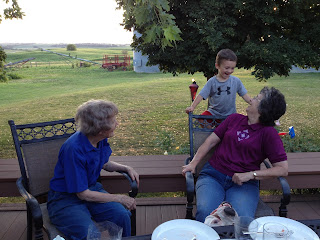 After we were done stuffing ourselves with pizza we had Jim’s (Kevin’s brother) famous apple pie for dessert.  It was delicious!  Then HD entertained us for awhile before everyone had to head home.  What a fun evening!