Up until a few weeks ago, Panera Bread was my favorite place to stop and grab lunch if I was running errands in town.  That all ended when Panera Bread launched a new marketing campaign that was very misleading to consumers and highly offensive to farmers.

Their new marketing campaign featured the EZChicken.  The “chicken” was in the shape of a pill (aka an antibiotic).  You can see in the ad below that he says, “Sure, I was raised with antibiotics.  It’s just easier.” 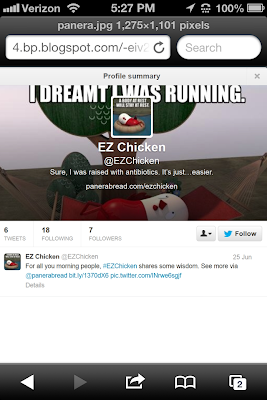 I’m fine with a restaurant serving antibiotic free meat.  It’s a choice.  What I’m NOT OK with is what Panera Bread says in the following ad, “Hard work pays off eventually.  But lazy pays off now.”  They are saying that farmers who use antibiotics on their animals are lazy!  Do they have any idea what farmers go through to raise healthy, nutritious meat on a daily basis for consumers???  I don’t think they do! 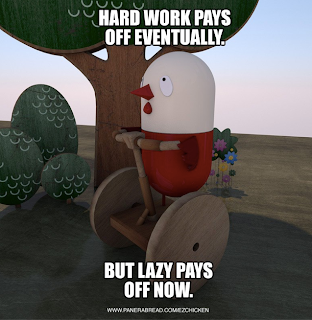 Antibiotics are only given to animals on an as-needed basis.  It’s just like with humans.  If we get sick, we go to the doctor and get an antibiotic to make us better.  Same thing with animals.  If one of them gets sick, the vet helps the farmer administer an antibiotic to help it get better.  Farmers don’t just go handing out antibiotics left and right!  They cost money and are only used when needed.  You can read more info about antibiotic use in animals on the CommonGround website. 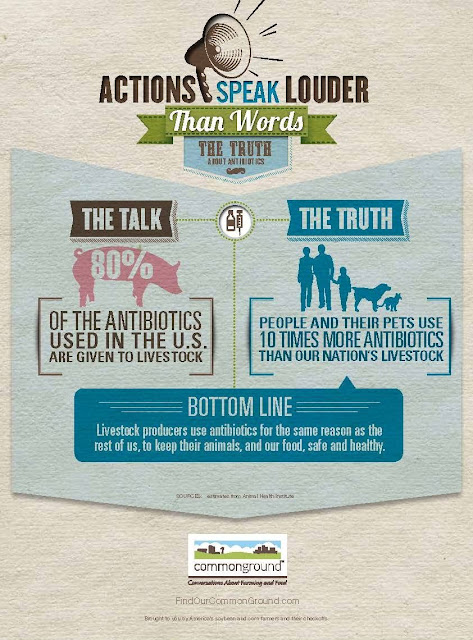 Something funny about any company’s “Antibiotic Free” campaigns is that by the time any animal enters the food system, they HAVE to be completely free of any and all antibiotics.  They are tested by the U.S. Food Safety and Inspection Services (FSIS) before they are processed.  So if an animal is given an antibiotic, depending on the type of animal and the type of antibiotic, they have to wait a certain period of time before being processed and sold to consumers.  So ALL food that you buy in the grocery stores are antibiotic free!

Many farmers have spoken out about this campaign.  Katie talks about why she is furious with Panera Bread.  Lara talks about how to pluck the EZChicken.  Another Katie goes over the Panera Bread Truths and probably the most widely shared blog post about this whole situation is Dairy Carrie‘s letter to Panera Bread.  It garnered so much attention that the Chief Marketing Officer from Panera Bread personally called her.  You can read about their phone conversation here.

It sounds like they are going to take some of the offensive ads down, but that’s not going to “fix” what they have done.  They’ve used scare tactics to get their consumers to think that their chicken is better and insulted farmers in the process.  Other companies that serve antibiotic free foods haven’t done that.

Again, I’m all about choices for consumers.  If someone wants to serve or buy antibiotic free chickens, by all means go ahead!  But Panera Bread and all other restaurants out there, please don’t use misinformation to scare your customers into thinking that your food is better than others and PLEASE don’t insult the people who raise your food!

Until Panera Bread makes a formal apology to farmers and fixes their campaign strategy, we are staying strong and promoting #PluckEZChicken on Facebook, Twitter, Instagram and Vine.  Join us in telling Panera Bread how you feel about their new marketing campaign! 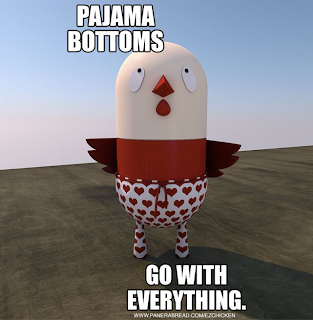 And pajama bottoms DON’T go with everything!