Last Monday was so hot.  On the way back to my office after lunch, my car’s temperature read 105 degrees outside.  It was hot, hot, hot! 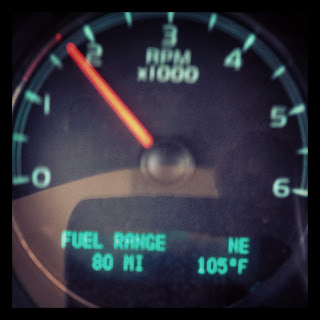 About 4:15 that afternoon, I received a phone call from Kevin.  He said that our hay bales were on fire and that the fire department was there.  When asked what started it, he said that they just got to hot and started themselves on fire.

I decided to head home to assess the situation before getting the boys from daycare.  From a few miles away, you could see quite a bit of smoke.  (It’s really hard to see in the picture below.)  The wind was out of the south, so it was blowing the smoke north.  This caused Kevin (who was home at the time) to not realize anything was happening until one of the neighbors pulled in to tell him. 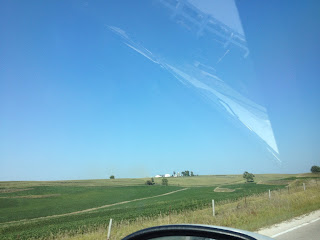 Our house on the farm is the farthest south, then Kevin’s grandma’s house is just north of our’s, then the large shed and then the hay bales.  The hay bales were about 20 yards away from our new shed and then a corn field was about 20 yards on the north side of the bales.  Luckily we didn’t loose anything else with this fire.  IF it have been a few weeks later and that corn field was drier, we might have lost that too.  That afternoon the fire department came out and sprayed everything down and then Kevin proceeded to move some equipment and know down some weeds.  Everything around the pile of bales was pretty green, so Kevin was able to keep it pretty contained to that one spot. 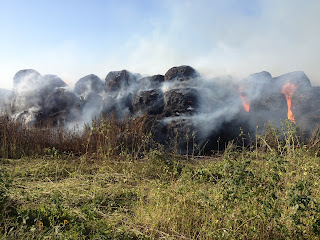 That was all on Monday.  Then on Tuesday he spent most of the day in the skid steer driving around the pile and scooping it up so it could burn.  There was no stopping the fire the day before.  The whole pile was a loss, all 150 bales.  So once it was established that we wouldn’t be able to save anything, we then wanted it to finishing burning so we didn’t end up with a huge pile of black, burnt hay. 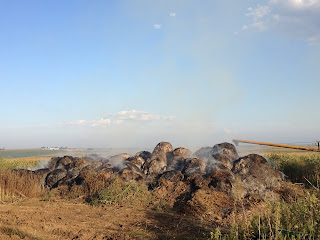 On Tuesday night, the fire was still going strong. 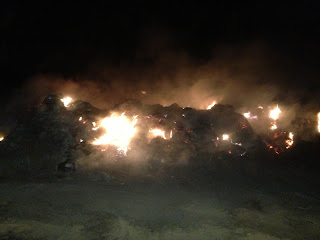 By Friday, the pile had greatly reduced, but was still smoldering (it was still smoldering this morning).  Luckily we were insured correctly and were able to get an adjuster out to our farm right away.  For all of you farmers (and others too!), please make sure that you go over your insurance policy AT LEAST once a year to make sure everything is up-to-date.  It’s so important to make sure that everything is insured properly, because you never know when something like this could happen! 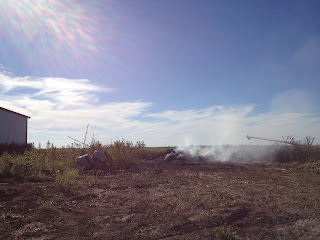 Since that was pretty much all of our bales on that farm, Kevin’s been trying to round up some bales to buy so we can feed our cattle through the winter.  He also decided to chop silage, which they should be doing as I type this.  I’ll get some pictures and explain how that works in another post.  This is our first time chopping silage, but we’ll be able to feed our cattle if we have a long, hard winter this year.

« Chipotle’s Cartoon is NOT Reality!
Chopping Silage on the Farm »