Last weekend I had a large to do list, of which some things got done (like cleaning my house and doing the laundry) and somethings didn’t (like rearranging dining room tables so we only have one instead of two sitting in our small dining room). One other thing that I was able to tackle over both Saturday and Sunday was to use up the remaining apples that were sitting in my garage that we had picked a few weeks ago.  There are still a LOT more to pick, but I wanted to get these used up first.  Since it was pretty chilly out, I decided it was a good weekend to do this.
On Saturday morning, I quartered or halved a sink full of apples and put them in my mom’s juicer.  She’s had this forever.  I’m not sure where she got it, but here’s one that is similar.  How this works is you put the base on the stove and fill it full of water.  Then you put the middle section on and then insert the basket.  You then place your fruit in the basket and place the lid on top (not shown).  After awhile the steam starts extracting the juice and it runs out the hose.  Make sure you keep the clamp on until you’re ready!  The juice comes out of the juicer very hot.  I wanted to can a bunch of the juice for the boys to drink.  So all I did was after it came out of the juicer, I placed it in a large pot.  Once I was done juicing all the apples I brought the juice to a boil and then filled sterilized quart jars and water bathed them for 10 minutes.  Over the two day process I ended up with 10 quarts and 3 half gallon jars of apple juice.  And my house smelled amazing! 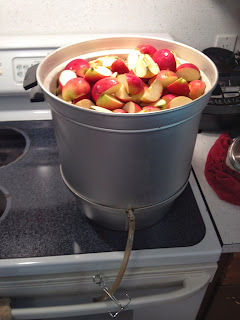 After you are done juicing the apples, you are left with a bunch of pulp and seeds in the basket. 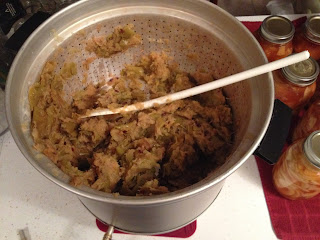 What I did with that was scoop it out and then I ran it through my ricer.  The remainder of the pulp that comes out of the ricer is the perfect consistency to make apple butter!  So I added some sugar and cinnamon (to taste), heated it up (be careful not to let it scorch!) and canned that in a water bath for 10 minutes also.  I ended up with 19 half pints of apple butter!  And the only thing that I threw out was basically just seeds and stems! 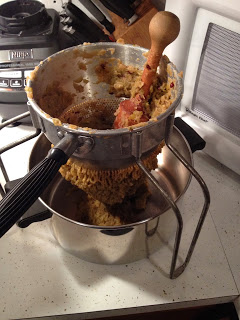 On Sunday I decided to try out an apple pie filling recipe that I found on Pinterest.  Marybeth says that it works great to make a pie, an apple crisp, or heat it up and pour it over ice cream, waffles, etc.  From what I could tell it tasted great.  I might doctor it up a little more when I open a jar, but it’ll depend on how I’m going to use it.  I didn’t take any pictures other than the final product, but it was super easy and I did two batches of it which resulted in 14 quart jars. 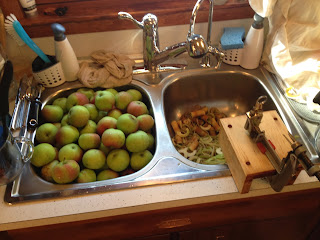 Then after all that work you have a lot of dishes to do.  🙁 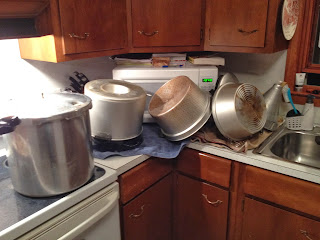 Right before HD went to bed on Sunday night, he got to taste test the apple butter.  I told him that we could put it on some toast.  So the next morning, the first thing he said was, “Can I have some toast with some apple butter?”  🙂  Oh course!  (He asked for it again this morning!  Little guy likes my apple butter!) 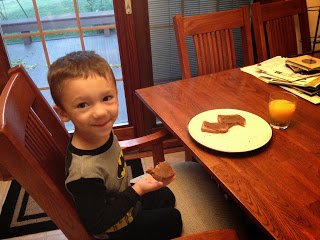 So that was what my weekend consisted of.  Apples, apples, and more apples!  What fun things are you doing with apples?  I have a whole board on Pinterest dedicated to apples.  Can’t wait to try out some more recipes!

« Gearing up for Harvest
My 24-Day Advocare Challenge »