This evening I took HD and AJ to meet Ree Drummond aka The Pioneer Woman!  Luckily Aunt Morgan could meet up with us, because it took at least two of us to entertain AJ while we stood in line for over three hours!
Aunt Morgan beat us to the Baker’s in Bellevue where she was doing her book signing and got us a good spot towards the front of the line…yes, we were at the front and still had to wait for 3+ hours!  I can’t imagine how late Ree’s going to be there tonight!  I heard that she stays until the last person gets their book sign.  She might still be signing tomorrow morning! 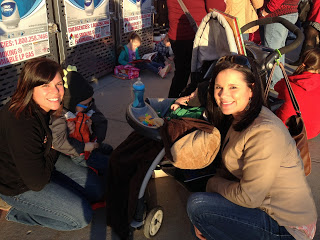 The line seriously looked like a Black Friday line.  It was crazy! 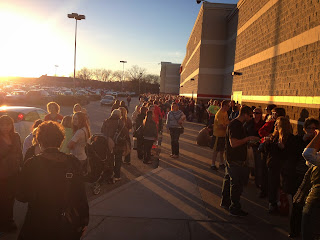 Both the boys were really good while we waited in line.  HD played lots of games on Aunt Morgan’s iPad and AJ ate.  His babysitter said he didn’t eat much today (he’s working on his one year molars), but he sure made up for it in line! 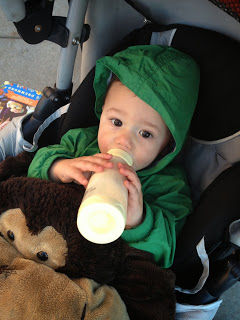 Right before the signing, Ree arrived with her boys, Todd and Bryce.  Her husband, Lad, was there too, but he had to go find a spot to park their car.  It was a packed lot there at Baker’s! 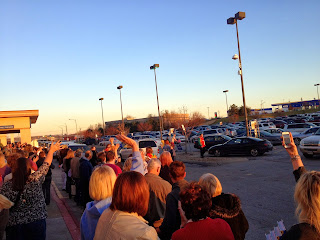 It took Lad forever to walk into the store, the poor guy had to stop and take pictures with every lady along the way! 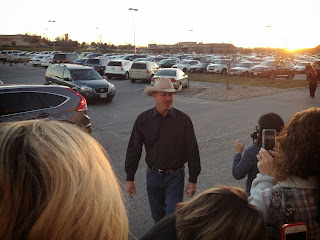 Luckily we got to walk inside right as the sun was setting.  It was about 62 degrees when I got there, but as soon as that sun went down it got chilly!

Right before it was our turn to meet Ree, AJ feel asleep.  The last 20 minutes were pretty rough on him.  He was so tired, but didn’t want to miss anything!  Finally Aunt Morgan got him to go to sleep. 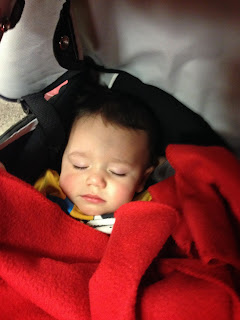 While we were standing in line inside the store, Bryce and Todd walked by.  I asked if HD could take his picture with them.  They were the sweetest boys!  They ducked under the rope and tried to get HD to stand by them, but he pulled the shy card so I had to be in the picture too. 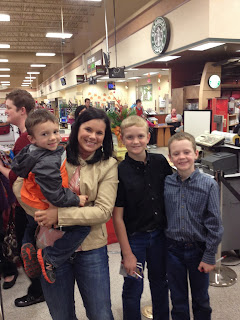 Lad was also right inside the door, but when we got in there, he was trying to leave with the boys.  I think it probably took them an hour to actually get to their vehicle because they had to walk past the crowd again outside! 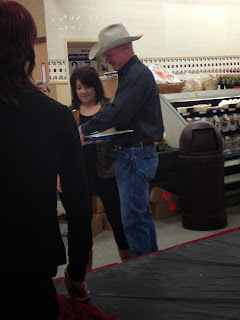 When it was finally our turn to talk to Ree, HD did most of the talking.  It went something like this:

HD: Is Charlie the Ranch Dog here?
Ree:  (laughs) No, he’s too stinky to take anywhere.  He’s home probably sleeping on the couch.
HD:  Our dog is stinky too!
Ree:  What kind of dog do you have?
HD: Diesel
Sara: An American Bulldog
Ree:  Oh, I love Bulldogs!
HD: I’m three and AJ’s going to be one tomorrow!
Ree: Well happy first birthday to AJ!
(Too bad he was asleep the entire time!) 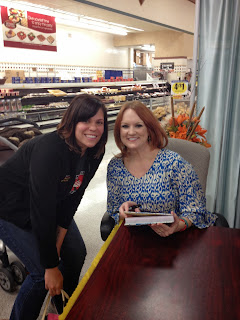 And that’s how we spent our evening!  It was great to get to see Ree again.  I meet her this summer at the BlogHer Food conference down in Austin.  Both times were really quick meetings, but she’s a great person!  Check out her blog (if you don’t already)!  Happy Monday everyone!