Oh where does the time go!  We now have a four year old son!  Crazy!
He’s becoming such a big kid.  He’s so loving.  Out of the blue he’ll just say, “Mommy, I love you.”  It just melts my heart.  He also loves his numbers.  He’s been counting like crazy.  I’ve heard him go up to 120 by himself.  He also likes to count by 10s to 100 and then back down.  He likes learning about directions and telling me when and where to turn when I’m driving.  He’s literally a “backseat driver.”  It’s just amazing how much and fast they learn at this age.
Another thing he enjoys is helping me cook/bake.  When we were discussing his birthday cake he said he wanted a cake and not the cupcakes that I was originally planning on making.  He asked for a Teenage Mutant Ninja Turtle themed birthday, including a Leo cake.  So we (I) decided to make a layer cake.  There were going to be 25 family members so we went with a four layer cake.  Since there are four TMNTs, we made each layer a color of one of them.  So we had an orange, red, blue, and purple layer.  And then LOTS of green frosting!  We went through a lot of food coloring! 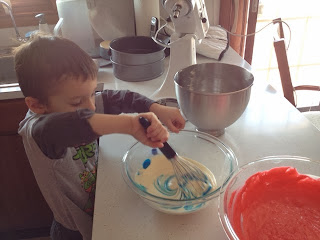 The only bad thing about having a helper when it comes to baking is that I don’t get to like the spoon and bowl by myself anymore! 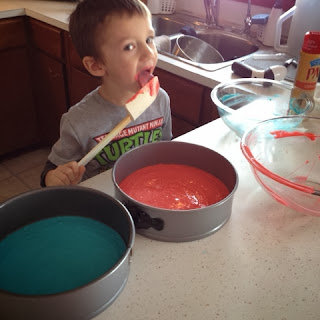 I found this cake by Kate at And Everything Sweet and thought that I could make HD’s look similar.  It didn’t turn out too bad.  I’m definitely not very artistic when it comes to cake decorating, but HD was happy with it and that’s all that matters, right?!? 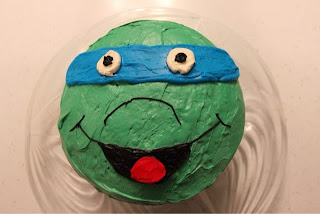 I also saw this cute idea on Pinterest to make Ninja Turtles out of balloons and HD thought that was pretty neat too.  Pretty easy to make a four year old happy! 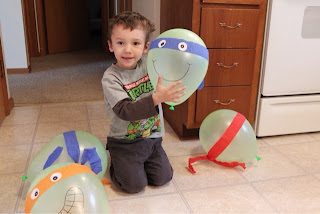 This year we just had family over for pizza (the Turtles favorite food) and cake on Thursday night and we were going to have a little sleep over with a few of HD’s friends but it ended up having to be postponed awhile. 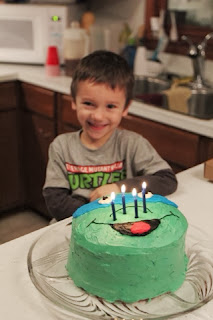 He was so excited to blow out his candles this year.  He needed a little assistance last year, but managed just fine this year! 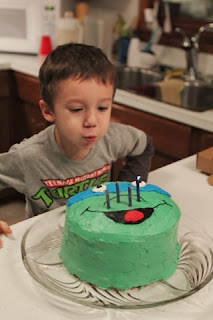 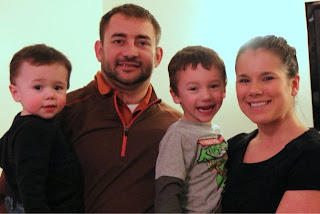 Saturday was actually HD’s birthday so we celebrated that morning with birthday pancakes. 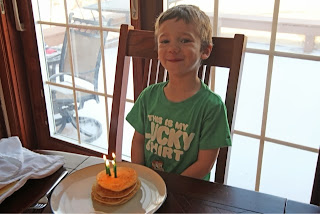 Had a pretty easy going weekend.  Checked cows and found out that there were two baby calves born on his birthday so he was pretty excited about that too! 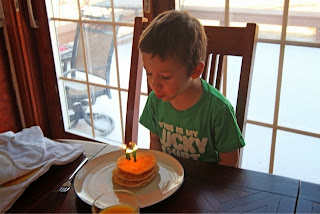 Also, on Sunday Kevin and I celebrated our seventh anniversary!  Well, celebrated should be used lightly!  Kevin did chores all morning and then headed to a meeting that afternoon.  So we didn’t really get to celebrate.  Oh, well!  Maybe next weekend!
Anyone else celebrating birthday or anniversaries lately?  Did you bake a cake that turned everyone’s mouths green like our’s did??  🙂