Yesterday I did something for the first time.  I’ve know Kevin for over eight years now and I’ve never been to any of the grain elevators to deliver corn or soybeans.  Ever!  I know some of you may not think that’s very exciting, or some of you farmers are probably thinking “really”, but my father-in-law used to be the only one that hauled for Kevin and either my mother-in-law rode with him or he would haul early in the morning before work.  So I just never went along for the ride.
Now Kevin hauls the grain to town occasionally and I still hadn’t ever gone along.  Yesterday, I didn’t actually ride in the semi-truck, I just met Kevin at the elevator because we were going to grab lunch together afterwards and you can’t really drive a huge semi-truck to Ruby Tuesday’s very easily! 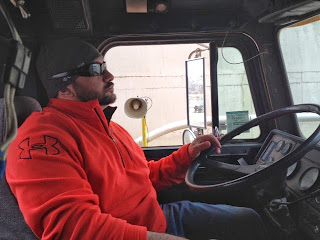 So I met him there and hopped in with him as he drove it through to dump the grain.  I don’t know what I expected, but it was a really simple, quick process.  Probably because there was no one in front of us!  I know sometimes of the year they have to sit and wait hours to unload.  But on April 1st this year there was no line! 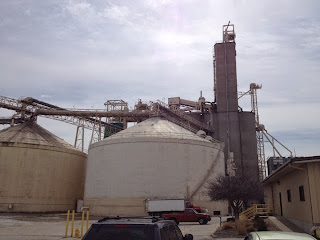 When you first get there you have to stop before you unload the grain so a probe can be dropped down into the grain to check the moisture percentage and quality of grain like in the picture below. 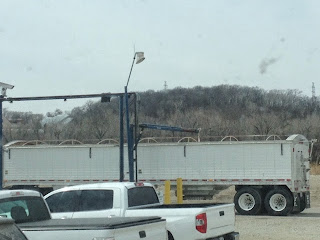 Once you get the go ahead you pull onto a large scale.  It weighs the entire truck which still has the grain on it at this point.  Then you back up and Kevin hopped out to tell them his name and to open the traps.  This lets the corn fall right out of the bottom of the truck and through those metal grates that he is standing on.  This only takes about a minute to do. 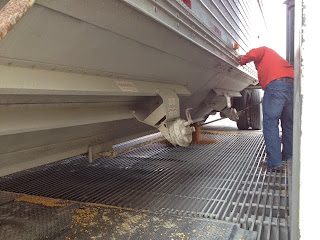 When both the front and back parts of the trailer are unloaded he then drives forward onto the scale again.  This time it weighs the whole truck without the grain.  This will then report to the office how many bushels of corn (or soybeans) we just delivered and they send us out a printed ticket and then we go on our merry way. 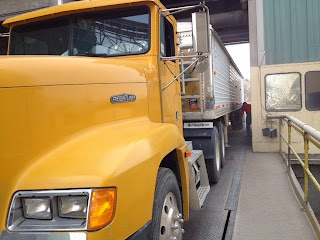 So now, as a farm wife, I can say that I have unloaded grain at the elevator with my hubby!  Hope you are all having a great week!

« Cleaning a Scorched Pan
A Neat Way to Organize Recipes »