A couple of days ago, we had a agriculture group from Taiwan come to our farm to learn more about U.S. agriculture and biotech (more about this in a later post.)  They planned to arrive mid-afternoon to our farm so I wanted to make them some kind of snack to eat while they were here.  After asking for some suggestions on Facebook, I decided to try making sweet corn ice cream.  Sweet corn and homemade ice cream were suggestions, so I decided to combine them!

This recipe is complied from some research I did about sweet corn ice cream. There are actually quite a few recipes out there and the comments sections are just as helpful as the actual recipes that I found. 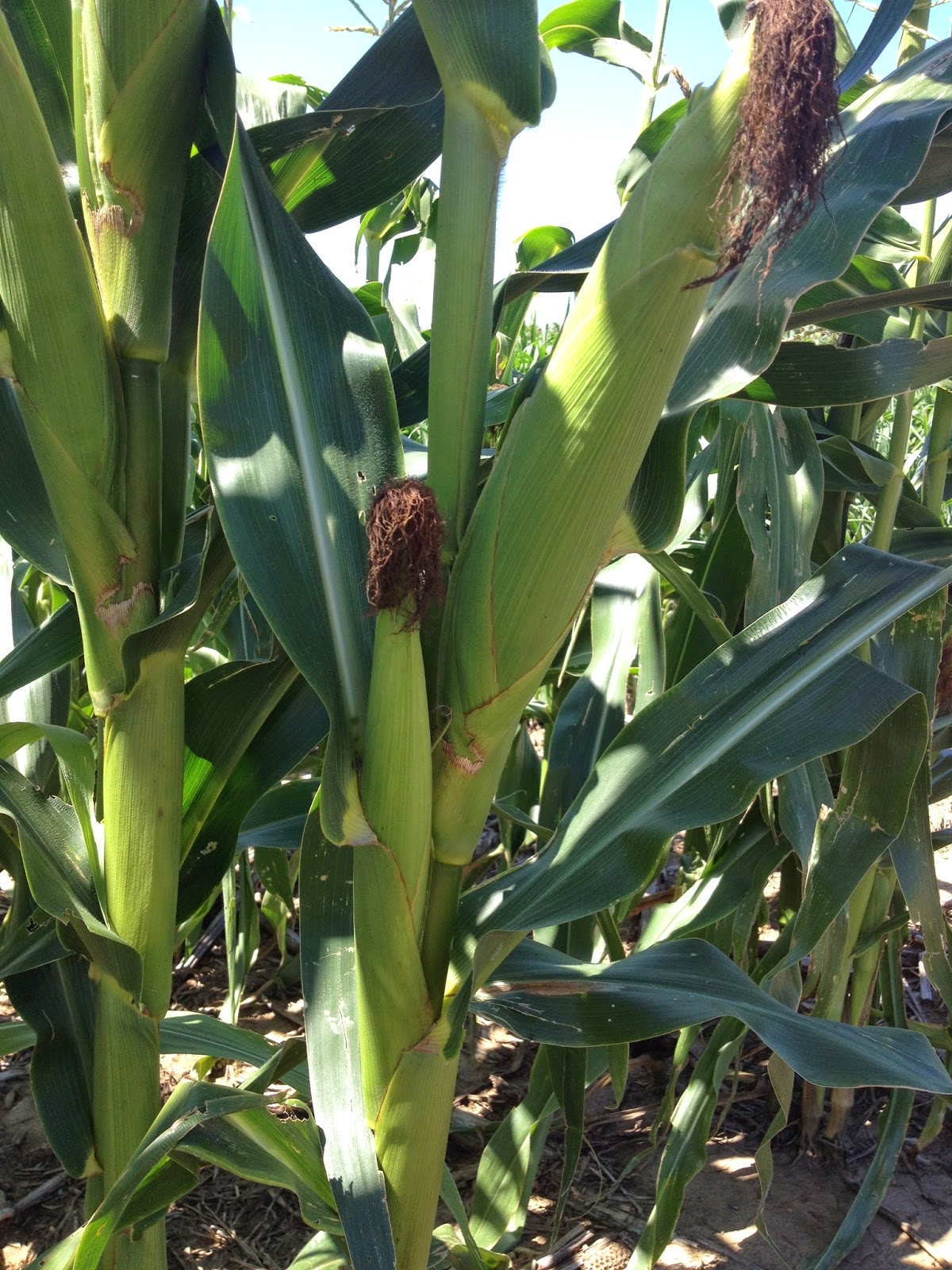 For starters I had to go pick some sweet corn.  Luckily our patch is just behind our house out in a field, so I had access to as much as I needed. 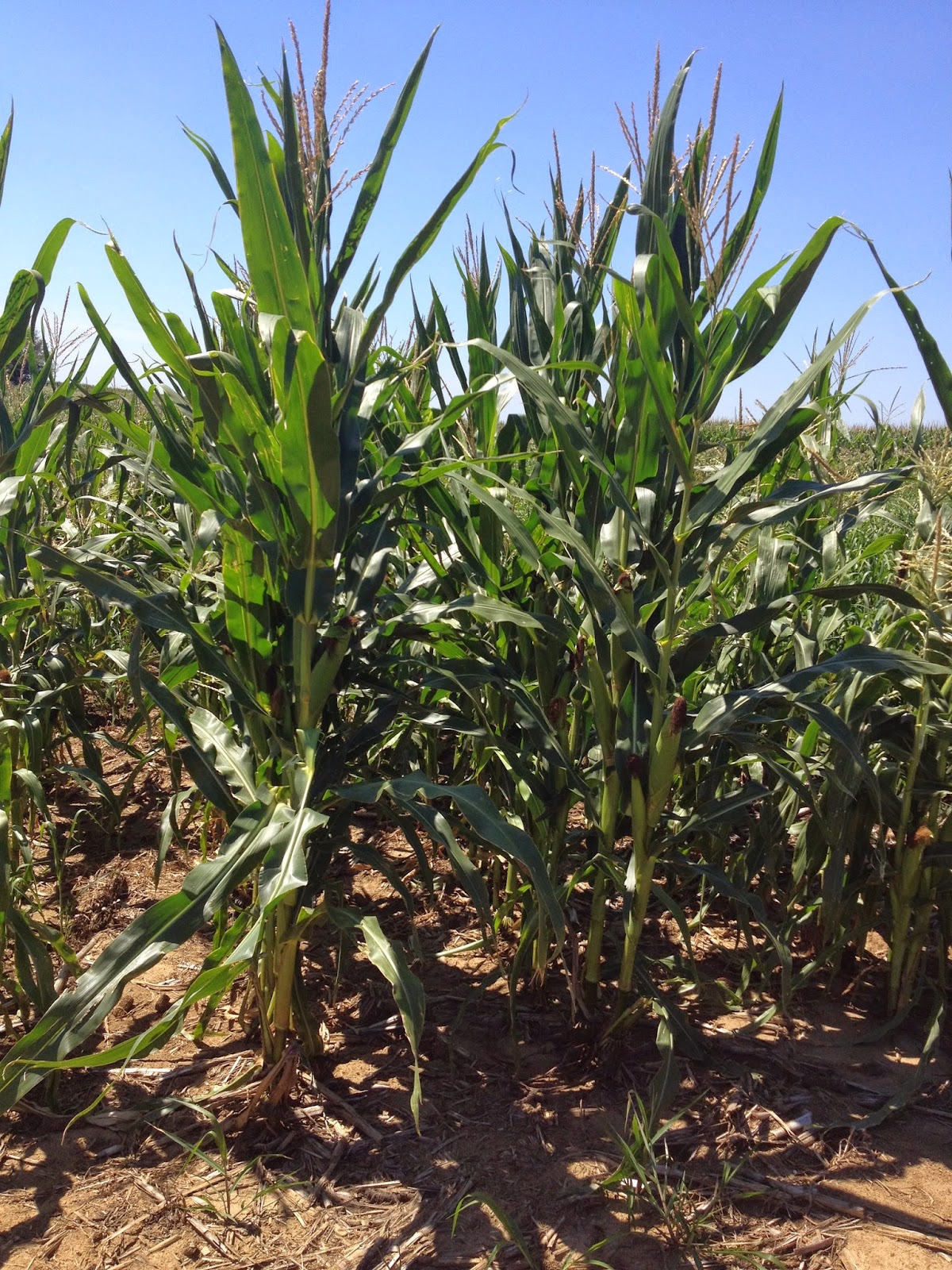 Then I enlisted the help of my four year old to help me husk the corn.  I had picked enough to eat for supper that night too.  (Notice the purple corn below.  That was a variety that we had planted in the garden this year.  Due to the storms, we only got about 10-12 ears of it and none of it was really purple like the picture showed on the seed package.  It tasted just like normal sweet corn even though it was a different color, but Hudson through it was pretty cool!)

Here are the directions to make this yummy ice cream!

Cut the kernels off of the corn cobs and place in a large pot.  Break the cobs in half and add them to the pot also.  Pour in the milk, cream, and 1 cup of sugar.  Stir well and bring to a boil. 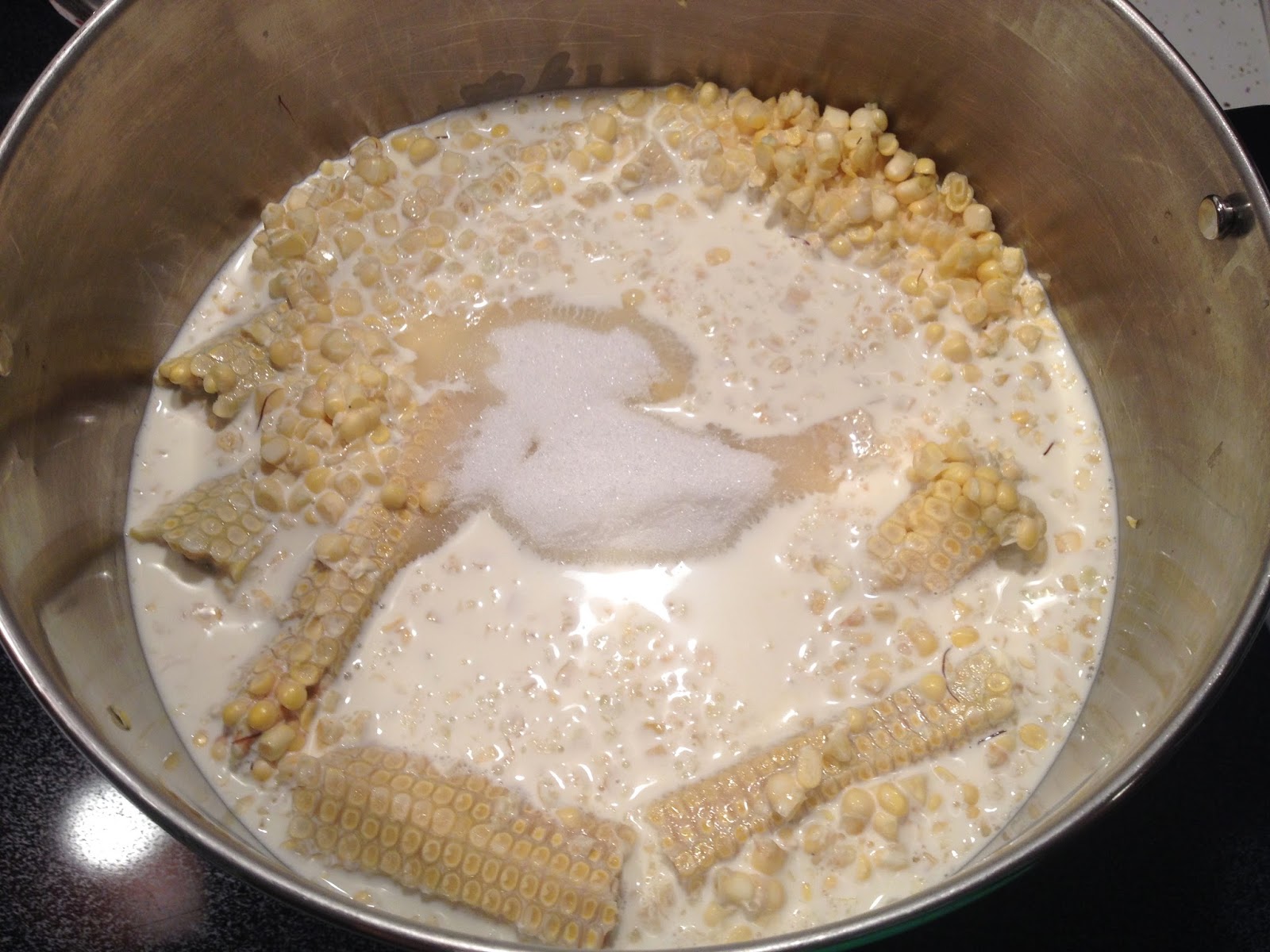 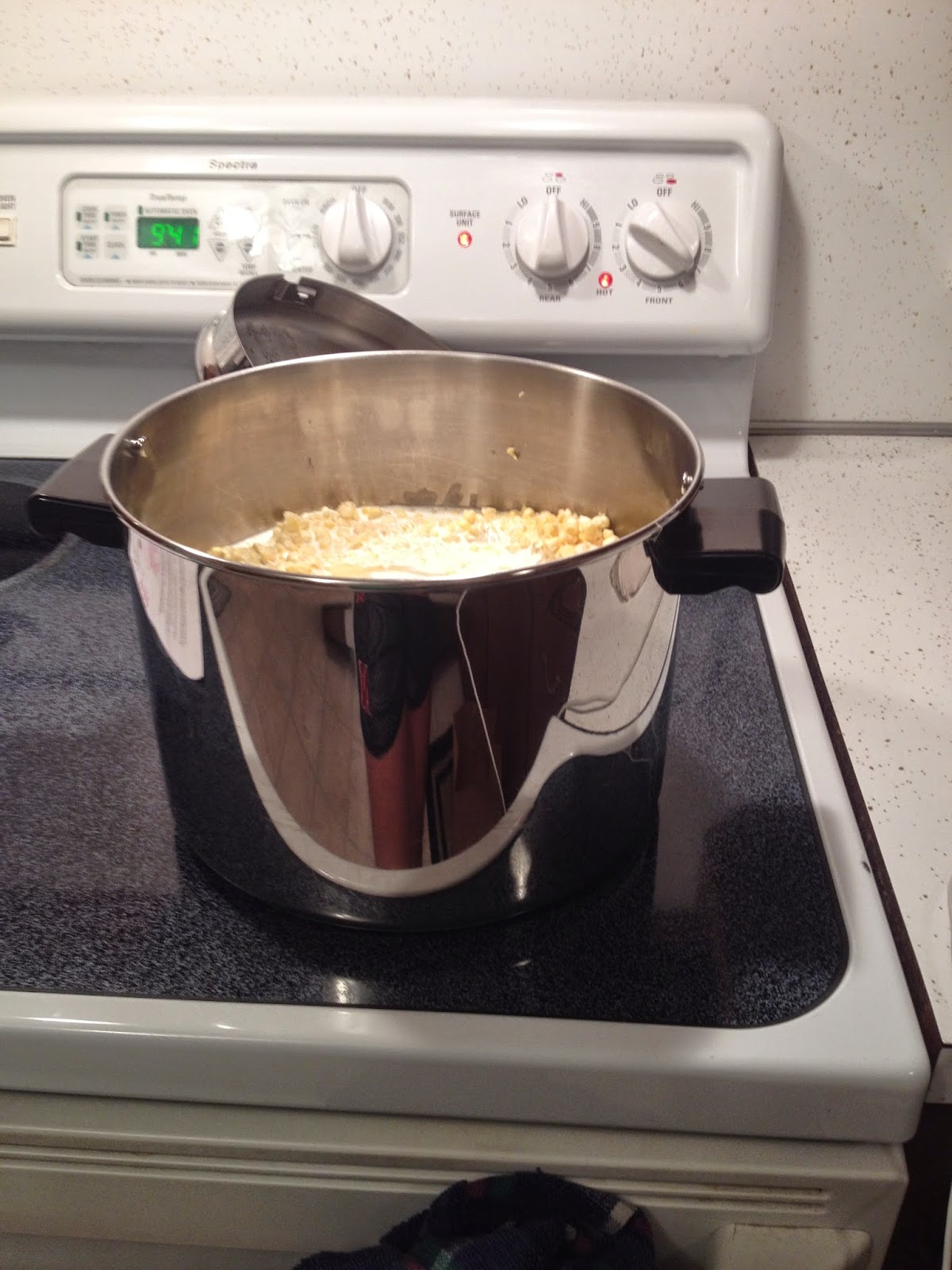 Turn off the heat and use an immersion mixer or blender to puree the corn kernels (not the cobs).  Let sit for about 2 hours.  You want it to stay pretty warm the whole time, so if you don’t have a really low setting on your stove like me, just turn the stove on for a few minutes to keep the mixture warm and then turn it back off every once in awhile. 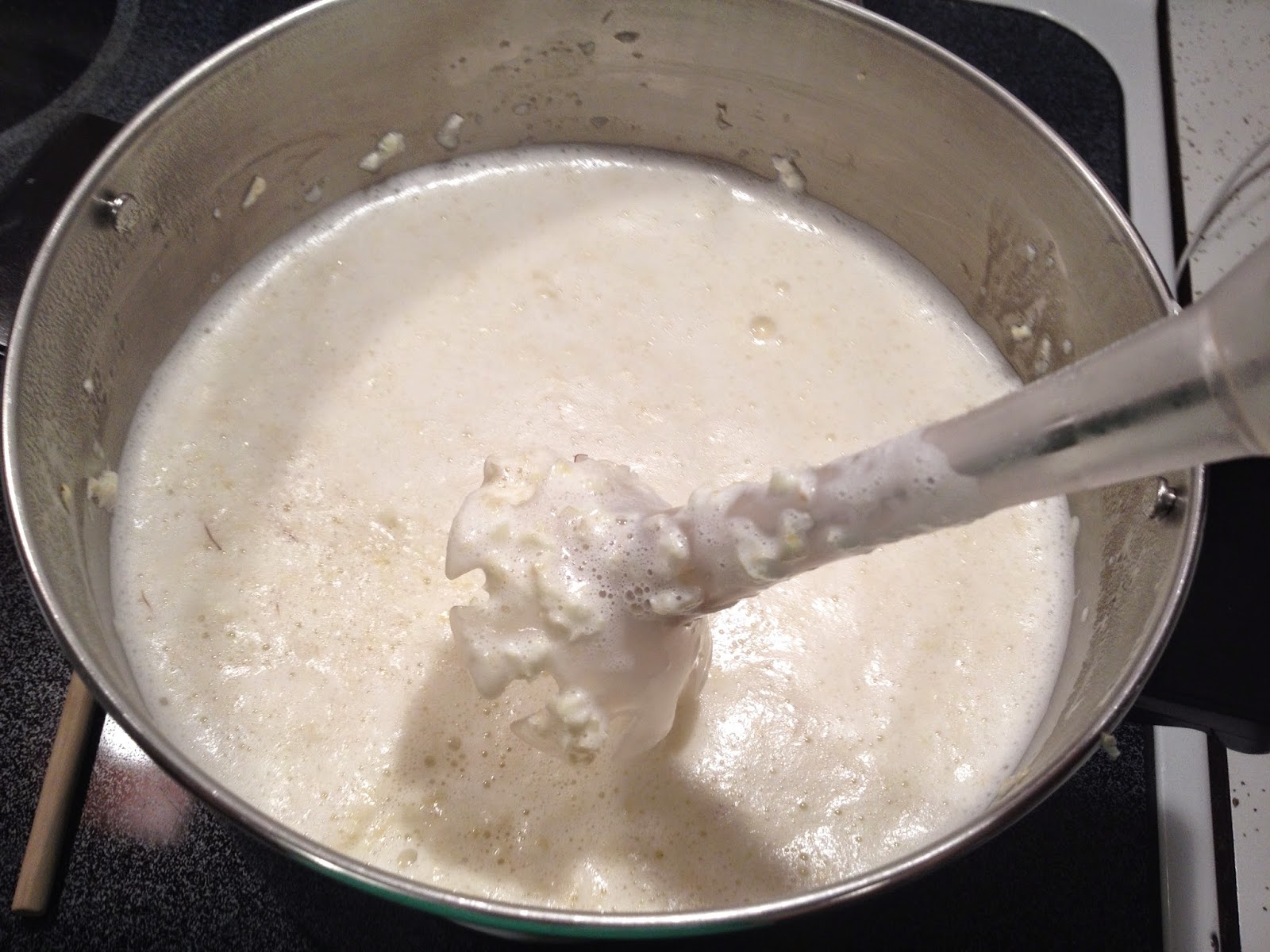 (Sorry there are no other pictures of the ice cream making process.  I started this around 10pm and finished with all the dishes around 1am.  I started to forget to take pictures at some point that night!)
After the 2 hours is up, bring the mixture back to a low boil.  Remove it from the heat. Remove the corn cobs from the cream mixture.  Whisk the egg yolks and 1/2 cup of sugar together.  Stir in a cup of the hot cream to temper the eggs.  Then slowly pour the egg mixture into the cream mixture.
Cook over medium-low heat until it thickens like a custard.  This should take about 10 minutes.
Next, you need to run the ice cream mixture though a fine sieve or strainer to remove all the pieces of corn.  Then chill the mixture for a least 4 hours or overnight.  Freeze in an ice cream maker according to the directions.
To make the blackberry sauce, in a large saucepan, bring the water and sugar to a boil.  Add the blackberries and cook for about 10 minutes or so or until the blackberries start breaking down.  Add the lemon juice and then use an immersion mixer or a blender to puree the blackberry sauce and then run it through a fine sieve or cheese cloth to get rid of the seeds.  Refrigerate the sauce until you are ready to serve it.
To serve, place the sweet corn ice cream in a bowl and top with some of the blackberry sauce.  Enjoy!
Update: I just wanted to let you know what the Taiwan group thought of my sweet corn ice cream.  They were very interested when they heard that there was sweet corn in it.  They all took a scoop to start with and then almost every single one of our visitors came back for seconds!  They told me that I should commercialize it and that they would buy a ton of corn and a container of ice cream!  That made me feel good!  So luckily, even though it was a brand new recipe that I tried (why do I do that with new people?!?!?) it was a hit!