Hello!  Seriously how can it be November already?  October flew by!  It’s going to be the end of the year before we know it.  Does anyone else feel that way???

October started off with a trip out to my parent’s house in Nebraska for a few days.  Axten got to check on the cows at the farm while we were out there.  That kid absolutely loves cows! 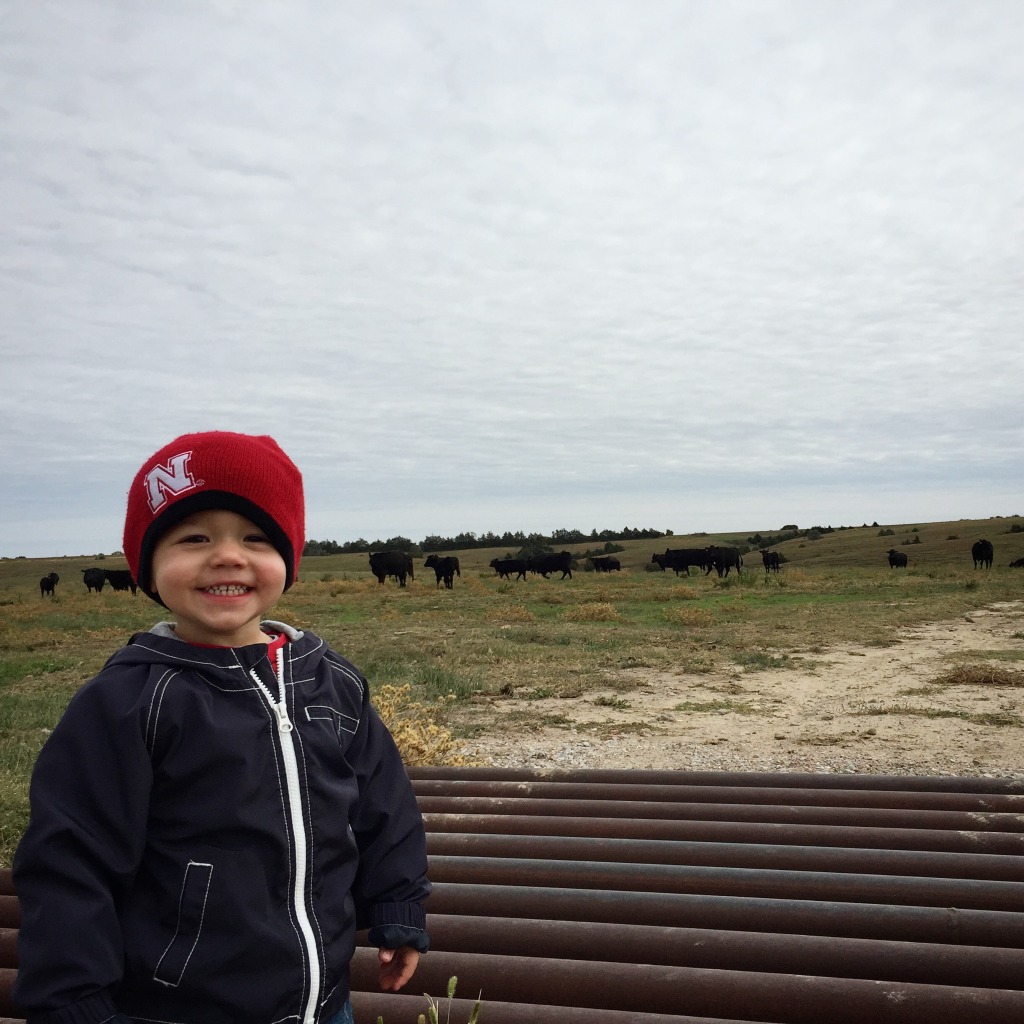 That weekend Hudson got to go to a Husker volleyball game with Grandma Sharri.  Not sure if he was more excited to see Lil’ Red or the cheerleaders.  He told his dad that he was going to wink at them.  Oh boy! 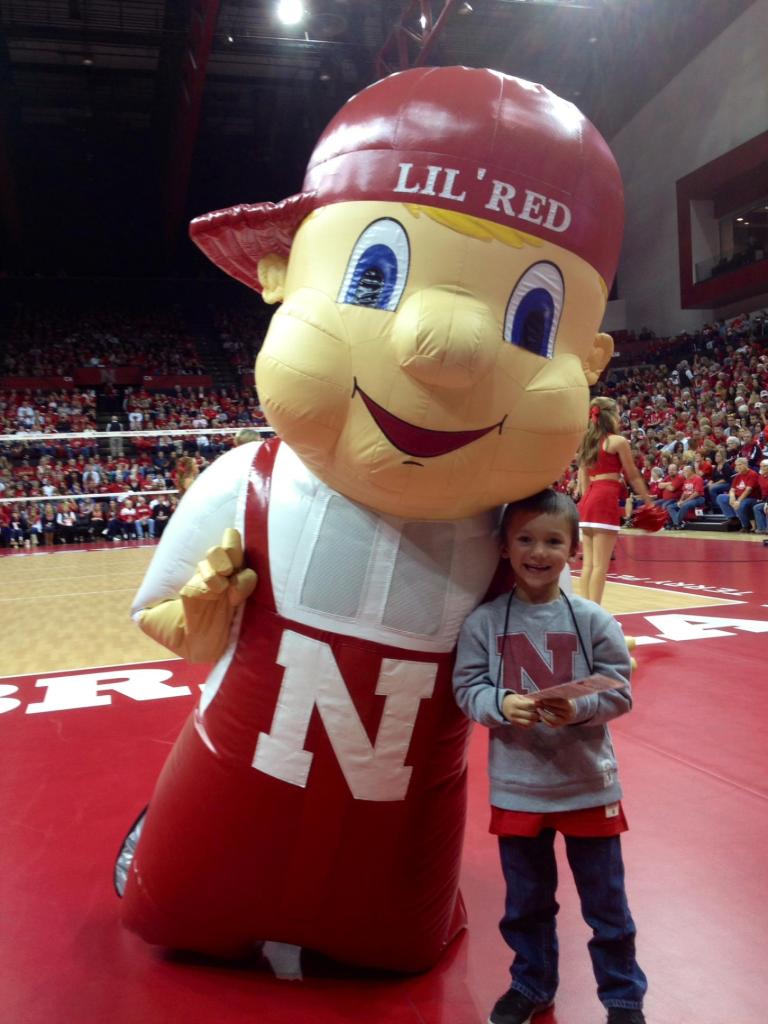 The beginning of that next week, we had the privilege of having U.S. Senator Stabenow from Michigan visit our farm while she was in the state of Iowa.  Kevin has had the change to meet her before, but this was my first time and she is quite the lady!  I wish we could have spent more time together, but she had to catch a flight home. 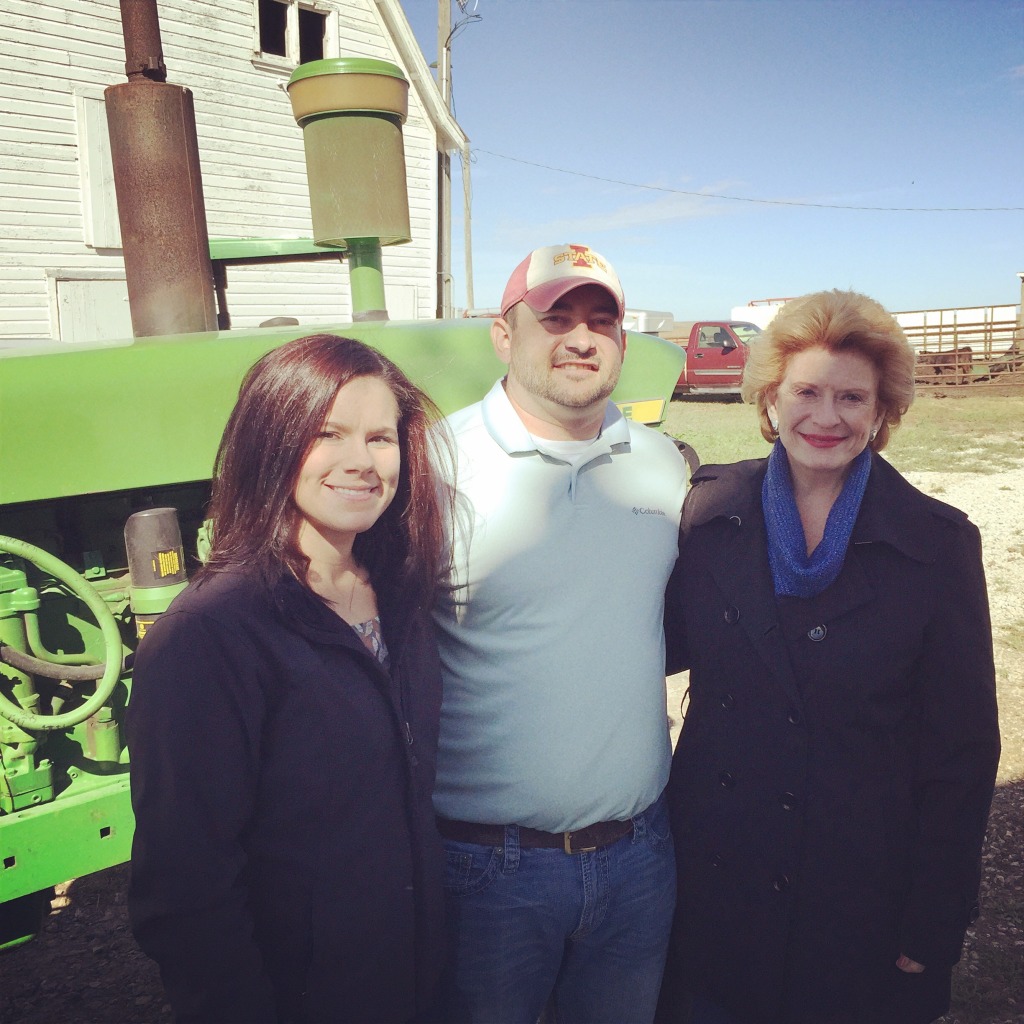 I love this picture that I took of Axten and Diesel heading out to go do chores.  Axten not only loves cows, he loves animals of all kinds. 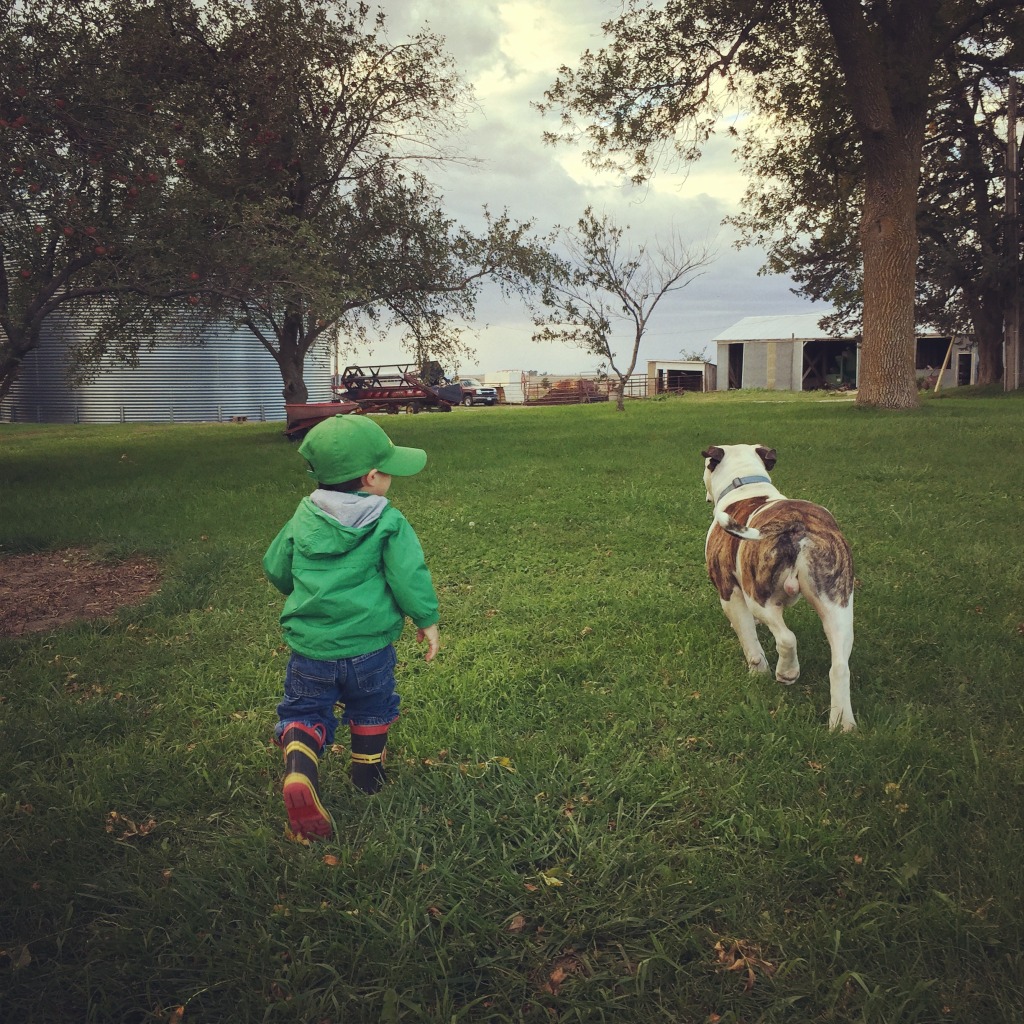 One evening at the beginning of October I went to Des Moines to have dinner with the ladies on the 2014 Iowa CornQuest Tour.  It’s always so much fun talking to food bloggers about our family farms and how we raise the food that they buy in the grocery stores.  Every year Iowa Corn brings in great bloggers that are wanting to learn more about their food and this year was no exception.  Here were the 10 ladies that I had the privilege of having dinner with:

Lisa & Anna at Garish with Lemon

Becky at The Vintage Mixer

Erin at The Law Student’s Wife

Julianne at Beyond Frosting

Lindsay at Life, Love and Sugar

Liz at The Lemon Bowl

Steph at Girl Versus Dough

Tanya at Lemons for Lulu 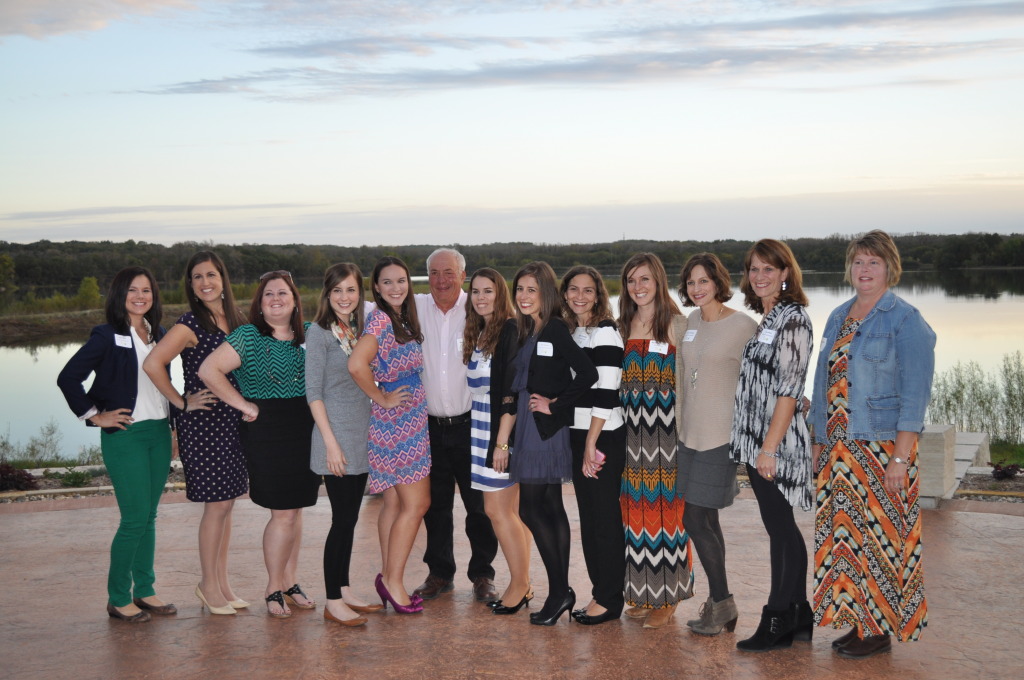 Finally on October 16th Hudson and Kevin headed out to start harvesting corn.  Hudson packed his sack of snacks and they headed out, only to find out that the corn was still too wet.  So it was back to waiting a little longer in hopes that the corn and beans would dry down a little more. 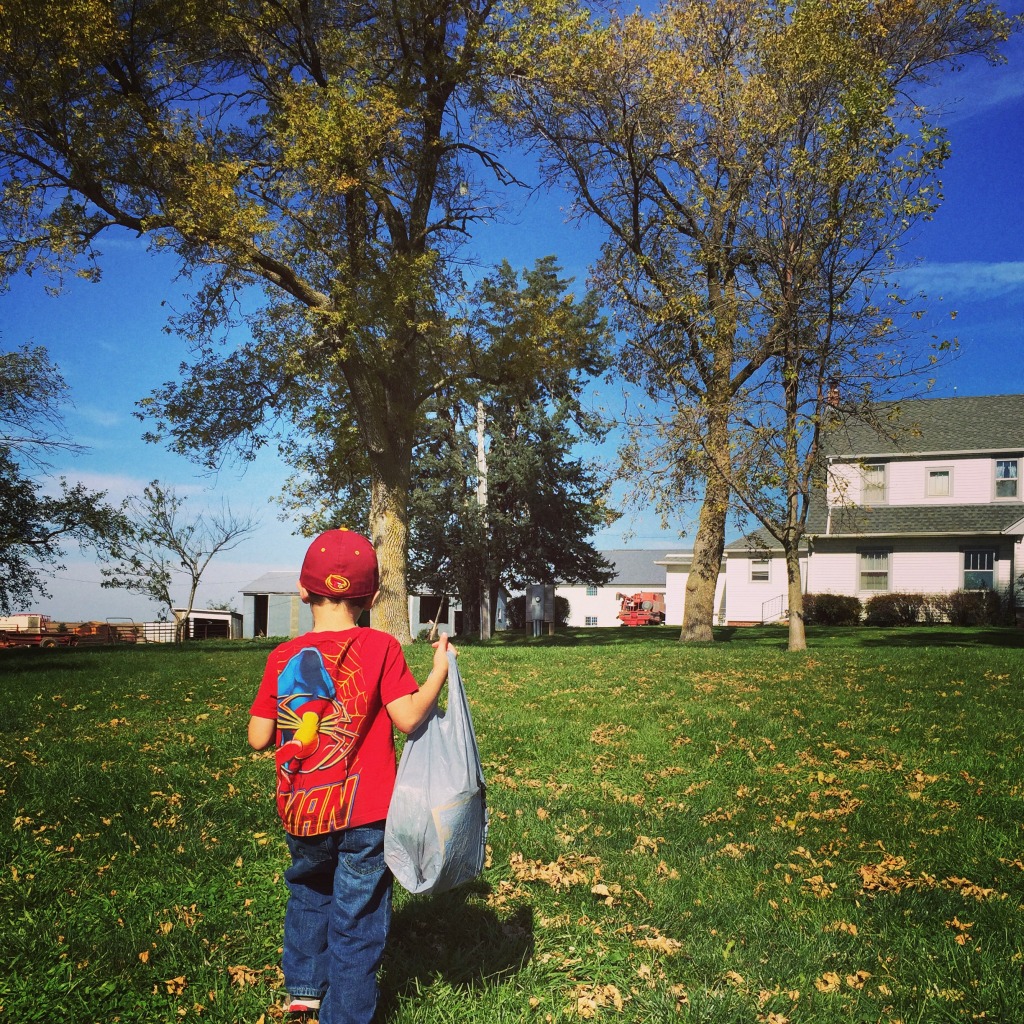 Meanwhile while Hudson was out harvesting with Kevin one afternoon, Ax and I went grocery shopping.  This kid can be so stubborn sometimes (all the time).  He insists on wearing his boots almost every day and he insisted on taking my old baseball glove into the grocery store.  Look how happy it made him! 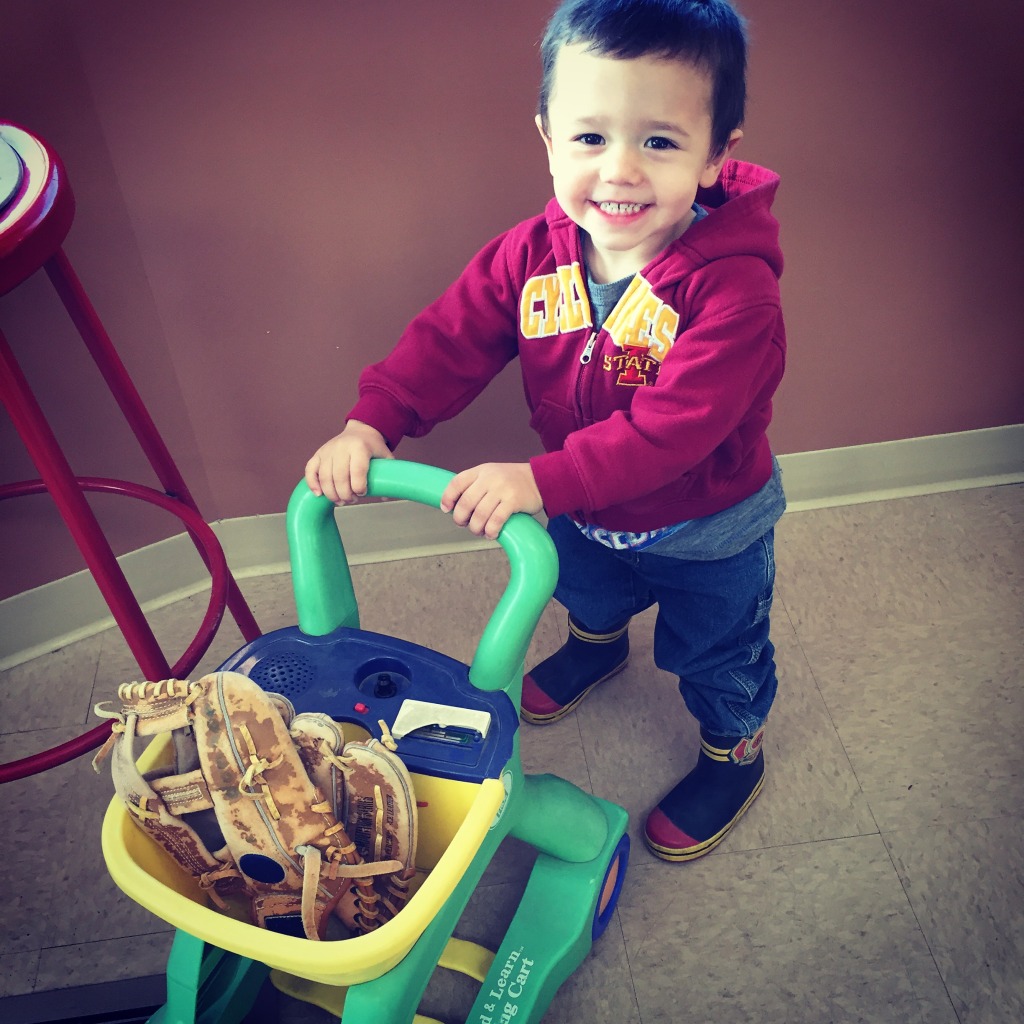 We also had some fun time outside this month playing in the leaves.  It’s been so nice lately, that we’ve been trying to soak up the last of the nice weather while we can! 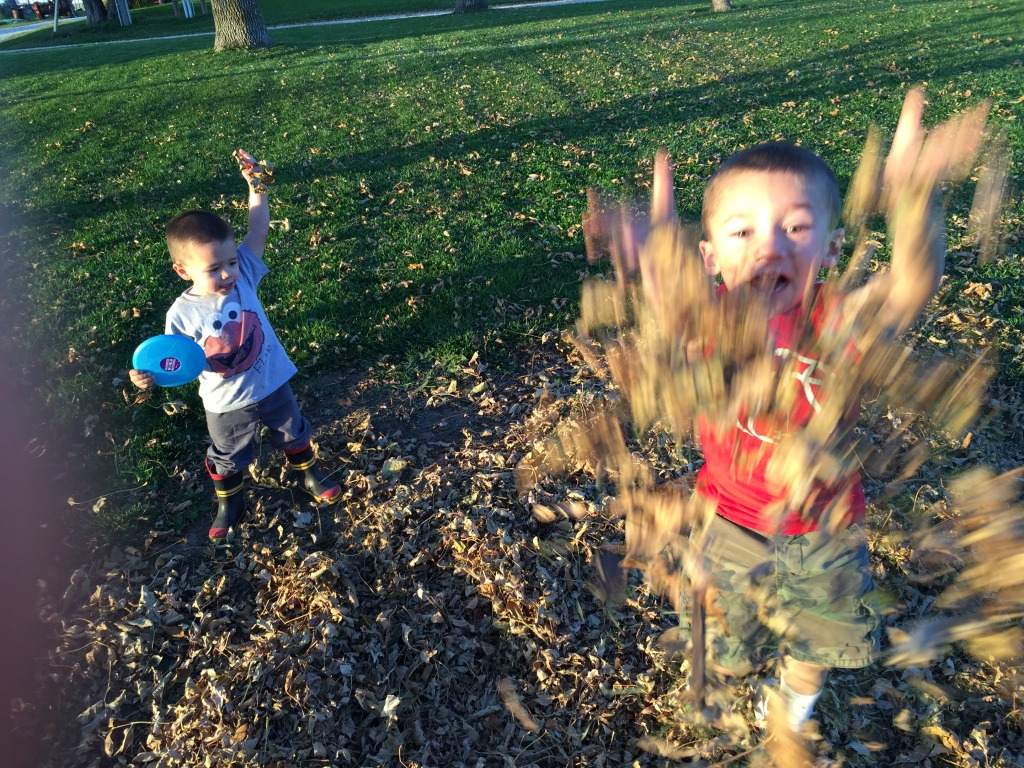 Since Hudson has gotten to go to a couple of Iowa State football games with Kevin this year, I thought I’d better get him to a Husker game too.  So we headed to Lincoln one weekend to cheer them on.  Again the weather was perfect that day and we had a great time! 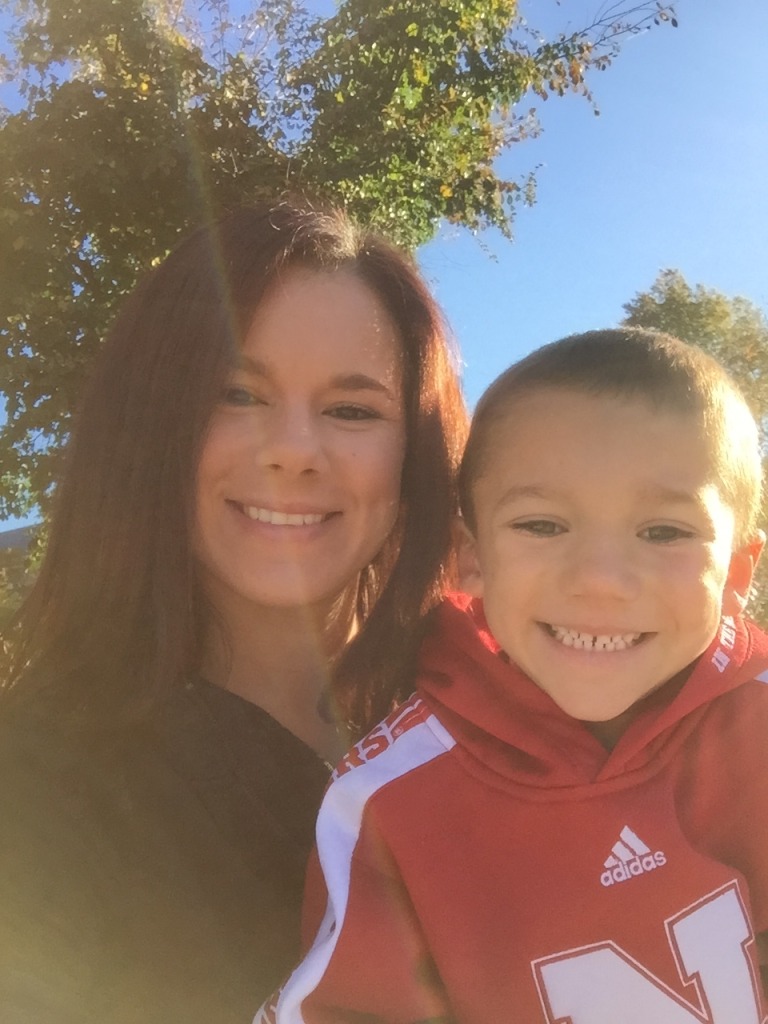 Ax was my photography assistant one afternoon while we went out to shoot the front cover of  The Home Agency’s November magazine.  I got a couple of him too while we were out in the soybean field all decked out in his John Deere green! 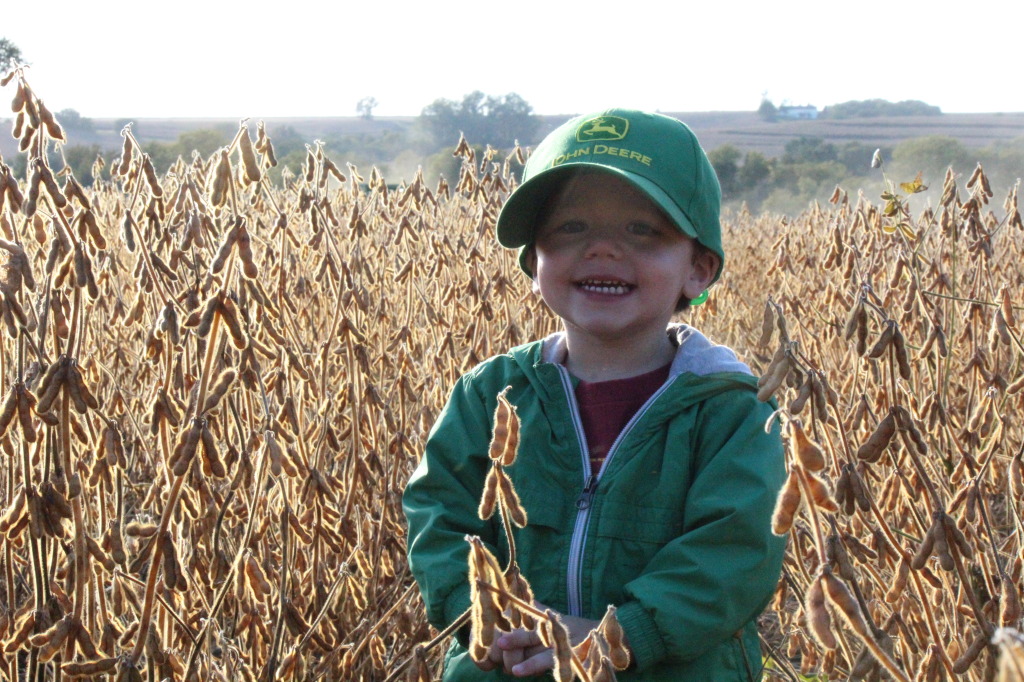 And here’s a picture of what constantly happens at our house.  Wrestling, wrestling, and more wrestling!  Then then a little football, basketball, soccer, and/or baseball sprinkled in.  Luckily all the balls that are inside are made out of foam, so nothing has been broken yet.  (Knock on wood!)  These two are really into their sports!  Axten’s favorite work right now is “TOUCHDOWN!”. 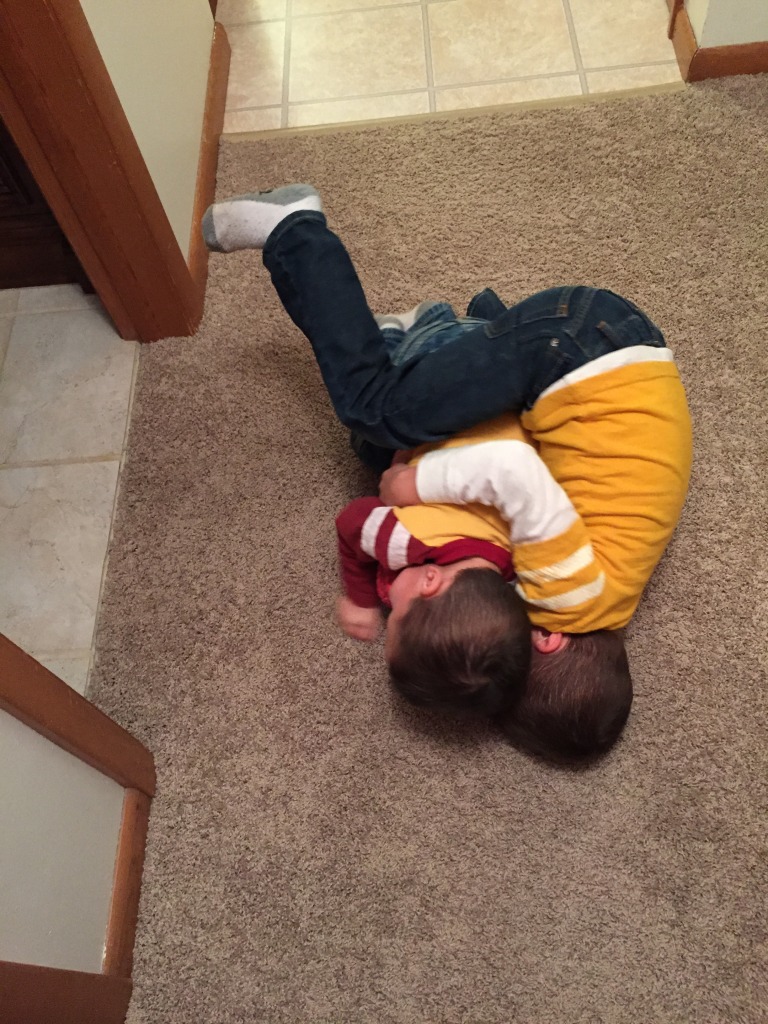 This picture just makes me laugh out loud.  I often have Hudson go out to the mailbox when we get home and bring in the mail.  Well, he started dropping it along the way this day and Axten helped him get it to the front stoop.  Then they had issues picking up all the newspapers.  At one point they both had some in the mouths, under their arms and in their hands, but still couldn’t manage to pick it all up and get it inside.  So mommy had to step in and help out.  Geez!  Who knew it was so hard to get the mail!  🙂 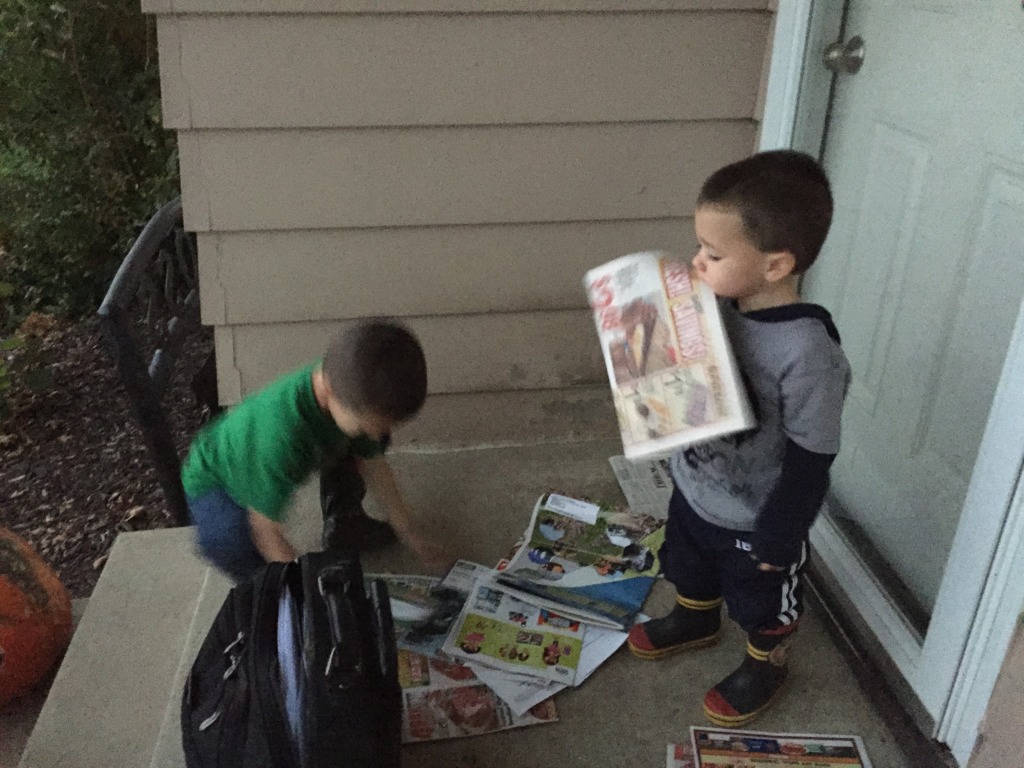 Last Thursday was Hudson’s Fall Party at school.  We were asked to bring a treat, so we picked out these little mandarin orange cups and thanks to some inspiration from Pinterest, we drew on some Jack o’ Lantern faces.  Hudson was in charge of the outlines of the eyes, nose and mouth and then I filled them in.  Simple and easy! 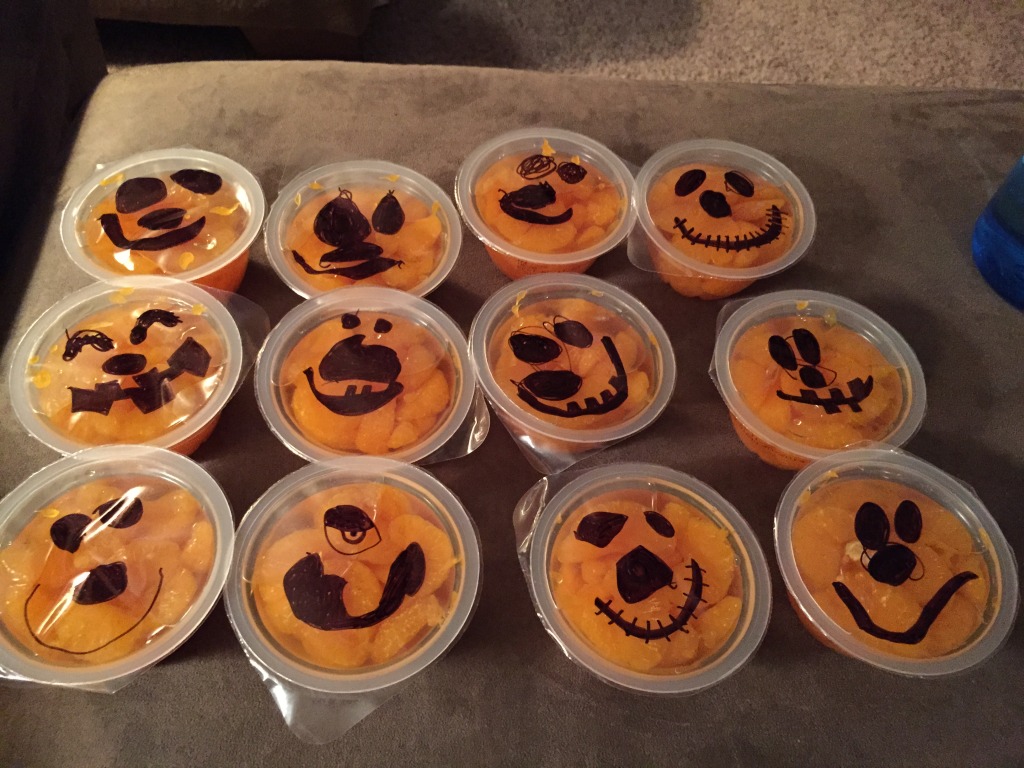 Parents were invited to attend the Fall Party too.  I loved going and watching HD in his classroom with all his little friends.  He seemed so grown-up!  Then that night we had our first Parent Teacher Conferences and let’s just say that we are really proud parents!  He’s loving this school thing! 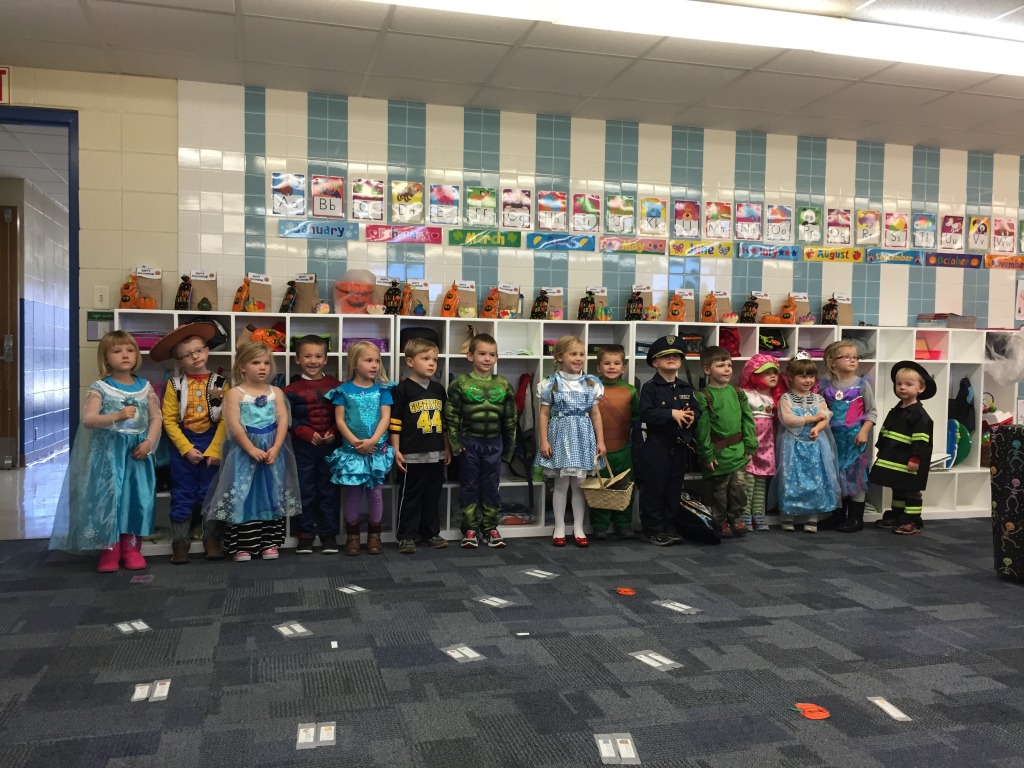 Finally we reach the end of October (and I left a TON of photos out!)!  Since we live in the country we have to drive to a neighboring town if we want to go door-to-door trick-or-treating, but often times we don’t make it that long.  We have about five or six places that we stop at that by the time we get in and out of the car and chat for a bit, it’s getting kind of late.  But the boys definitely don’t lack for candy!  Those six stops spoil them rotten!  This year Hudson wanted to be Spiderman.  I figured it would be easier to just borrow his buddy, Q’s, costume from last year than trying to make one like we (my mom) have in the past (2013, 2012, 2011).  He also decided to have Axten by Captain America.  I found this costume on Amazon for only $9.99!  This is the best picture that I got of the two of them.  We finally had to walk back by the bulls so Ax would (somewhat) cooperate.  He’s usually great about pictures, but he woke up on the wrong side of the bed from his nap that day.  He cheered right up when he started getting candy though!

Well, that’s my October in a quick nutshell!  Anything exciting happen to you?  Here’s to the last two months of the year!!!