I had good intentions of posting my November weekly recap all week, but I just seemed to run our of hours in the day.  So here it is…finally!  It was a busy month again, but we were all home for most of it so that was nice! 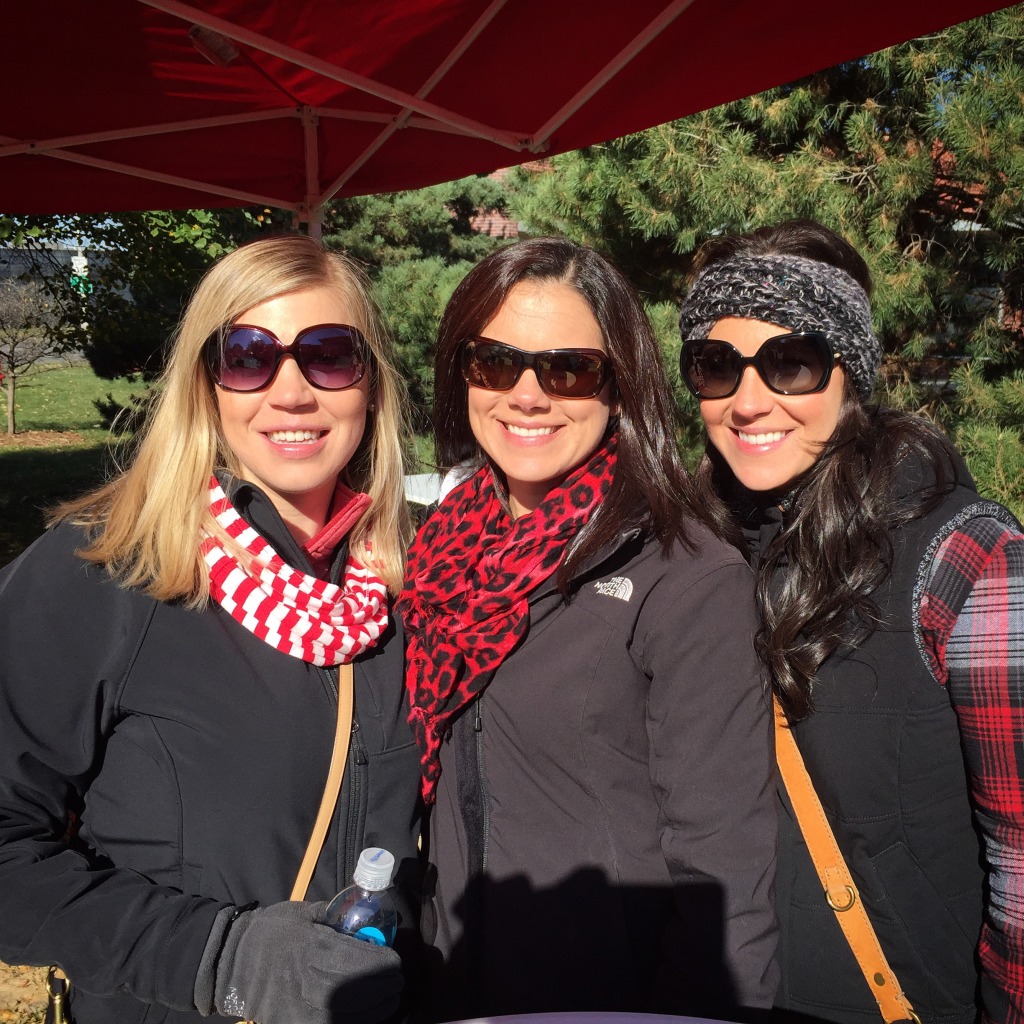 My cousin Angela and sister Megan

I started off the month by going to the Nebraska vs Purdue football game with my family in Lincoln.  I got to hang out with my cousin Angela who I hadn’t seen in quite a while and my sister Megan.  It was a nice day and we had a great time catching up! 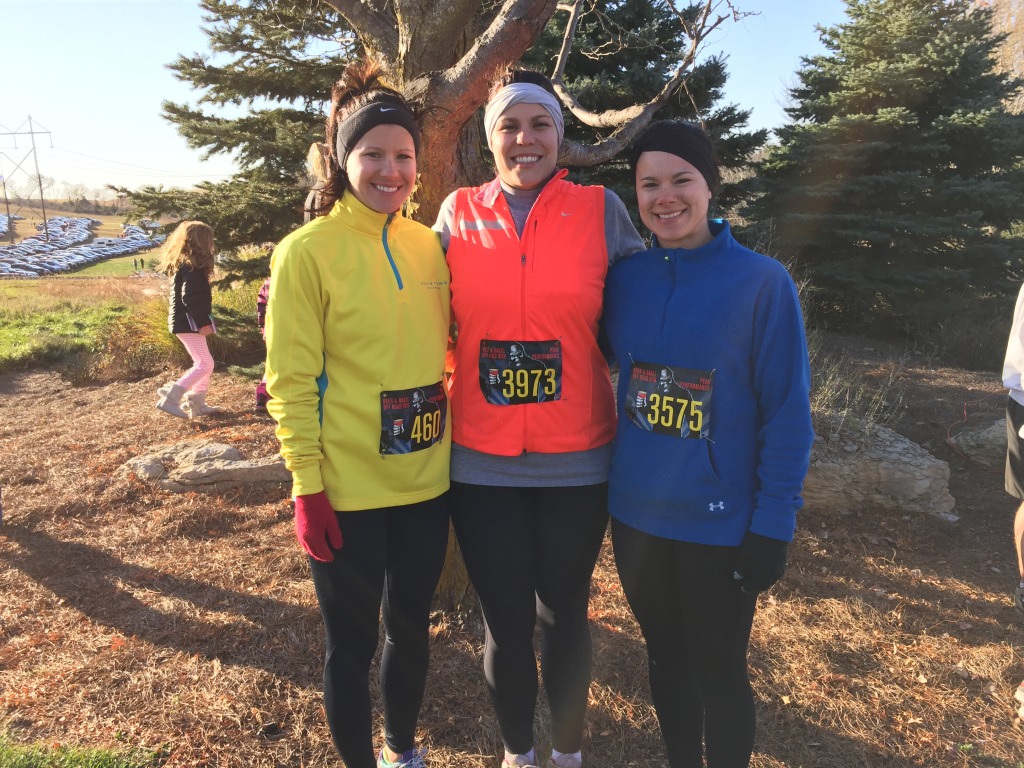 Megan, Morgan, and me (we did not coordinate our colors!)

Then the next morning my sisters, Megan’s boyfriend Andrew, and I ran the Beer & Bagel Off-Road Race in Ashland.  It ended up being about 4.5 miles or so and was quite the race.  It was pretty chilly and windy that morning, but the sun was out so that helped!  Once we took off we got into some trees so we couldn’t feel the wind as much.  It was very hilly, although it always seemed like we were going uphill!  I heard someone say, “we have to go down at some point right?”  After the race was over we decided that it really wasn’t that bad (considering none of us had been running that much) and couldn’t wait to do it again next year! 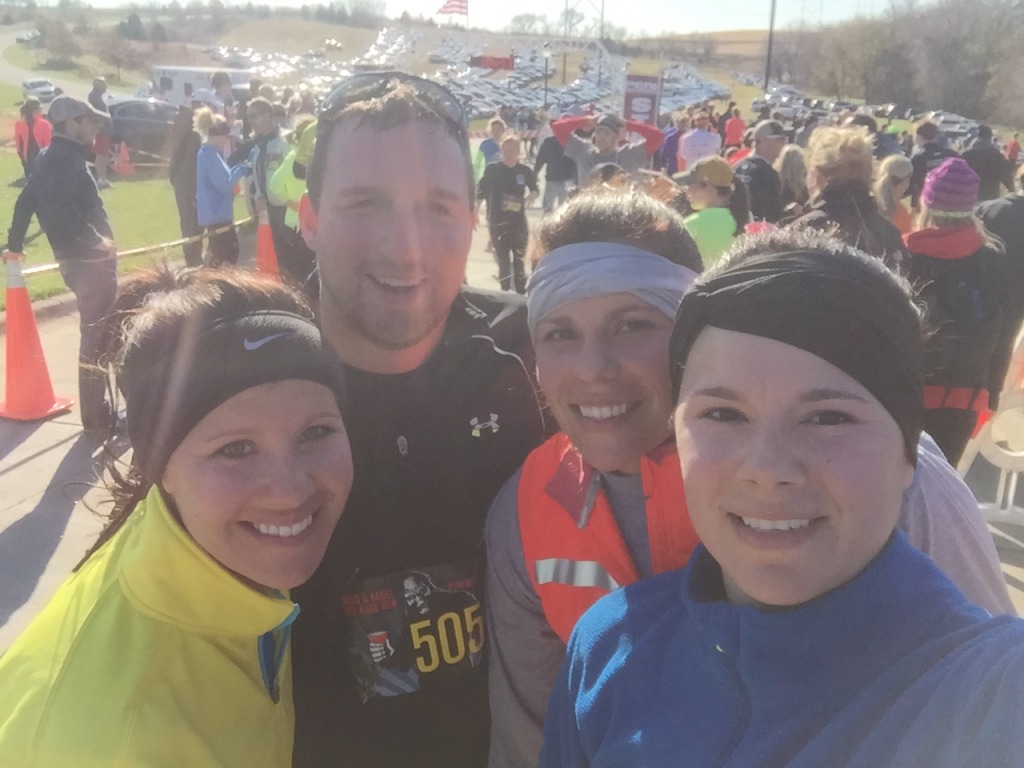 Megan, Andrew, Morgan, and me

Next up for the month of November was Election Day!  Every election I find is more and more interesting to me.  I think it’s because I learn more about the candidates each time.  I took Axten with me to vote after we dropped HD off at school.  Of course he had to get a  sticker too after he put my ballot into the machine! 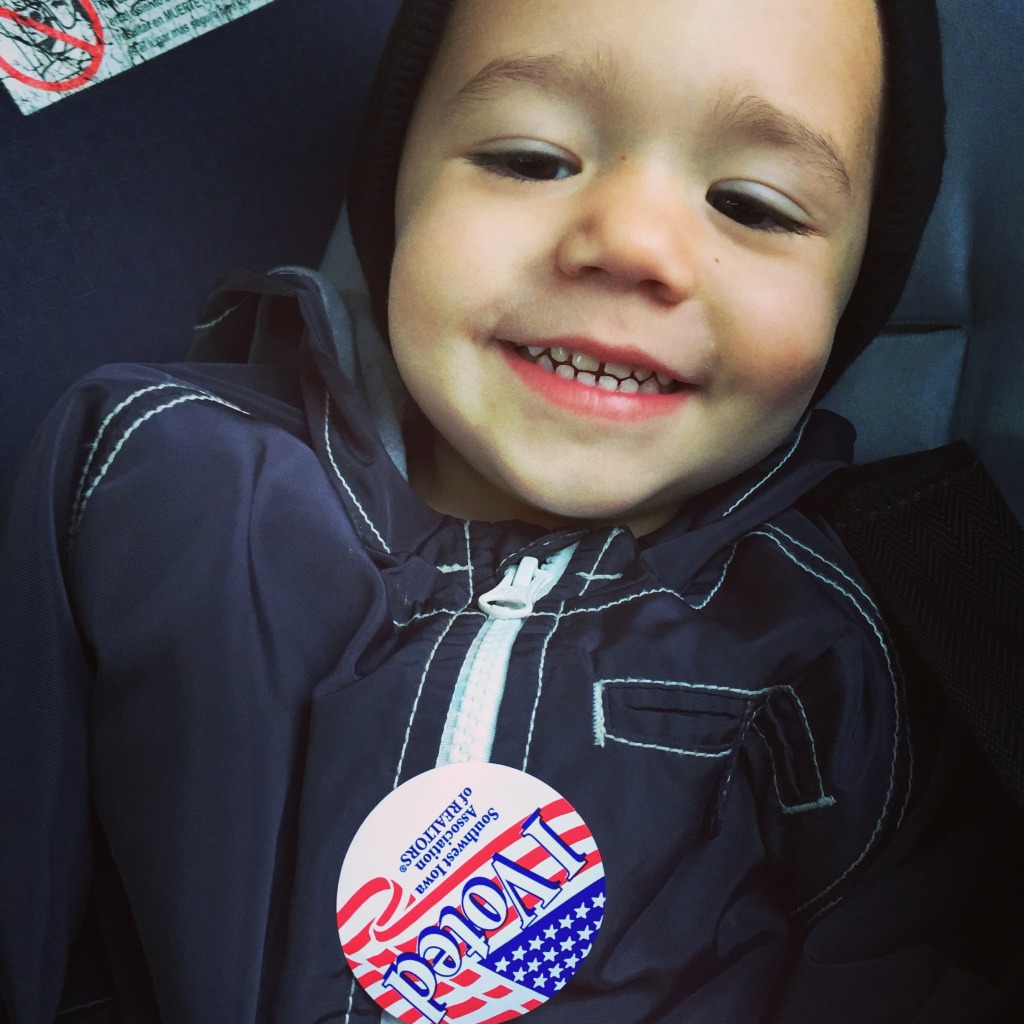 One major milestone that happened this month and happened way to quickly in my opinion, but doesn’t surprise me one bit, is that Axten figured out how to crawl out of his crib.  He will not stay in it any more.  Ugh!  Hudson never once crawled out and slept in it until we moved him to his toddler bed when he was about 2.5 years old, which was right before Axten was born. 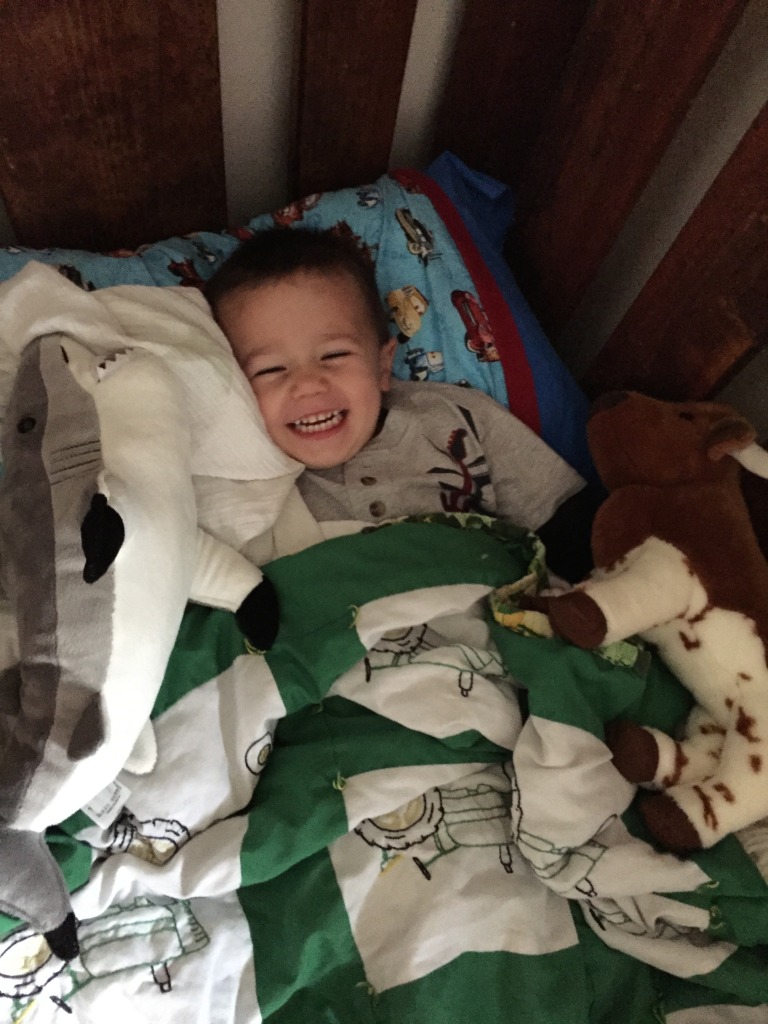 I was hoping to get a few more months use out of the crib, but this is what we are doing for the time being.  He likes to sleep near Hudson, so Kevin just put his mattress on the floor next to his bed.  I’m hoping Santa will bring them a big mattress so we can convert the crib into a full size bed.

Next up was the first snow the middle of November.  Of course we were not done with harvest yet, but it didn’t slow us down much. 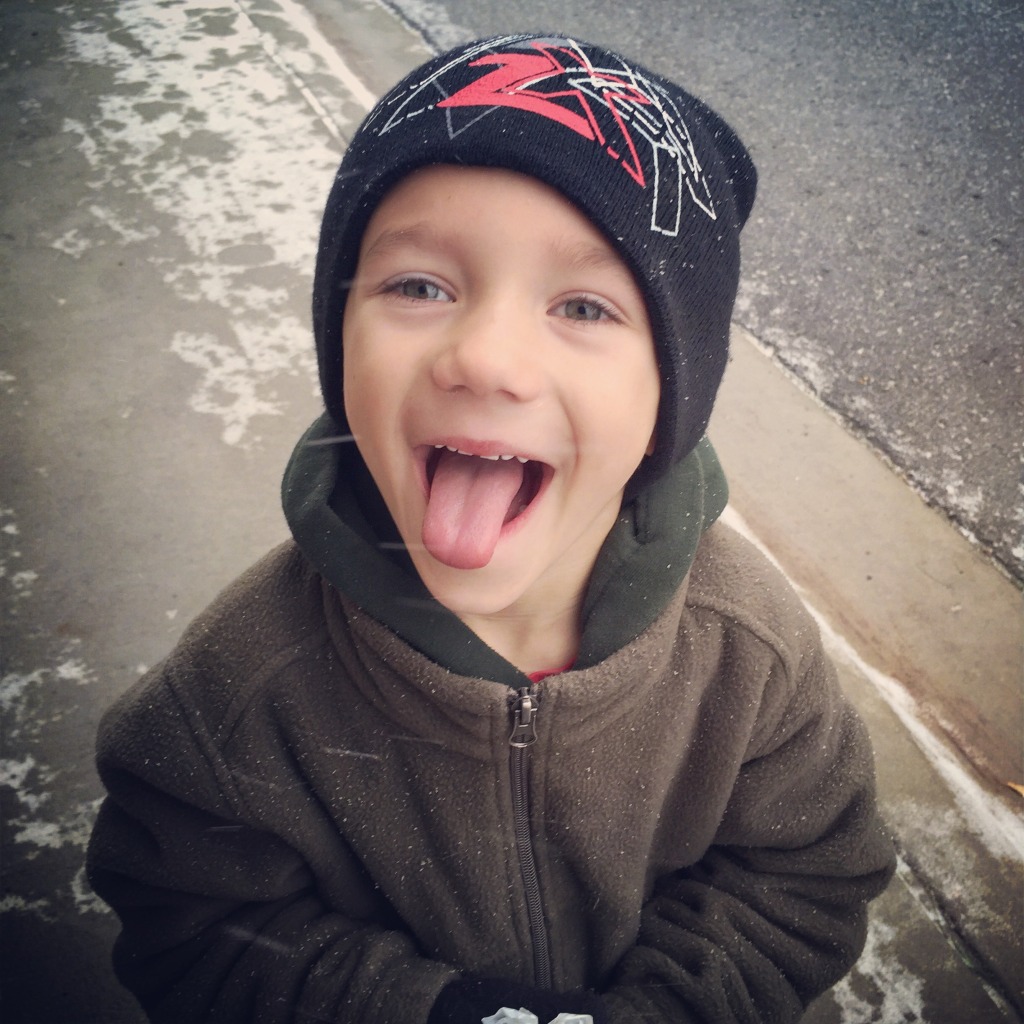 Then on November 19th, our little man (Axten) turned two!  Although if you ask him he’ll say that he’s five. 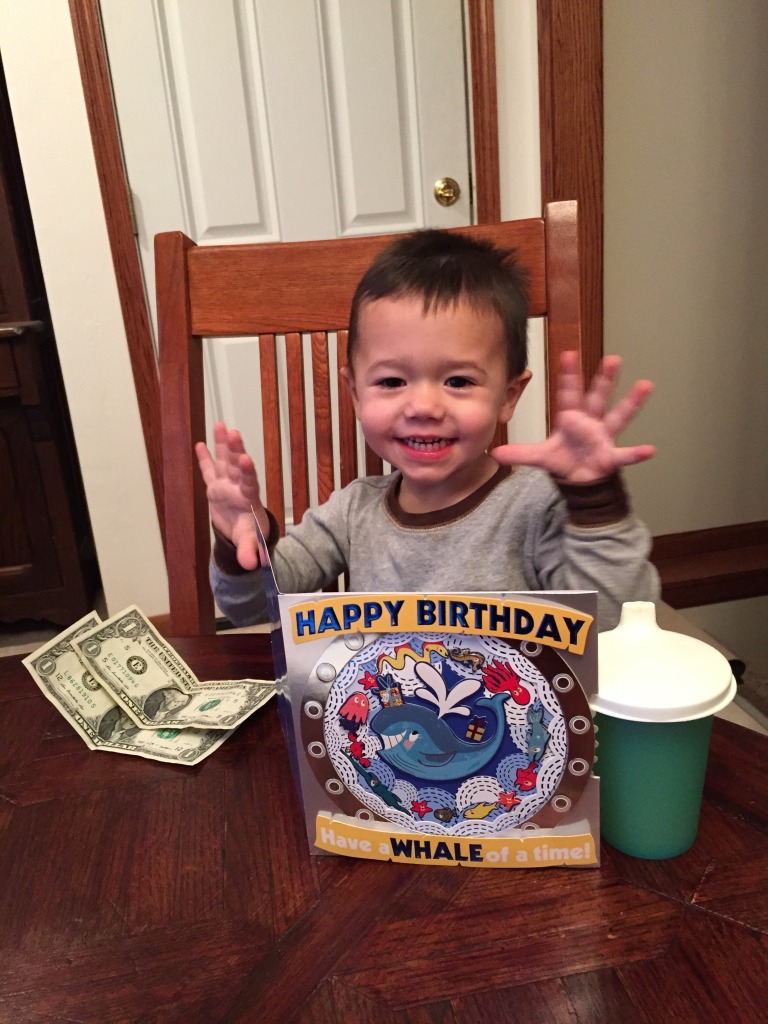 Not sure what they are doing in this picture, but I thought it was cute! 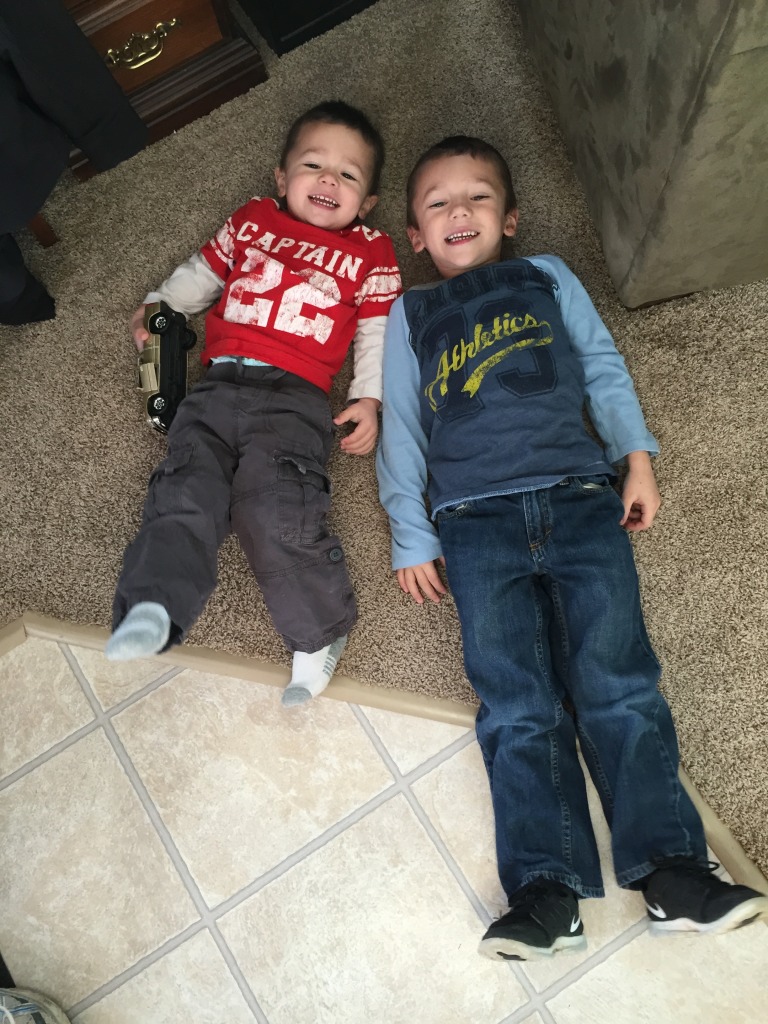 Then we finally got to Thanksgiving and family get-togethers.  We celebrated Thanksgiving at Kevin’s parent’s house just down the road from us and the boys had a great time with their four cousins.  This was the only two minutes that all six of them were sitting quietly all at the same time.  There must have been something really interesting on the TV right before we ate! 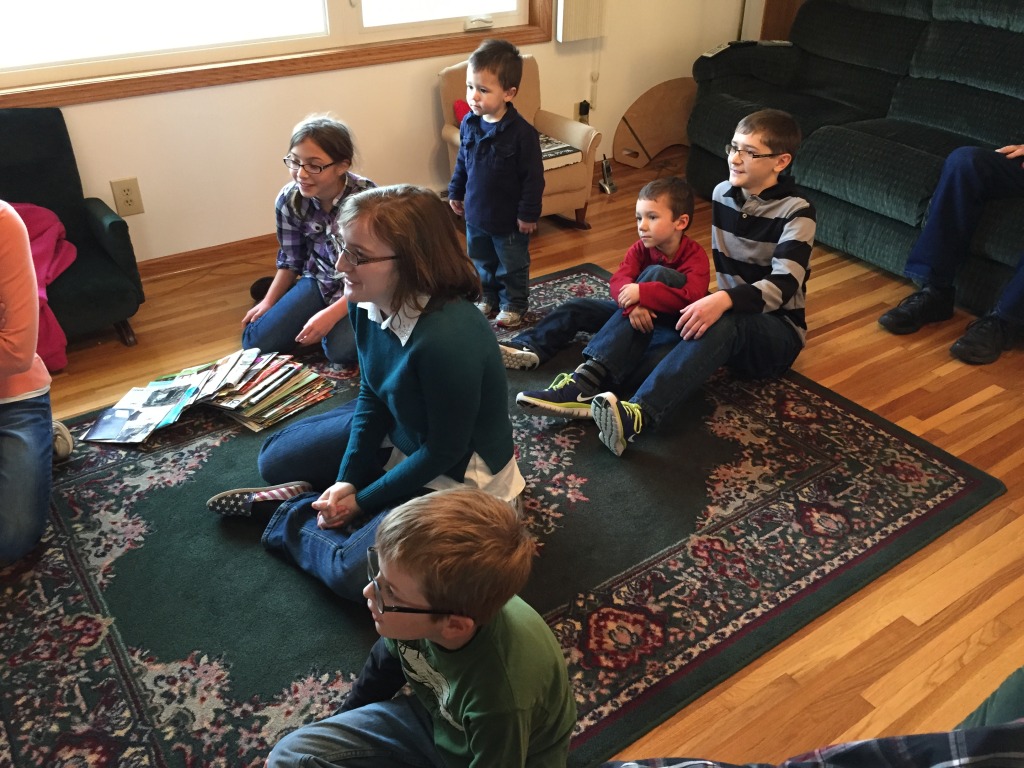 Then the next day we headed west to my parent’s house to celebrate Thanksgiving there.  As you can see the boys were looking through a few magazines trying to create their Christmas wish list (yeah right!) on the ride out there. 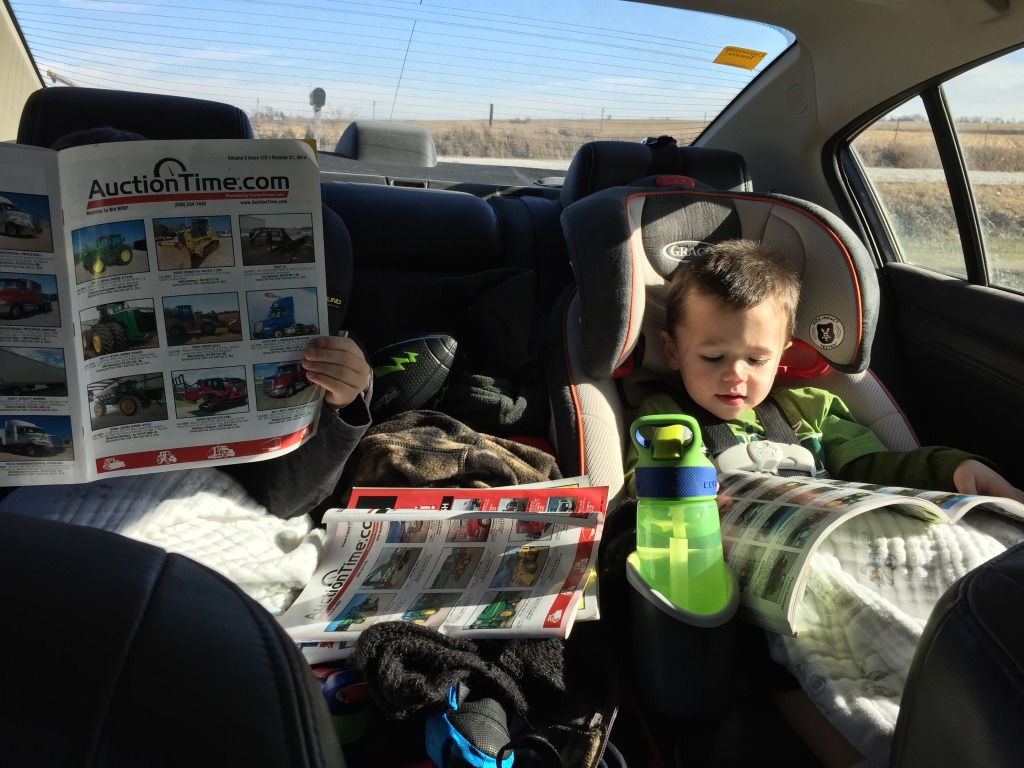 While we were out there we took some family pictures (will share those soon!) and I was able to get this one of the boys.  Ax isn’t looking at me but at least they are both standing there nice and smiling!  Can’t be two picky! 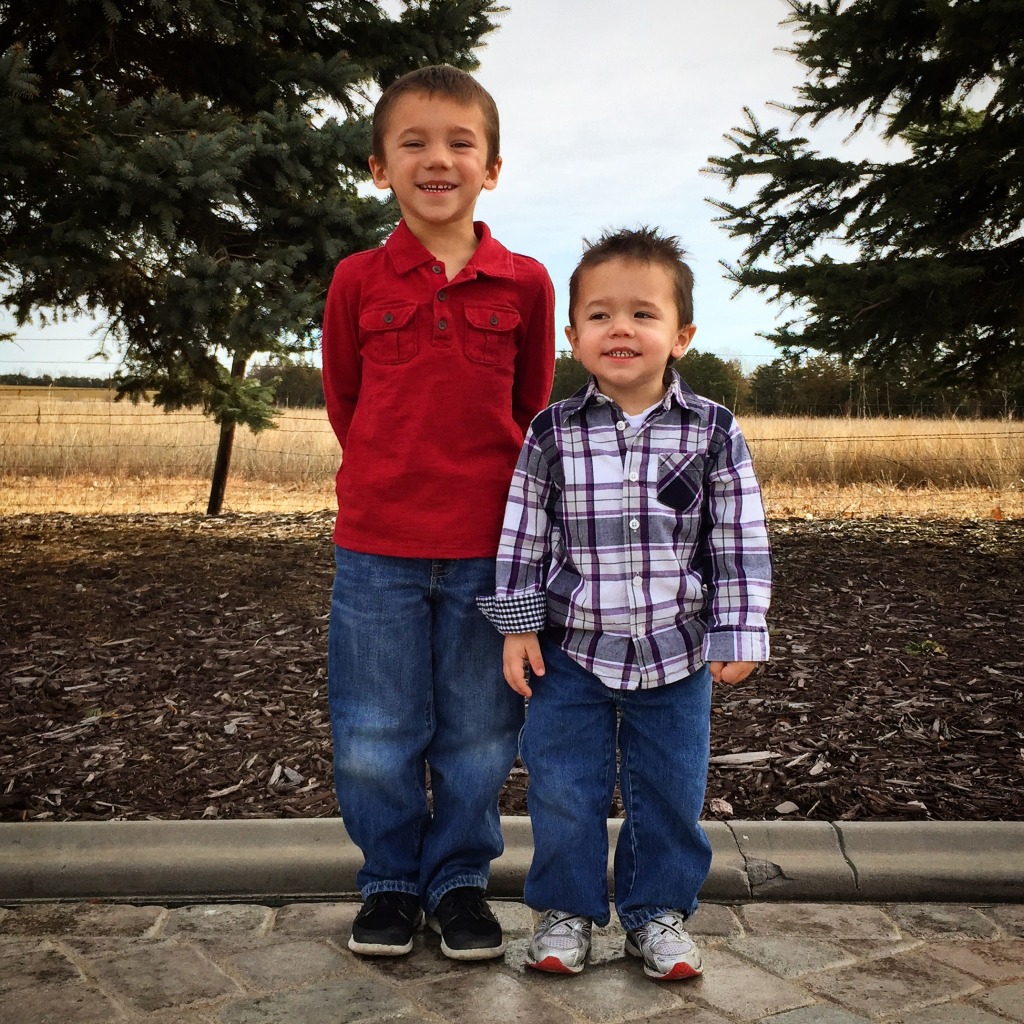 Then we had another amazing feast.  I volunteered Kevin to carve the turkey and he did an excellent job!  Both of our Thanksgivings were great, we got to spend some downtime with our families and eat amazing food! 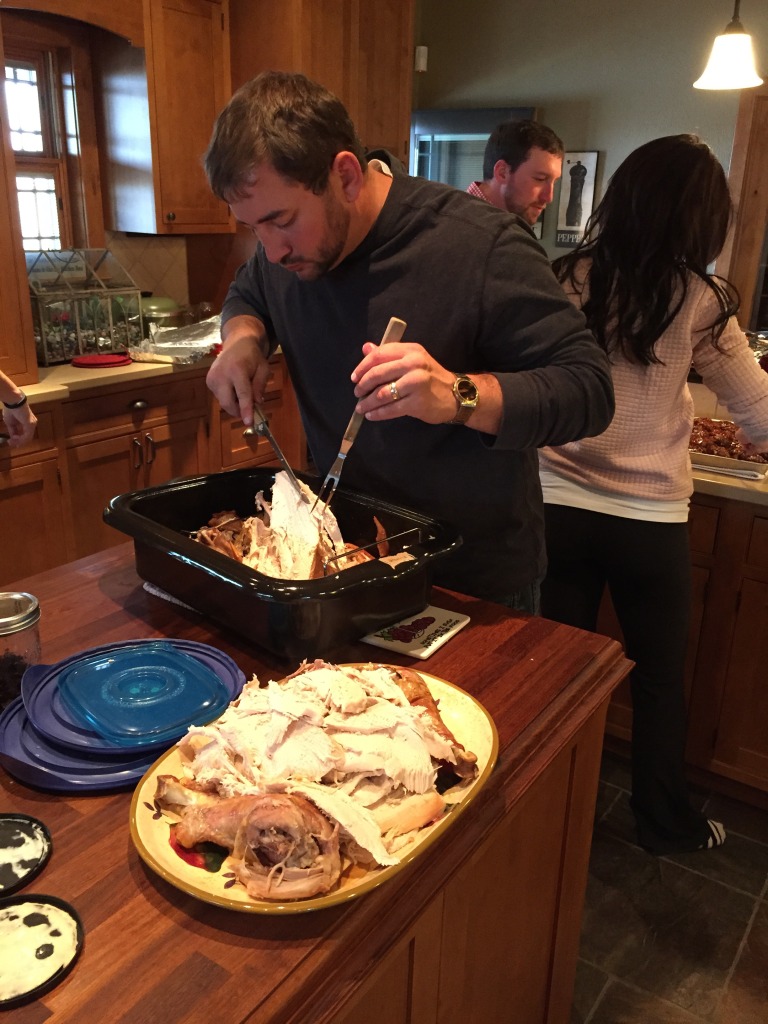 At both family gatherings we played some cards, we even broke out the Yahtzee at my parent’s house! 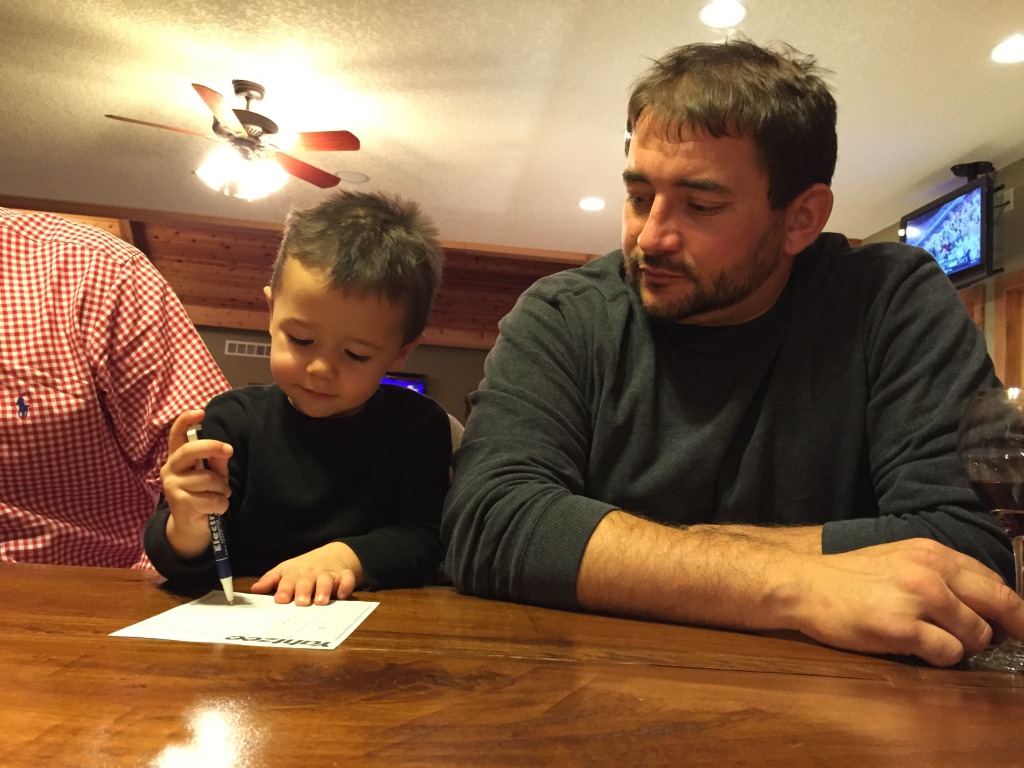 Then on November 30th we headed over to Sorenson Nursery near Avoca, IA to find our Christmas tree.  We’ve done this for four years now and it was a cold one this year!  The sun was out, but it felt like 0 degrees I think!  Brrrr!  Needless to say it didn’t take any of us long to pick out our trees this year! 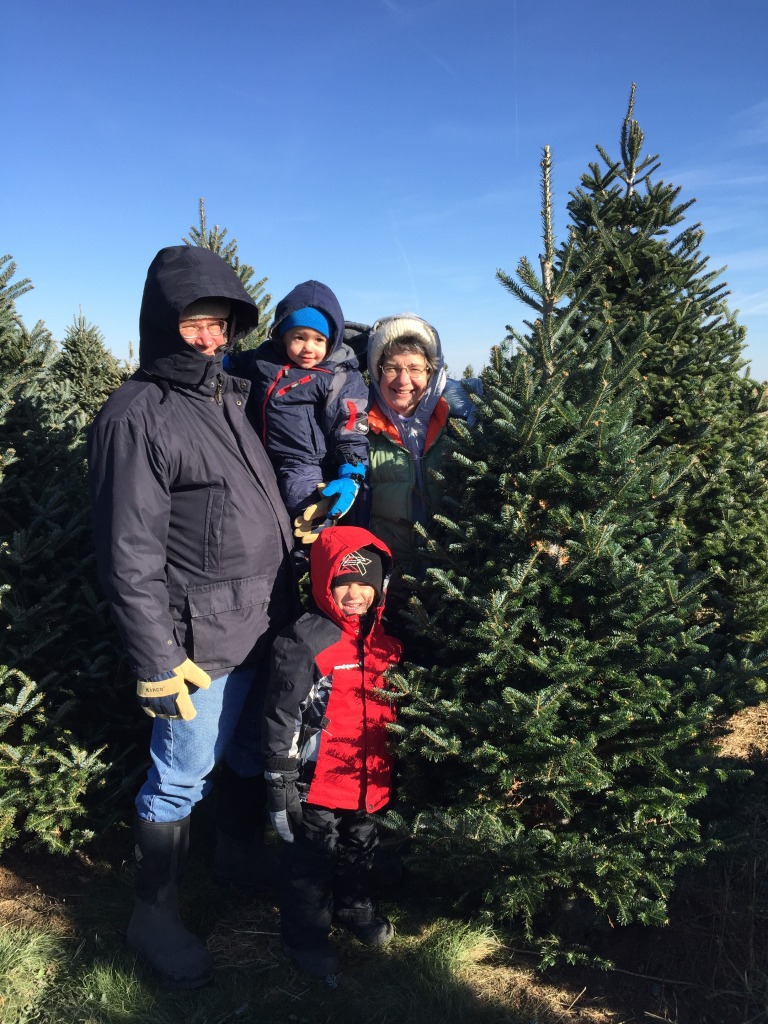 This is our pretty tree that we brought home!  The boys were so excited to pick one out! 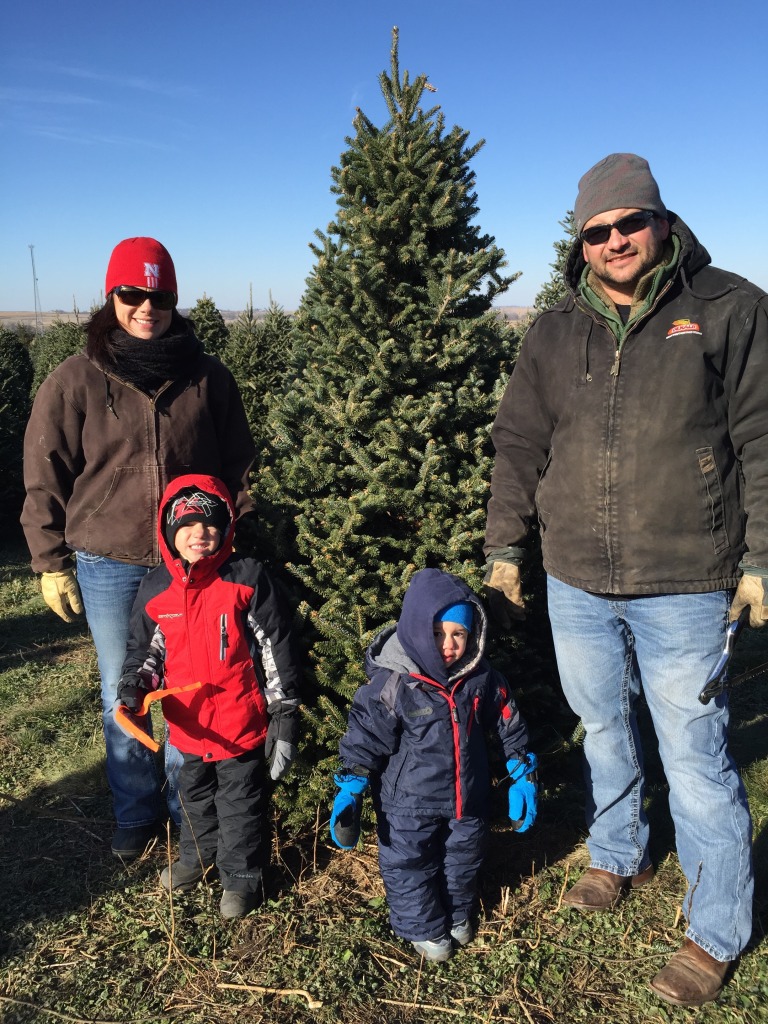 They even wanted to try and help cut it down, but daddy had to take over.

So that was our month in a nutshell.  December is off to a great start too!  I love seeing the boys so excited for the holidays.  Hudson really understands what is going on this year and Ax is just along for the ride!  Have a great month!