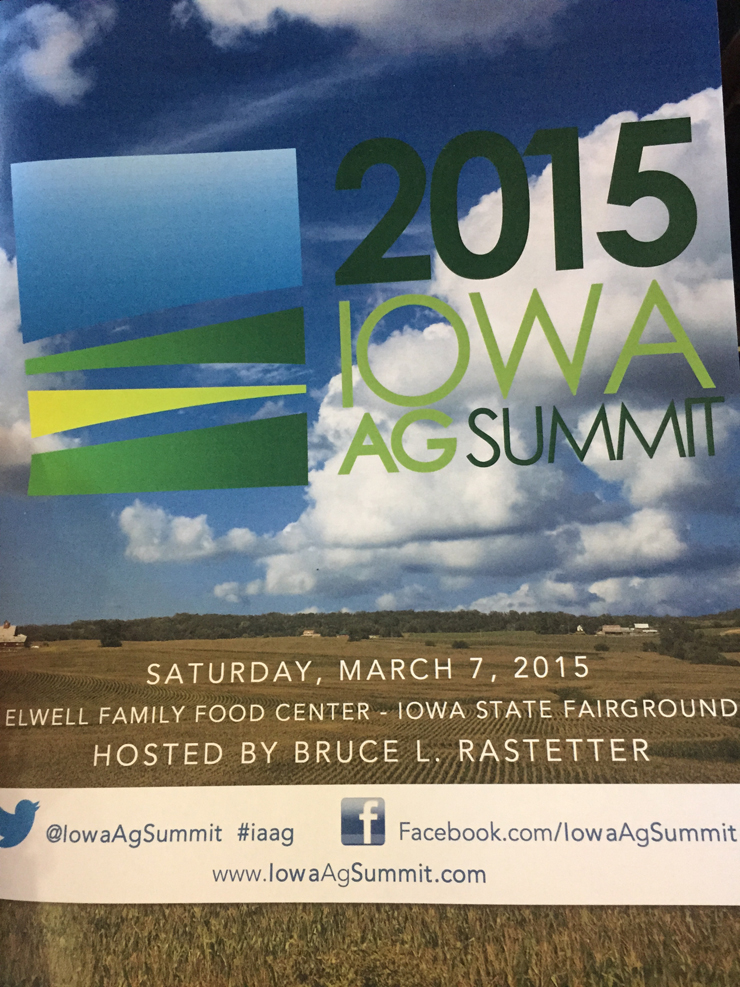 On Saturday, March 7th I attended the 2015 Iowa Ag Summit in Des Moines, IA.  Every four years Iowa becomes the center of American politics and it often paves the way for the presidential election.  This was the first summit of its kind and it focused solely on issues that directly affect Iowa farmers who feed and fuel not only our country, but the world.

The goal (as defined in the Iowa Ag Summit booklet) was, “First, we want to highlight and promote the important role that agriculture plays in Iowa and the rest of the world.  Second, we believe that the Iowa Ag Summit can foster an important discussion between those who are considering running for president in 2016 and Iowans regarding issues that are vital to the Iowa and American economies.”

The format of this summit was very conversational.  Bruce Rastetter was the host and one by one each potential candidate came out on stage and had a conversation with Bruce about these main topics:

Bruce Rastetter, a lifelong Iowan who is a successful entrepreneur of agriculture and energy-related companies, hosted the 2015 Iowa Ag Summit.

Today’s post is going to focus on one of those main topics, GMO labeling.  I found it very interesting that all nine of the potential presidential candidates that spoke that day in Iowa all had the same exact views on it.  I’m going to go through each of their comments on this hot topic.

First up was Governor Chris Christie from New Jersey.  He stated that there are programs in place that already provide safe food.  When asked specifically if GMOs needed to be labeled, he firmly stated, “No” and then said that it doesn’t need a complicated answer.

Former Arkansas Governor Mike Huckabee was next and he said that science is consistently showing that GMOs are safe.  He thinks that a “Country of Origin” label makes more sense than a GMO label.

The third potential presidential candidate to take the stage that morning was former Governor Jeb Bush from Florida.  His comments on GMOs were that we need to celebrate this effort and that they should not be labeled because there is no nutritional difference.

Former Texas Governor Rick Perry’s statement about GMOs and labeling was that we need to do a better job explaining why GMOs are safe for consumers.

U.S. Senator Lindsey Graham from South Carolina was up next and said that GMO labeling is a backdoor way of putting farmers out of business.  He said the bottom line is that we are going to have to push for good science and not political agendas when dealing with GMO labeling.  Science shows that they are safe!

Ted Cruz, U.S. Senator from Texas, spoke at the Iowa Ag Summit next.  He stated that he believes in the science and that it’s important that our food is safe.  He also said that we need to celebrate the science of food and stand up to those against GMOs.

Former Governor of New York, George Pataki, commented that biotech is absolutely critical and that he is very supportive of GMOs.  The science is clear, GMOs provide no threats to consumers and there is no reason for them to be labeled.

Former U.S. Senator Rick Santorum from Pennsylvania expressed that he has seen no reason, scientifically, to label a product that is nutritionally the same.  If it came down to labeling GMOs, then it would need to be at the national level and not the state level.

Last to speak that day at the Iowa Ag Summit was Wisconsin Governor Scott Walker.  He said that we are going to have to combine the hard work of the American farmer with the advanced technology of GMOs to help feed the growing world.  He also said that there is no need to label GMOs since they are safe.

As you can see, each of these candidates had very brief comments on GMOs and labeling.  They each had a short time on stage to discuss a number of topics with Bruce, so they were all very to-the-point with of their answers.  If you want to read what these potential presidential candidates views were on the other topics, you can read all my tweets on Twitter @sarashousehd or see everyone’s comments at #iowaagsummit on Twitter.

Happy National Ag Week!  I’m going to be posting a lot of ag and family farm pictures this week over on Instagram!  Follow along with my posts @sarashousehd in Instagram!

Leave a Reply to How Do Presidential Candidates Weigh in on the Issue of GMOs? | Natural Society Cancel reply