I found out back in February that I was pregnant.  It happened to be right before we headed to the Commodity Classic in Phoenix, so that was fun trying to keep it under wraps at all the receptions and banquets!  My first appointment with the doctor wasn’t until March 10th, so we kept it a secret for a few weeks.

Kevin doesn’t usually go with me to my doctor appointments unless it’s the one with the ultrasound, but when I told him the time for this one he asked if he needed to go.  I said, “Well they will probably do an ultrasound to see if there is one or two babies in there, but other than that it should be pretty simple.”  His reply was, “Oh, there’s only one.”

I’ve always had an early ultrasound with all three of my pregnancies because twins do run in my family.  There have been at least three generations in a row of fraternal twins and it’s always been someone who is not a twin that has the twins….make sense?  So in my families case, my grandma had sisters who were twins.  Then that same grandma (who was not a twin) had twins (a boy and girl) who are my aunt and uncle.  Their sister, my mom (who is not a twin) gave birth to my sisters who are twins.  So the joke was that since there were only three of us and I was the only one who was not a twin that I’d be the one to have the twins.  So since twins obviously run in the family I’ve always had early ultrasounds.

I remember going into that first ultrasound when I was pregnant with Hudson thinking that it might be kind of nice to have twins the first time around.  We wouldn’t know any different right?  Well, there was only one and that ended up being just fine with me!  Then when I was pregnant with Axten I remember thinking, “Oh what if it’s twins this time!”  But then there was just one, and that was just fine with me.  Then this time around I don’t remember thinking that there could be a possibility that it could be twins.  Other than that comment that I made to Kevin about having an ultrasound the thought didn’t really occur to me this time.  I just knew that I’d have an early ultrasound.

Well, was I in for a surprise!

Like I mentioned, Kevin doesn’t usually come with me to my appointments, but he was able to make it to this one. As soon as the image came up on the screen the doctor says, “Huh.”  I looked over at him and said, “what does ‘huh’ mean?”  Kevin then says, “There’s two of them.” 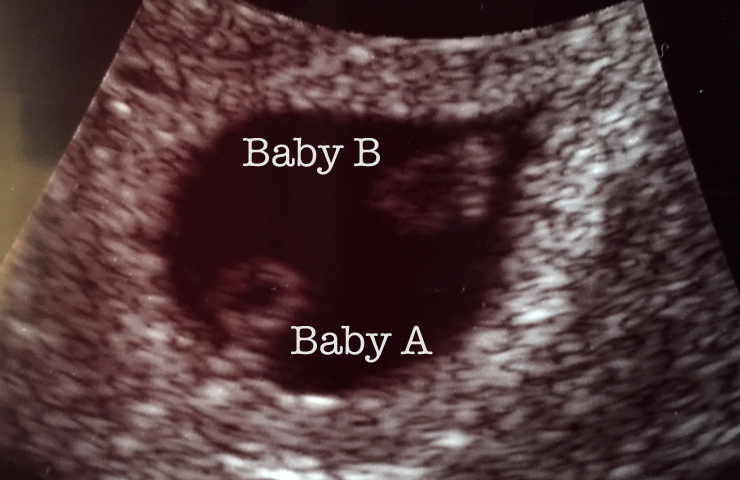 I looked back up at the large screen on the wall and sure enough you could see two tiny little circles.  I just started laughing.  I didn’t know what to do.

The rest of the appointment was kind of a blur.  I remembered him saying something about mono/mono and that they shared a placenta, they were identical, they must have split late, we’ll probably have to deliver you around 34 weeks because of risk of umbilical cords getting twisted, issues with shared blood vessels, etc.

I asked about what my limitations were as far as exercising and traveling.  He said that I can’t really do anything to harm them at this point, so exercising is fine.  Traveling would probably have to stop by 24 weeks.  He said he’d see me again in two weeks.  I did think this was a little strange since I only saw him once a month at the beginning of each of the boys’ pregnancies, but I figured it was because they were twins.

Again, the realization of what he said about the twins didn’t hit until later that night.

Kevin and I decided that we were only going to tell family that I was pregnant for the time being because they were going to have to find out by that weekend since I was heading to Colorado with my family.  We said we’d keep the twin thing a secret until we could announce it some way in the near future to them all, hopefully at the same time.

When I got to the office, I hopped on Pinterest really quick to check out fun ways to announce twin pregnancies.  I made a few secret boards and started pinning things.  That’s when I saw mono-mono twins and it hit me how serious this was.  I started reading and learning about what mono-mono twins were and the complications that go along with them since they share everything except an umbilical cord.  As you can see in the diagram below the Monochorionic/Monoamniotic twins share the same placenta and sac.  So they can literally touch each other and that’s why their umbilical cords getting tangled and wrapped around each other is a major concern. 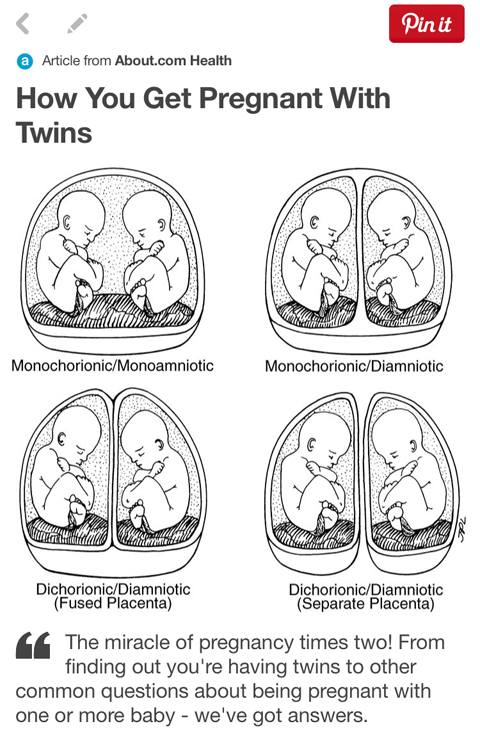 The next few days involved more research about mono-mono twins, mostly about the type of doctors we will need.  Most of these pregnancies get referred to a perinatologist, a doctor who specializes in the care of the mother and fetus at higher-than-normal risk for complications.  This was definitely something that I wanted to discuss with my doctor at my next visit.  Since mono-mono twins only occur in 1% of twin pregnancies, it’s definitely uncommon.

After the first few initial days of researching and then sharing our news with our parents and siblings (that’s a whole other story) I just started making a list of questions to go over with my doctor.  I didn’t have to wait long since my next appointment was just two weeks later.

I went to this appointment by myself since Kevin was out of town for meetings.  As soon as my doctor put the image up on the screen I knew I was seeing something we hadn’t been able to see during the first ultra sound.  Two sacs!!! 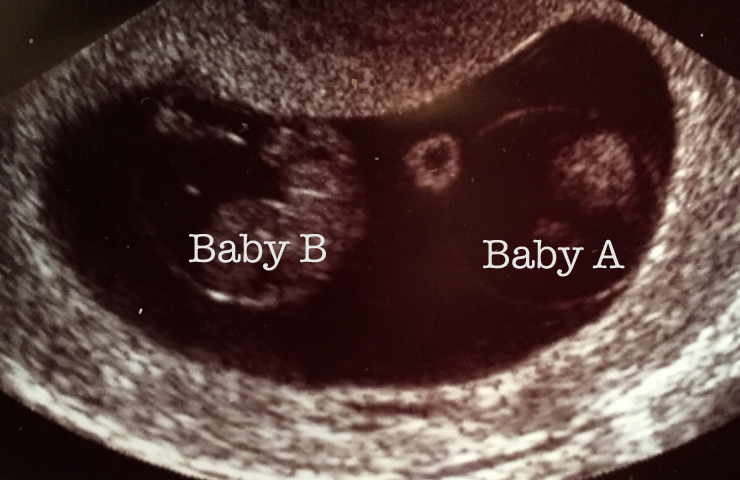 You can see in the image above that were are circles around each of the babies so this meant that they were actually mono/di twins.  They shared the same placenta (making them identical still), but each has its own sac, so they won’t be able to touch each other and get their umbilical cords tangled up!  I was so relieved!

This definitely made me happy, but since they are still identical twins there are things that we need to watch for.  Basically what we need to keep an eye on is that they are both growing at the same rate.  I also learned that I would not need to go to a specialist unless a.) I go into pre-term labor or b.) the twins start growing differently (one is bigger than the other.)  But as long as they keep measuring the same like they have so far then I can stay at my current hospital with my doctor.  Yeah!

We are still shooting to deliver these twins between 34-37 weeks.  The longer the better!  So I’m thinking they will arrive the end of September or beginning of October sometime!

If you made it to the end of this long (for me) post, thank you!  My next post about the twins with be a Q&A post.  We get asked a lot of questions by everyone (which is fine!) and I thought I’d put them all together in one post.  Let me know if you have any questions and I’ll get them added to my running list!  Thanks and have a great day!