My first experience with cattle……well, lets just say that I hadn’t ever had the chance to help sort cattle or help with the births of calves, but that has all changed now!

Kevin and I meet back in March of 2006 and when I went and visited him on his farm that same month it was right at the start of calving season.  That means that he had to go check on all of his cows to see if anyone was getting close to having their calf or to see if they were already in labor and if they needed help or not.  Basically, he couldn’t get far from home for about a month or so and had to go out in the freezing cold temps every few hours (day and night) to check on them.

So, that March when I went to the farm to visit, the forecast was for a big snow storm to be rolling through that area very soon.  It finally hit and dumped a good foot of snow on the ground.  That morning Kevin went out and checked on the cattle and came back inside and told me that he needed help getting a momma cow into the barn because it looked like she was having issues calving.

So I bundled up as best I could, since I hadn’t really packed for this type of entertainment, and headed out in the freezing cold temps and waded through the foot of snow to the barn.

Kevin had gotten the momma (we’ll call her Martha) close to the barn, but there were two other cows with her.  He just wanted “Martha” to go into the barn, so, he puts me in this 12 foot opening and tells me that he’s going to push the other two cows towards me and to let them out, but keep “Martha” in.  I said OK (like I knew what I was doing).  So he starts walking the cows towards me and all of a sudden they started running right at me!  So I got the heck out of the way!  🙂  Oops!  “Martha” got out too!  This didn’t make Kevin very happy, but since I was new around there he didn’t yell at me too bad!  🙂

I told him that he failed to mention to me that waving my arms and yelling at them would have gotten them to stop running, but oh well!

We finally got “Martha” in the barn and she was not a happy camper.  It was obvious that she was in pain.  So he called in reinforcements.  His parents live just three miles down the road and they headed up to help and Kevin also called the vets which took forever to get there due to all of the snow and unplowed roads.

When his parents got there, his mom (whom I had just met a couple of days before) and I stood off to the side in the barn and his dad helped Kevin get a harness on “Martha” so they could tie her up.  That took a couple of tries since “Martha” was in so much pain and didn’t want to cooperate!  When they finally got her in position for Kevin to check her he realized that the calf was breech.  Good thing the vets were on their way already!

When they got there, it took two tranquilizers to get “Martha” to lay/calm down.  They ended up having to use a crank to pull the calf out.  Poor thing!

When all was said and down “Martha” had a healthy bull calf that was named “Buster”. 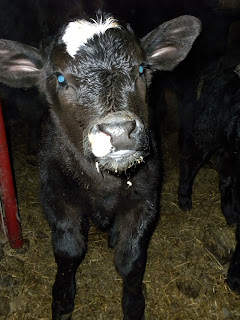