FARM FAMILIES
U.S. farms may be diverse in size and scope, but the USDA reports that the vast majority are family operations.

KERNELS OF TRUTH
The next facts about corn come from Iowa Corn and they are called “Kernels of Truth”.  On their brochure it says, “Corn ingredients are important in many foods, but they are often present in amounts too small to justify price changes at the grocery store.  The graph below illustrates how much corn is in many popular items at the grocery store.”

FOOD DOLLAR SERIES
On March 14th, the USDA published “A Revised and Expanded Food Dollar Series–A Better Understanding of Our Food Costs.”  On the Iowa Corn website it shows that “the farmers share of the food dollar is even less than originally thought.  According to the report, just 11.6 cents of every dollar spent on food makes it back to the farmer.”
“Only a small percentage – 11.6 cents – of our food dollars actually pays for the production of the raw commodity itself,” said Dick Gallagher chairman of the Iowa Corn Promotion Board and a farmer from Washington.  “I think it is easy to see that what you pay at the store has even less to do with the price of corn.”
“The USDA food dollar series measures annual expenditures by U.S. consumers on domestically produced food.  The new food dollar replaces the old marketing bill series, which has been discontinued because of measurement problems and limited scope.  The industry group’s series identifies the distribution of the food dollar among ten distinct food supply chain industry groups.” 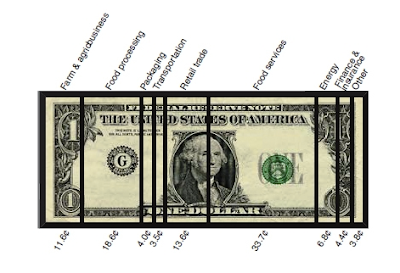 ONE BUSHEL (56 LBS) OF CORN PROVIDES: