This morning Marian (Kevin’s grandma) and I helped Kevin put CIDRS in 22 of our cows.  Since there were only three of us, we all had many jobs to do.  Most of the time Rhonda (Kevin’s mom) and Jim (Kevin’s brother) get to help out, but they are teachers and are just finishing the last few days of school, so they didn’t get to help today.  But they will next week I’m sure, even if they don’t know about it yet!
We use CIDRS to get the cows all on the same ovulation schedule so we can AI (artificially inseminate) them at the same time which in turn will have them calving at the same time next spring.  CIDRs are t-shaped devises that contain progesterone.  These are placed in the cow’s vagina where it continuously releases progesterone.  Upon removal, the drop in progesterone triggers estrus and ovulation. 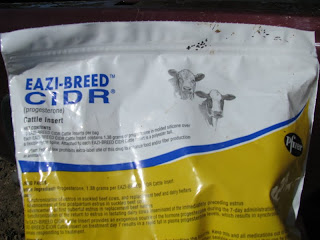 They also get a shot of Cystorelin which is used as a precautionary measure to help prevent ovarian cysts.  Those cysts could cause a cow to not breed. 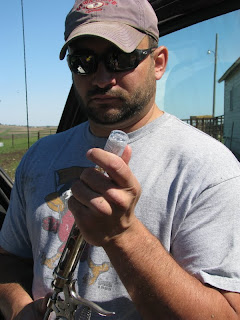 It didn’t take us long once we got them all sorted.  It has rained the last few days here so it was really muddy and I found it hard to walk/easy to get stuck in the mud, but we managed to get them all sorted and ready to go.
Some of the cows just had calves or are almost ready to calve so we aren’t going to AI them this time around.  Here are the cows that are going to have CIDRS inserted.  They are hanging out on the back side of the barn. 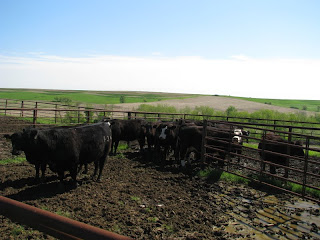 Once we are ready to start, Kevin will bring two at a time through the barn where I will be waiting to put a bar behind them so they can’t back up.  While I am waiting on the two cows to come through the barn, I put the CIDRS in the applicator (Kevin is inserting it in the picture below). 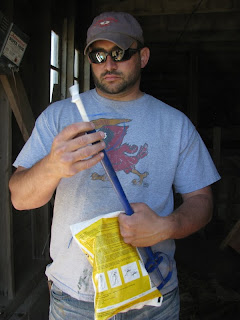 The applicator with the CIDR in it is then placed in a bucket of water and iodine to keep it sterile. 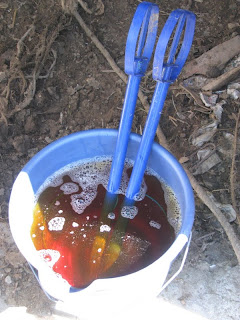 Once two of the cows are in the barn and past the part where I insert a bar to keep them from backing up, I run outside and catch them in the head gate. 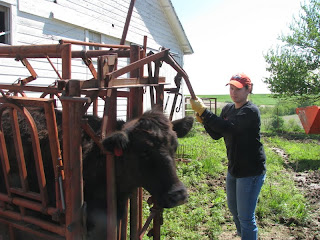 Marian, who will be turning 84 next week, has helped breed cattle for many years.  She’s a pro!  Her job was to insert a metal bar through the cattle chute once the cow was in the head gate to keep them from backing up and/or kicking Kevin when he get’s in behind them to insert the CIDR. 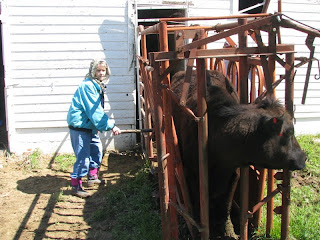 Next Kevin gives the cow a shot of the Cystorelin and I write down the cow’s tag number on a pad of paper so we can keep track of which cow is breed to which bull. 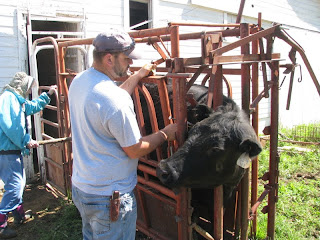 Then, Kevin get’s in the chute to insert the CIDR while I hold the tail.  It’s a messy job, but somebody’s got to do it! 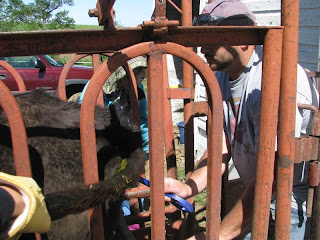 After that, I let them out and go into the barn and wait for the next two cows.  In five days, Kevin will pull the CIDRS out and give them a shot of Estrumate.  Then they will be ready to breed 2-3 days after that!  Stay tune for more exciting AI stories!