It’s amazing what you find when you do a little lot of weeding!  I had gotten behind these past few weeks and it was starting to get really overgrown.  A couple of nights ago, I was out pulling some weeds when Marian (Kevin’s grandma) came over and helped me.  That helped a lot!  After about an hour we could see my carrots and green beans again!
I also found a few zucchini that night.  Then last night I went out and finished weeding and then I raked up the dead grass from when I mowed the other day and spread it out to help keep the weeds/grass from growing.  I’m hoping since I have a nice thick layer of grass that I can now keep up with the weeding! So far I’ve picked about 15 or so zucchini and a half dozen yellow squash.  I also picked a few cherry tomatoes.   I noticed that one out of four of the cherry tomato plants is absolutely LOADED with cherry tomatoes.  Even if the other three don’t produce many, I will have more than plenty with this one plant. 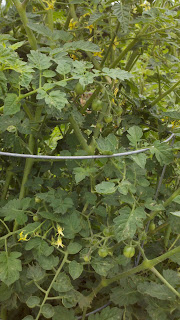 As you can see my sweet corn stood itself back up after the wind storm the other day!  That made me very happy!  I planted it more for a windbreak than anything. 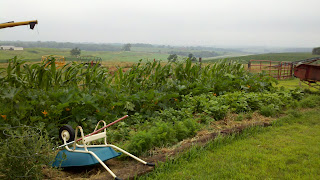 Last night I was talking to a friend of mine, and I mentioned how many zucchinis I had so far.  I told him that I’d bring him some next week when we play sand volleyball and he suggested that we get a group of friends together and each bring a different recipe to try out.  (FYI, Chad is an excellent cook!)  I thought that sounded like a great idea!  So stay tuned for how that turns out! 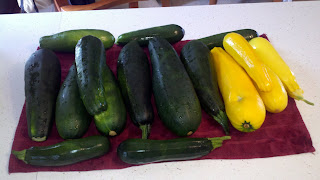 How is your garden looking?  Have you started picking veggies from it yet?  Has the wind beaten it to death?  Any tips on how to stay on top of the weeds?