Does anyone else still have lots of green tomatoes in their garden like I do?  I’m not sure if it’s because I planted my garden so late (middle of May) or if it’s normal, but I really like to can, so I hope those green tomatoes turn red soon!

I friend of mine said that that I can pick the green tomatoes and place then in a paper sack, but I need to make sure that the part of the vine is still attached to the tomato.  By placing it in a paper sack it will release some kind of gas (***it’s ethylene gas) (Steve is full of useful knowledge, but the “gas” word was one I hadn’t heard of so I don’t remember what it was.) which will cause it to ripen in the paper sack.  I may have to try that next week when I’m home!  I’d really hate for all those tomatoes to go to waste!

A few weeks ago, when I was out at my parent’s house in Nebraska for work, my mom and I combined our tomatoes and peppers and made a big batch (4 batches to be exact) of salsa.  We then put it into pint jars and sealed them using a water bath method.  Below are the directions and pictures from when I did another large batch at my house shortly after that.  You can either make a batch and eat it right away, but if you want to can it I would recommend making four batches.  That will get you about 12-14 pints of salsa.  (My thoughts are if you are going to make a mess, you might as well make it worth it by making a lot of salsa!)

Directions:
These were the tomatoes that I used for the batch of salsa that I made at my house.  There were some Romas too, but I think those were already chopped up when I took this picture.  It doesn’t matter what kind of tomato, but the big ones are often juicier than the Romas.  So if you have both on hand, I’d mix them together! 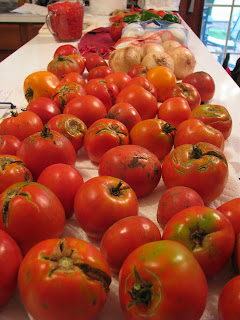 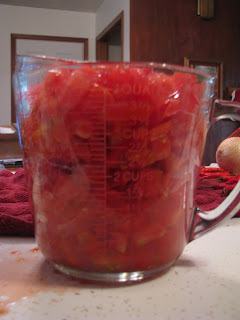 Place them in a large bowl: 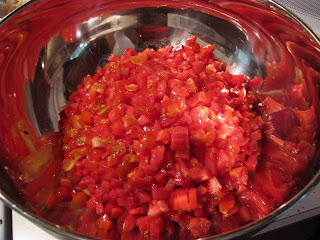 Chop up the onion: 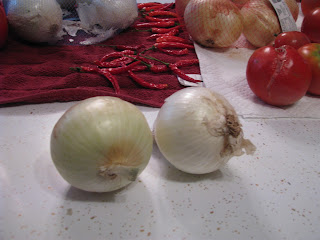 Try not to cry because of the onion fumes! 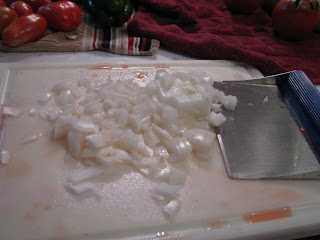 Throw those in the large bowl with the tomatoes: 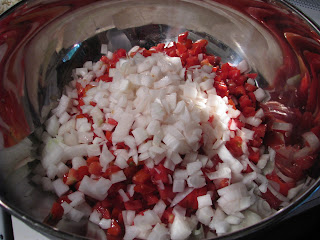 Notice your son has woken up.  I started making salsa at 6:30 am, hoping that I could get a good start on it before he woke up that morning. 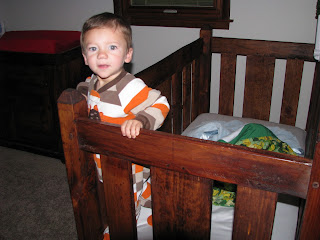 Next up is the jalapenos.  If you don’t want your hands to burn (and especially if you have a small child who you wipe noses and change diapers for) I would highly recommend wearing plastic/or rubber gloves to handle the jalapenos. 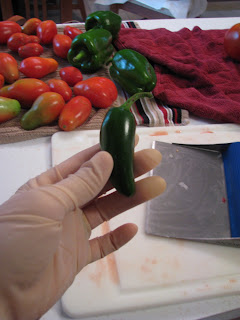 Notice how your little helper is now wearing your shoes: 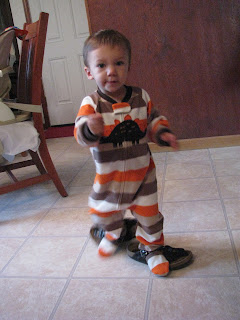 And now he is wearing his daddy’s shoes: 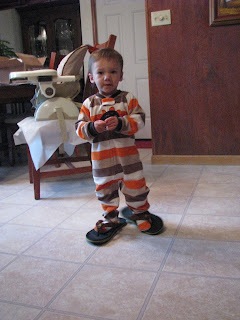 Cut off the tops of the jalapenos, cut them in half and scrap out the insides (including all or most of the seeds): 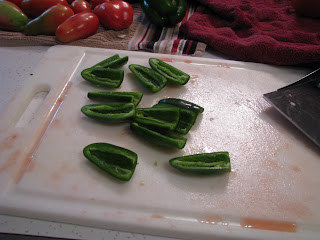 Now he is wearing my gardening/mowing shoes and tracking dirt all over: 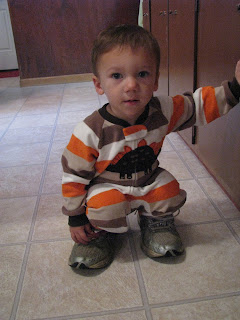 Toss the diced jalapenos into the large bowl with the onion and tomatoes and give it a good stir: 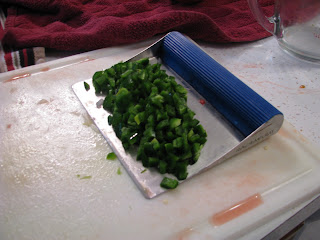 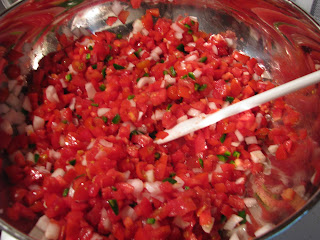 Roughly chop the cilantro and add it to the salsa: 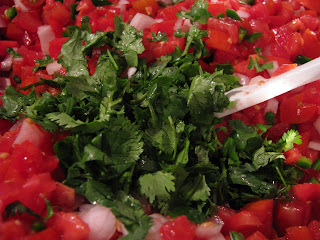 Then add the salt and sugar: 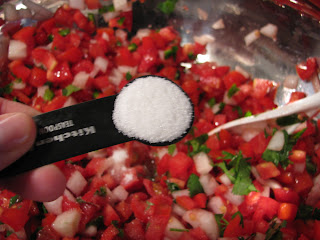 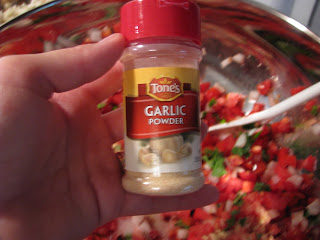 Also add the 1/4 cup of vinegar (per batch) and mix the salsa well.  This is where you can stop and eat it (although I highly recommend letting it sit in the refrigerator for at least a day to give all the flavors a chance to mingle together). 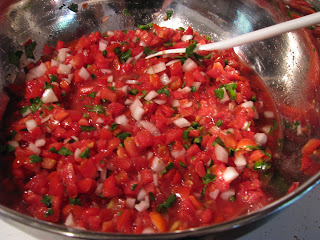 But if you made an extremely large batch like I did so you can can it, then this is the start of the canning process.  While I was making the salsa, I had my dishwasher running to clean/sterilize the jars.  Once it made it through a complete cycle, I started it again so the clean jars were nice and hot. 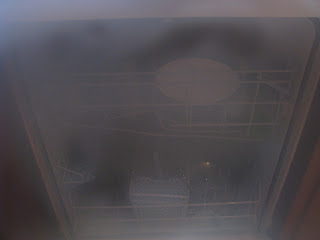 I don’t have pictures of the next few steps, not sure why, but I’ll walk talk write you though them.

Most recipes that are for canning salsa say to bring your salsa to a boil on the stove, but my mom and I don’t do that step.  So it’s up to you!

Anyways, grab a steaming hot jar out of the dishwasher and place the salsa in it leaving a one inch head space.

Fill all jars this way.  Meanwhile place the lids and rings in a pot and bring that to a boil for a few minutes to sterilize them too.

Once you have all your jars filled, place a lid and ring on it and tighten the ring.  Then place the jars in a hot water bath.  Make sure there is at least one inch of water above the jars when they are all in the water: 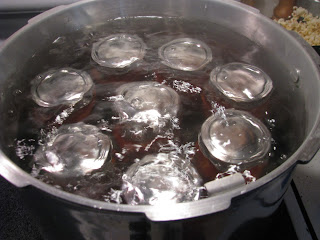 Bring the water to a boil and then start your timer for 15 minutes.  When your timer goes off, you can take the jars out of the boiling water and place them on a towel on the counter to cool and seal. 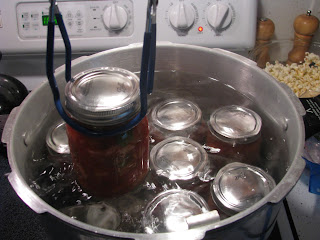 Over the next hour or so, you should hear a popping noise each time one of the jars seals.  Before you put them away, double check to make sure that all the jars have sealed!  Enjoy! 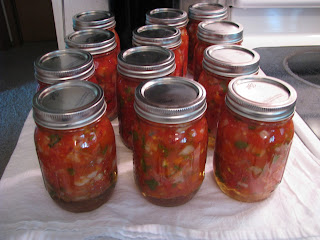