A few months ago my dad told me that he wasn’t planning on going to the Penn State football game in November, so us girls could have the tickets if we wanted them.  So my mom (Sharri), my one sister (Megan) and I decided to go and each take a friend.  We decided to fly in and out of New York City and spend a few days exploring the city since none of our friends had ever been there before.  So here is our story with the sights that we saw and the places we visited and ate at.  I’ll do it one day at a time so as to not bombard you with a lot of pictures and information!
Thursday 11.10.11
Well, the day didn’t start out as planned…We got to the airport right on time just to find out that I left my cell phone on the console in my car back in the parking lot.  So the nice van driver rushed us back over there for me to grab it.  When we got back to the airport five out of six of us got checked in and then when my mom was checking in they told her that our flight was cancelled!  Not delayed, CANCELLED!  Ugh!
Luckily we were still standing downstairs at the ticket counter, so the agent was able to get us all on the next flight.  But instead of having a direct flight to NYC and being there before noon, our new flight didn’t leave for a few hours and we then had a connection in Atlanta and weren’t scheduled to land in NYC until a little after 6pm that night.
Due to the the flight changes we had to cancel our tickets to Ground Zero for that afternoon and unfortunately we weren’t able to rebook them as all the time slots were full while we were there in the city.
So, while we were waiting for our flight to Atlanta, we went and ate breakfast at the one and only restaurant in the Omaha airport.  We then wasted some more time at our gate.

Once we landed at the LaGuardia Airport in New York City, we got in a taxi line, but it was ridiculously long!  So we found a car service and called them and they picked us up in 15 minutes!  I’ll have to remember that the next time we head to the Big Apple!  (And they weren’t that much more than what a taxi would have been!)

We then headed to check into our hotel–the Holiday Inn (125 W. 26th Street).  It was a pretty new hotel, but the rooms were TINY!  We had four of us girls staying in one of the rooms.  We had to do a little strategic rearranging to get all of our bags to fit and Megan had to unpack hers so we could put it up on top of the “closet”.  We made it work though.  Even though the room was very small, they made up for it with mirrors and outlets in the bedroom part so we had plenty of room to get ready.  And it wasn’t like we were going to spend much time in our room anyway! 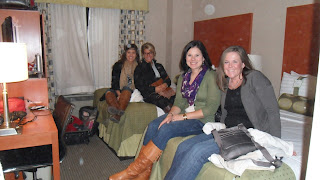 After we unpacked and freshened up, we headed out to find a place to eat since we were all starving!  The gentleman at the front desk recommended the Italian restaurant right across the street from our hotel. He said we will come back smiling.  So we decided to check it out.  It was called Tre Dici’s and it was wonderful!  For an appetizer we ordered the special for the night which was Firecracker Calamari.  It was kind of like mixing hot wings with fried calamari.  YUM!  The rest of our food was excellent too!

After that great dinner, we decided to do a little walking, so we headed north up to Times Square.  By the time we walked from 26th Street to 42nd Street it started to mist and then rain lightly, so we headed home.  We were all really tired anyways from getting up at 4am that morning! 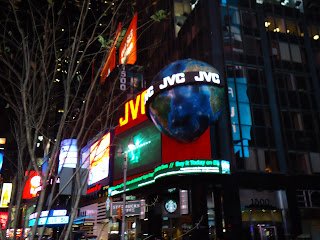 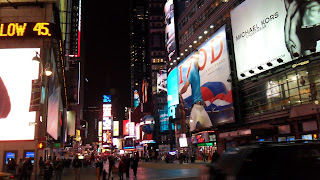 When we got back to our hotel we all went to bed right away because we had to get up at 4:30am the next morning to go see Good Morning America!

Stay tuned for Day 2 in the city tomorrow!