When Kevin and I traveled to Panama a few weeks ago, we arrived without luggage.  In fact we were without luggage for two days.  I was actually in Panama longer without luggage than I was there with it.  So that made for an interesting few days.
When we left home that morning, it was .5 degrees.  We were heading south to Panama where it would be in the high 90s.  So almost 100 degree difference makes you think about what you want to wear on the plane while you are traveling!
Kevin and I are both notorious for not packing a change of clothes in our carry-ons.  Usually we are both hauling computers and I usually have my purse and/or a camera bag.  We’ve also never had lost luggage, until this time.
When we left home that morning I was wearing jeans, a cotton short sleeved shirt, long-sleeved (lightweight) cardigan, running shoes and a Northface jacket.  My only carry-on was my camera bag that was also serving as my purse.  I had a horrible head cold so I had all the medicine with me in my camera bag (except the cough medicine which was over 3 ounces so it had to go in my checked bag) along with some lotion, one bobby pin and eyeliner that I randomly threw in there that morning.
Kevin had on jeans, a long-sleeved button down shirt, a sports jacket and leather shoes.  His carry-on was his computer bag that basically just had some papers and his computer in it.
We new our clothes would need to be changed as soon as we got there, but the layers were nice for traveling!
Well, due to a TOO short connection at Chicago O’hare, we ended up getting rerouted through Newark, NJ and then down to Panama.  So instead of getting there at 2:30 that afternoon, it was 11:30 at night when we finally got to our hotel!  🙁 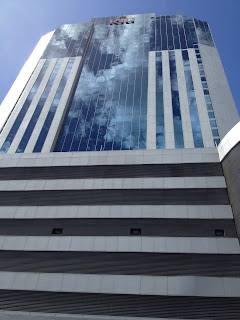 When we realized that our bags didn’t make it, we found out that they would be in the next afternoon and would be delivered directly to our hotel.  So we headed to our hotel, kicking ourselves for not carrying a change of clothes in our carry-ons.
The next morning we ended up sleeping in a little bit and then headed down to the gift shop in the hotel to see what they had to help us out until we got our bags later that day.  We picked up a couple of shirts for Kevin, a sundress for me, some men’s deodorant, a bottle of hairspray, a brush and comb.  We were able to get toothbrushes and toothpaste from the hotel for free the night before.  I made due with these items and the lotion and eyeliner that I randomly put in my carry-on.  Luckily the hotel room had a blow dryer, so I could actually fix my hair and get it to look pretty normal with the crappy bush and hairspray! 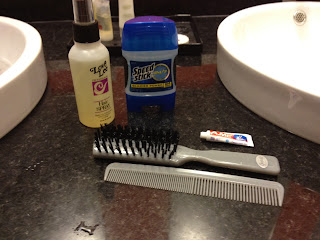 When our luggage didn’t arrive that day, I filled up the bathroom sink and washed a few pieces of clothing that night.  They air-dried over night and the next morning they were still soaking wet thanks to the humidity there in Panama.  So then I had to blow dry the pieces that we needed (underwear) and we put on some of the same clothing that we wore the last two days. 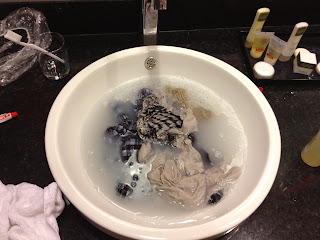 Kevin had to go to meetings that day and I went to the spouse breakfast and afterwards I found some help from the hotel concierge in helping me locate our luggage.  After checking back with here a few times, she was able to confirm that it was on it’s way to the hotel.  When I got up to my room a little while later, there it was! 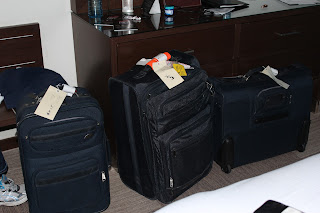 By this time it was Monday afternoon and I was heading home on Wednesday morning.  Oh well!  At least we didn’t have to go buy more clothes or wash any more of it in the sink!  We also found out that we can get by on a lot less clothes, so maybe we won’t back so much the next time we travel!
So, from now on when I travel (I’m only speaking for myself as I doubt Kevin will change his ways) I will make sure I have a few essentials in my carry on bag.  Some of the items will include:
I hope this doesn’t happen again, but if it does maybe we’ll be a little more prepared!