Every year our cows are bred around the beginning of June so they will have their calves around the beginning/middle of March (the gestation of a cow is normally 283 days).  The weather in March can vary drastically from year to year.  It may be in the 70s or rainy or blizzarding (or all three) during March in Iowa.  You just never know!
This year during the month of March it has snowed a few times.  It’s also been fairly chilly and windy too.  Not the most ideal calving weather, but there’s not much we can do about it.  (It’s suppose to be in the high 60s by Friday!)
When Kevin goes out to check on the cows to see if anyone is starting to go into labor, he also checks on all the little calves that have already been born (so far we have six on the ground).  He checks to make sure that they are dry and getting enough to eat.  We had a couple born late yesterday.  He found one in a mud puddle (which is about the worse place for a calf to be born) and the other one was a twin who’s momma was paying attention to the other calf.  So he picked them up and took them into his Grandma’s house next door to us.  Luckily she has a utility room that works good to warm up calves in. 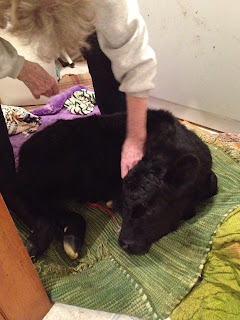 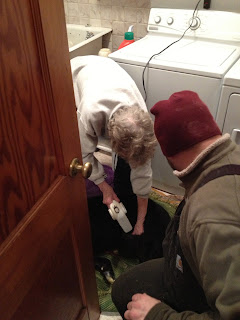 If Kevin wouldn’t have caught them when he did, they probably would have froze to death.  Being a farmer is sometimes a 24/7 job!  Kevin got about an hour of sleep last because of these two calves and then he had to pull another one this morning at 5:30.  When a cow is having problems giving birth to their calf by themselves, sometimes they need a little (or a lot) of assistance.  We usually try to get the cow penned up so we can wrap straps around the front hooves of the calf.  Then Kevin will pull the calf out of the momma cow.  Sometimes if the calf is larger, we have to get the crank out which gradually pulls the calf out.  Both of these ways of pulling a calf would be similar to when a doctor would use forceps to help deliver a baby.

Kevin just went out and check on the cows and none of them look like they are going to have a calf tonight.  Things he looks for is if a cow is off by herself, if she’s holding her tail away from her behind, if her water has broke or if he can see hooves sticking out.  Since none of this was going on just now, hopefully tonight will go a lot smoother so he can get a little shut eye! 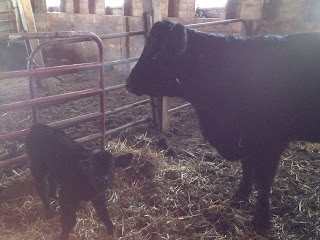 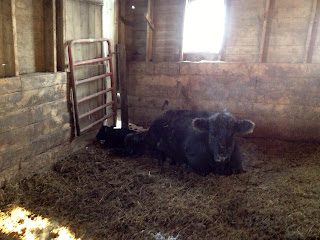 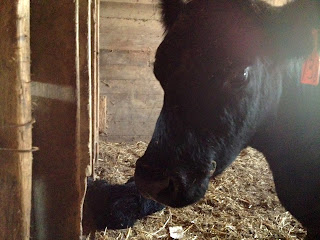