Harvest was in full swing in our area, until yesterday when we received two inches of rain!  We’re still a few days out from starting on our farm, but it’s getting close!  Kevin tested the moisture last Friday and it was still too high.  If we pick it too early, then we have to put it in the grain bins and dry it, which costs money to do.  So it’s better and easier if it dries in the field prior to harvest.
While Kevin’s waiting for the corn to dry down a little more in the fields, he’s been working cattle, seeding some cover crop, mowing hay one last time and working on the combine.
Fall is definitely a busy time of the year for farmers because a lot of us wean our calves right around this time.  Kevin had scheduled the cows to have ultrasounds done about two weeks ago, so we moved them up the road to our home place. 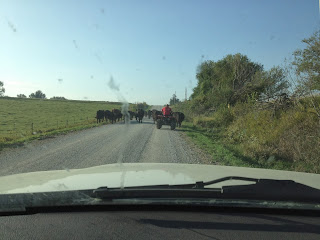 While they were here, we separated the calves from their mommas and split them up into different pens.  One had the heifers, one held the bulls, and one had the bulls that were going to become steers after their were castrated.  Kevin said this is probably the best set of calves we’ve ever had!

After the momma cows were all preg-checked (the vets check to see how far along they are with their pregnancy) we sent them back to pasture until we have some cornstalks to put them on.  The calves all stayed at our place and Kevin had the vet lined up to come out last week to give them all their shots and castrate the steers.  He is currently feeding them a special ration of receiving chow, which is a transitional feed until they are ready for the regular feed.
Our American Bulldog, Diesel, actually helped us move the calves around the other day.  He’s not much of a cattle dog, but he acted like he knew what he was doing that day, so maybe there’s still some hope for him!  🙂 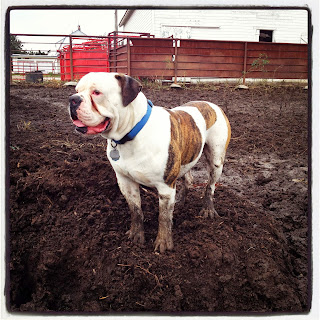 Last Thursday Kevin seeded some cover crop in the areas that we had silage cut.  He did that so the cattle would have a little extra to eat when they get turned out onto cornstalks in a few weeks. It also helps make healthier soil and preserves the nutrients.  The cover crop was a mixture of rye grass, radishes and turnips which the cows love!
This weekend he was out mowing hay for the last time.  Now he’s just finishing up a few other things that he wanted to get done before harvest and if it dries up soon, hopefully he’ll be in the field harvesting in the next few days!
It’s been a busy few weeks with cattle, but soon Kevin will be in that combine for long hours each day!  I know HD is excited to ride along with daddy and AJ will get to go for the first time this year!  Stay tune for some pictures of the boys riding along!