About a week and a half ago we had a Taiwan Grain Production and Quality Study Team come and visit our farm in SW Iowa.  This was the first international group that we have had visit, but I know it won’t be the last!  This group was in the United States for 10 days.  They visited farmers and looked at crop fields in Nebraska, Iowa, and the New Orleans area.  They were also lucky enough to get to go to the Iowa State Fair while they were here too.
This group was traveling with the U.S. Grains Council, which is a private, non-profit partnership of producers and agribusinesses committed to building and expanding international markets for U.S. barley, corn, grain sorghum, and their products.  The Council is headquartered in Washington D.C. and has nine international offices (one of which is in Taipei, Taiwan) that oversee programs in more than 50 countries.  Their main focuses are to promote the value of trade, advance food security, be a trade policy resource, and be a reliable supplier. 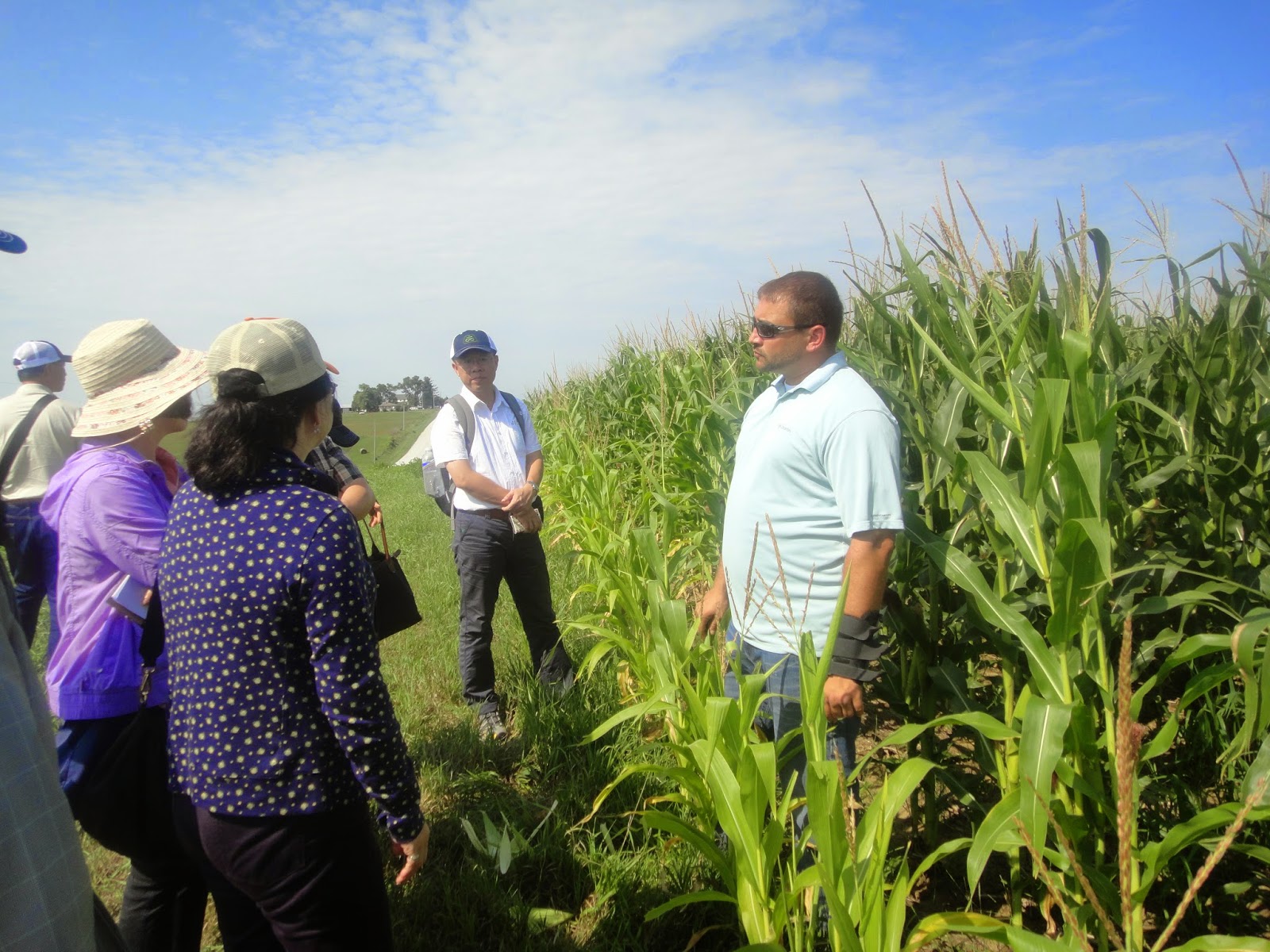 There were nine participants that came to our farm.  Mr. Clover Shueh-Yi Chang is the Director of the U.S. Grains Council Taiwan office and Kevin and I have known him for a few years now.  It was fun to have him come to our farm and see where we live.  Kevin’s been to Taiwan, but I haven’t yet and Clover told me that I need to come with Kevin next time!  Sounds like a plan to me!
One of the ladies from the group was Ms. Reuy-Perng Lin and she is the Section Chief, Council of Agriculture in Taiwan, which I was told was the equivalent of the head of the USDA here in the United States.  She was really interesting to talk to.  There was also the Chairman of the Poultry Association, Managers of agriculture businesses, a Specialist in the National Farmers’ Association, a farm manager, and a professor with the group. 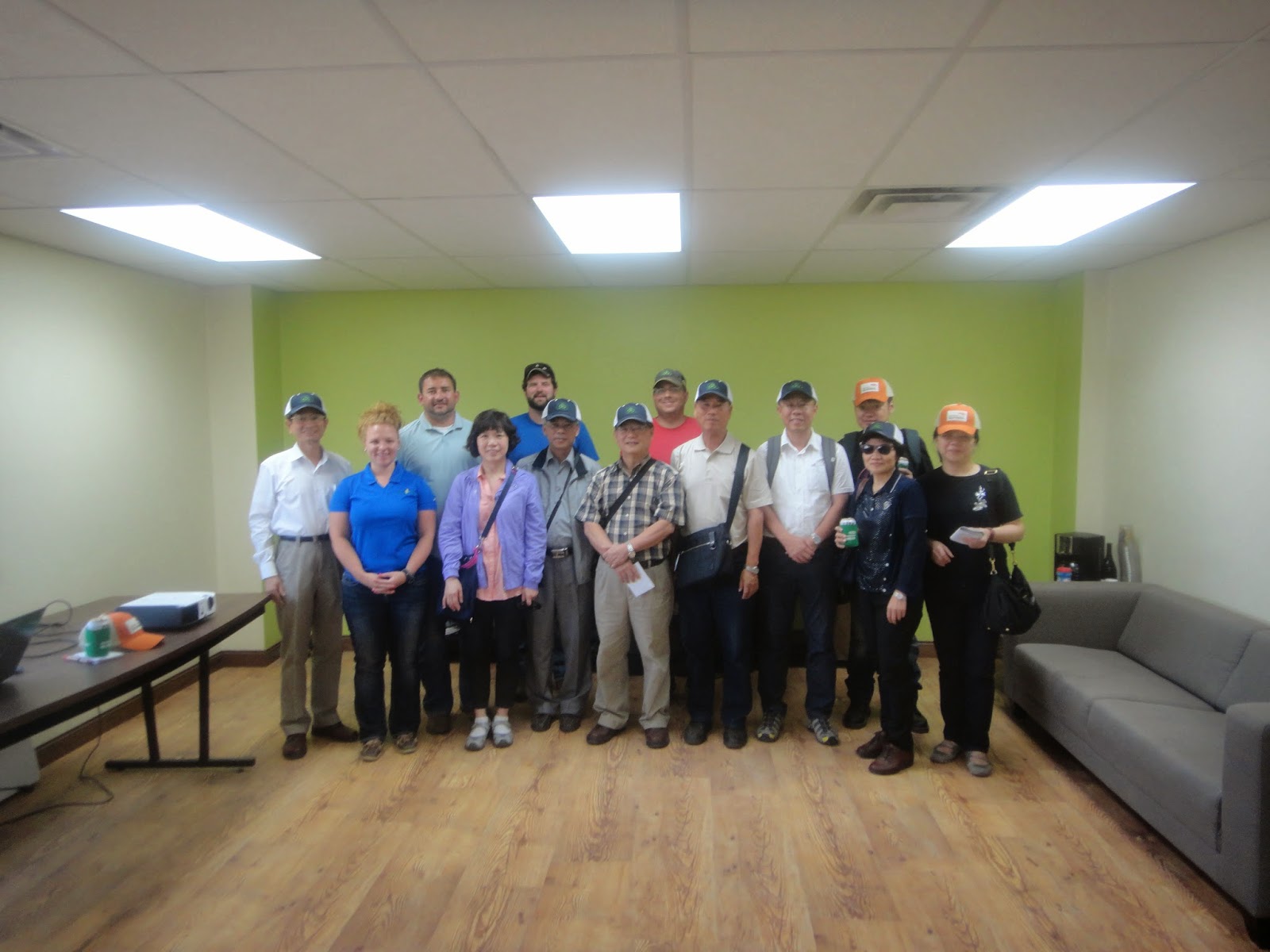 They had already stopped at a soybean and corn field of ours on their way to our house and also a machine shed to see some different types of equipment and meet with the Pottawattamie County Corn & Soybean Grower President, Shane Schaaf, and Steve Killpack.
They asked a lot of questions about being a beginning farmer today, GMOs, equipment, what we feed our cattle, and how the crops were doing this year, among many others. 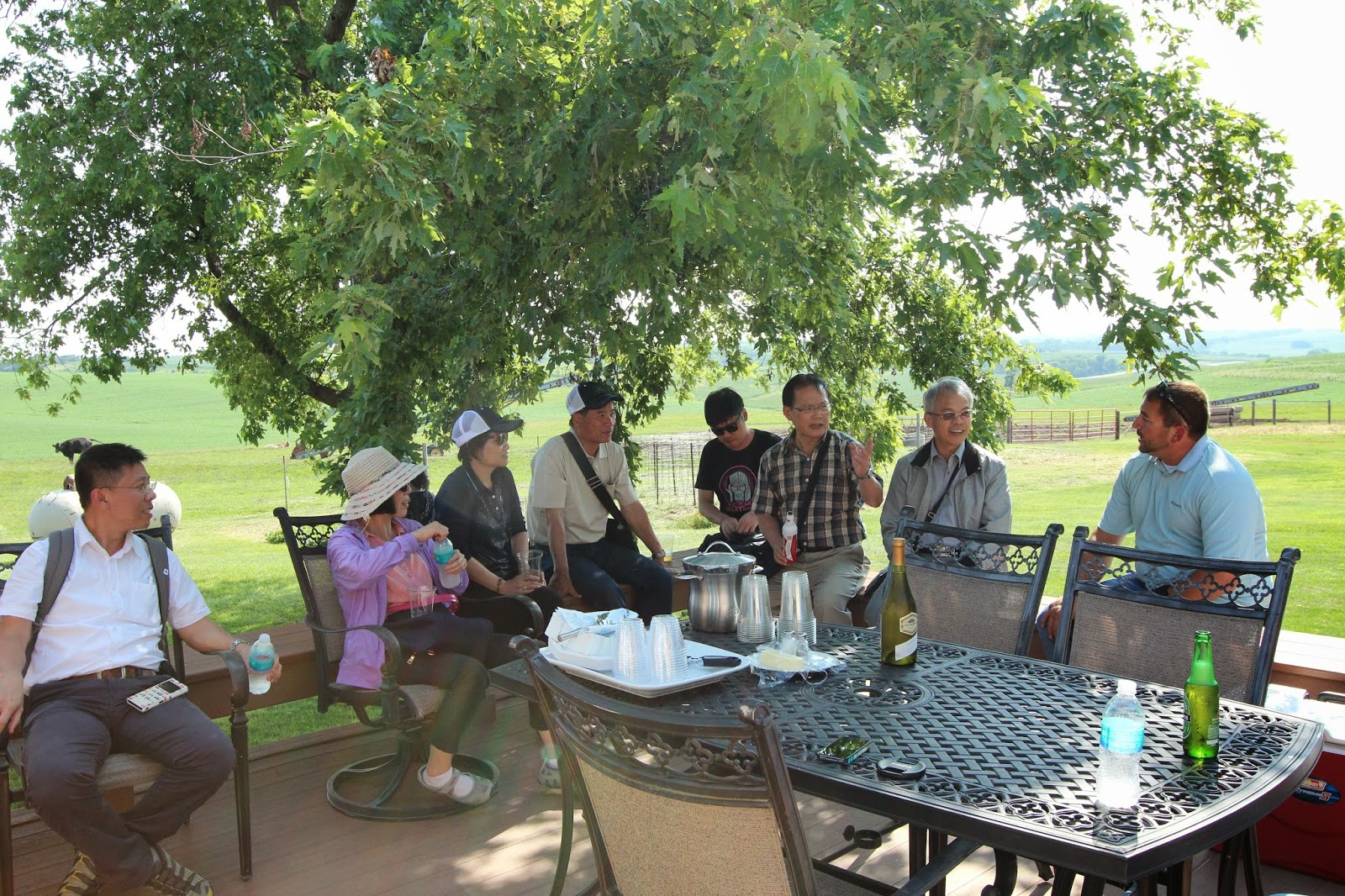 When they arrived at our farm, it was a perfect day outside, so we sat on our back deck and talked for awhile and then walked around our farm. 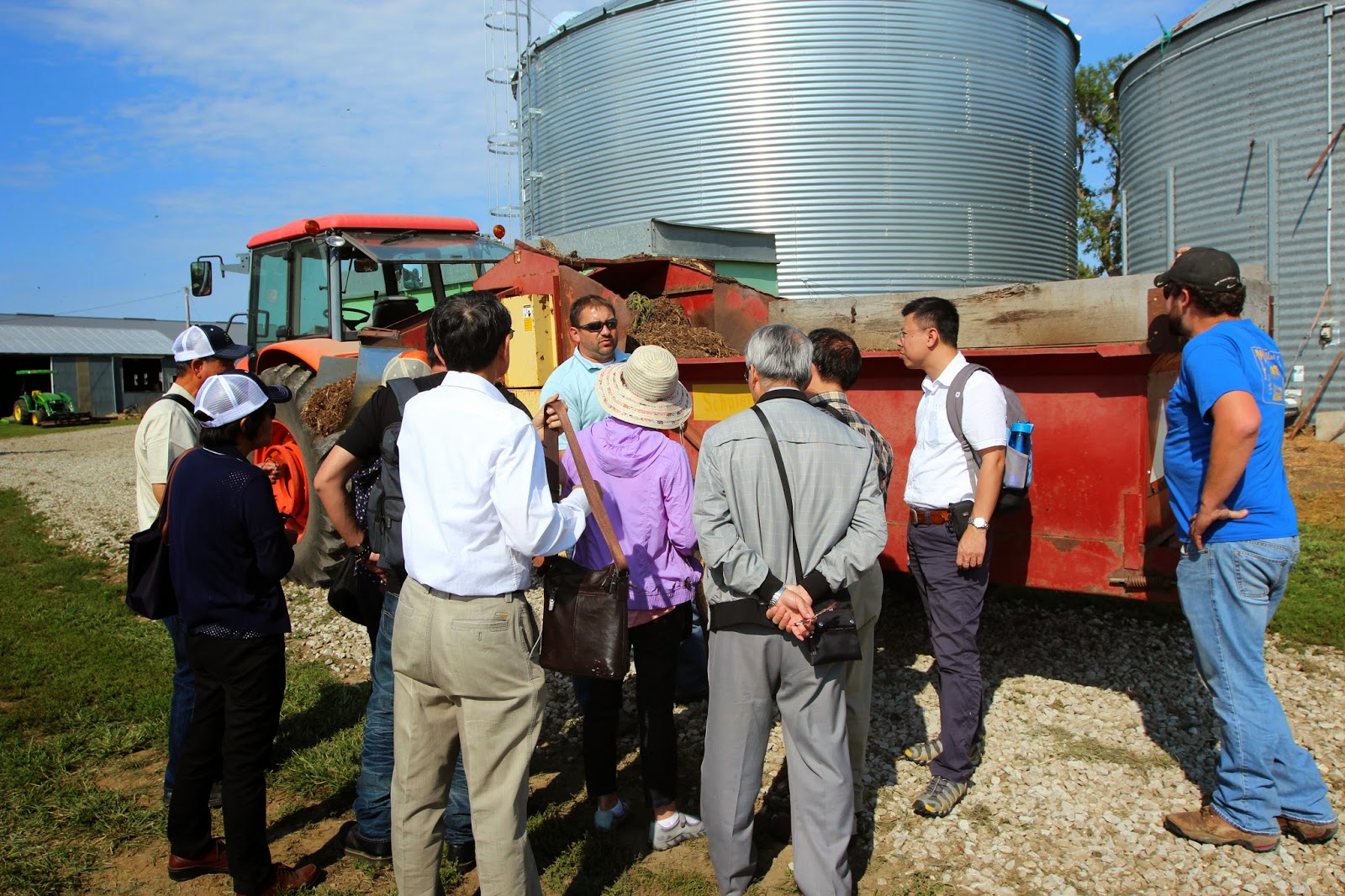 We showed them some of our cattle, the feed that we feed them, and our machine shed.  They also got to sample some deer jerky and loved it! 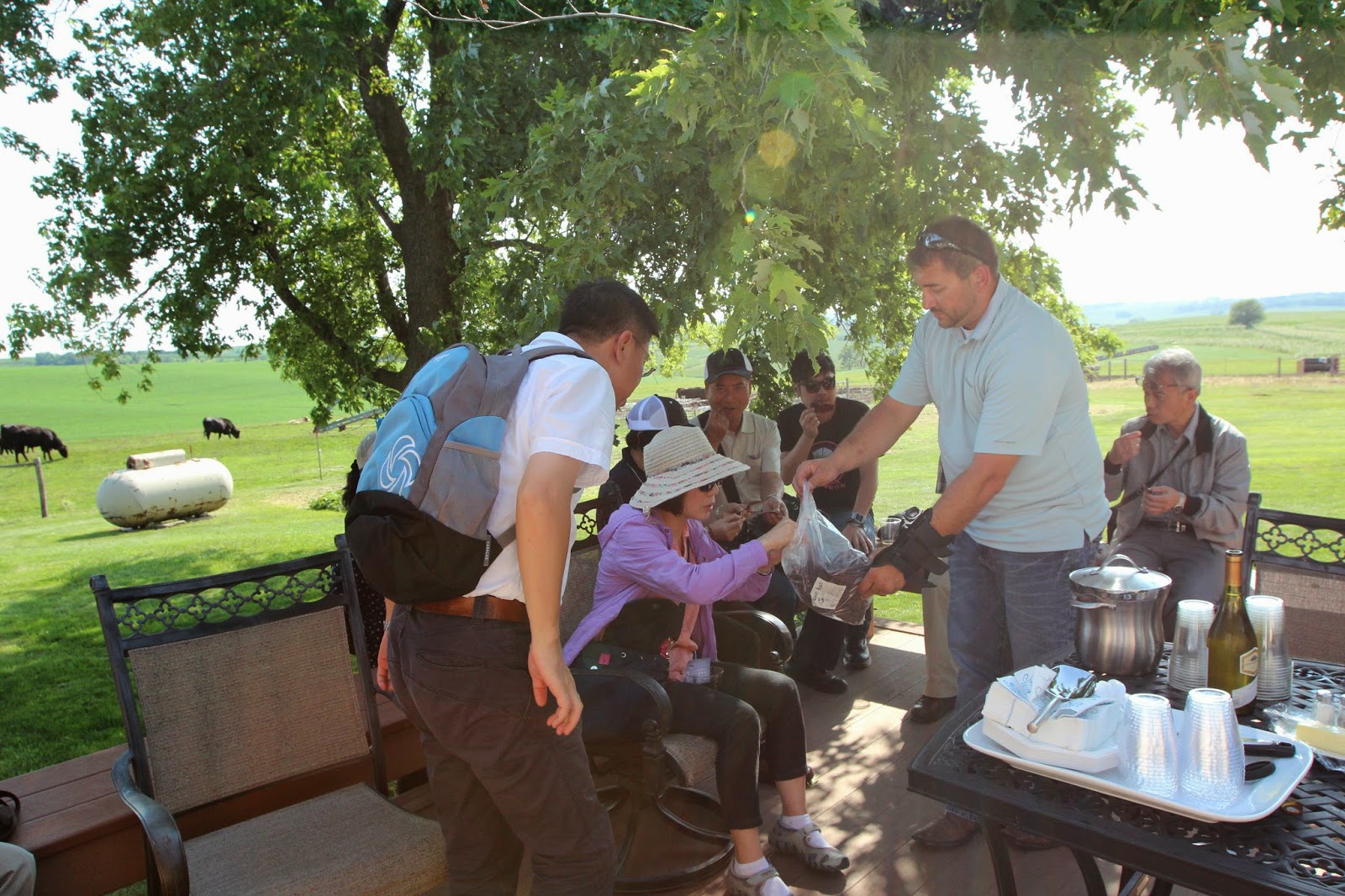 Since they were visiting in the afternoon, I wanted to make them something to eat for a snack, so with the help of my Facebook friends, I came up with Sweet Corn Ice Cream with a Blackberry Sauce. 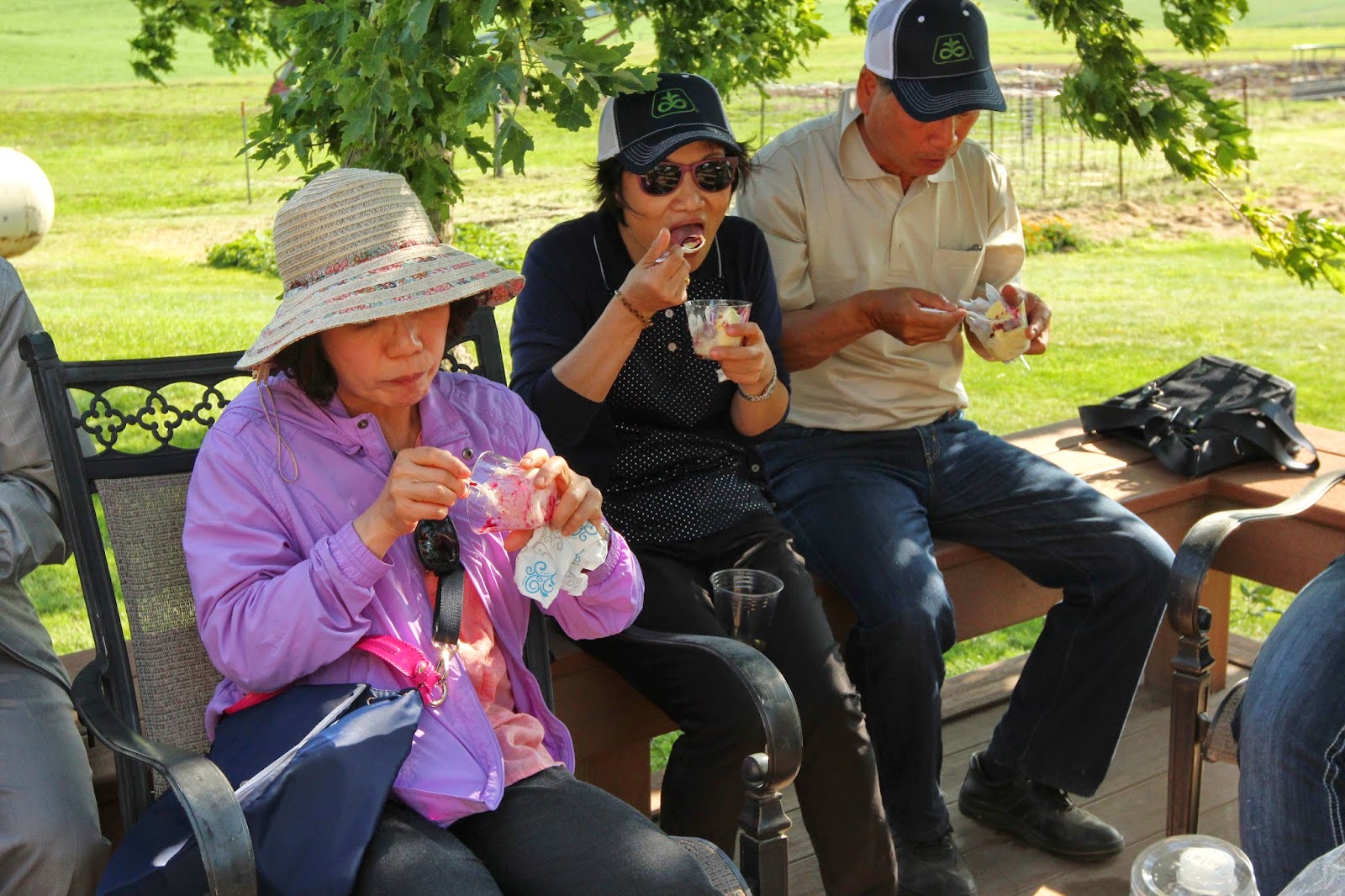 We also grilled some sweet corn for them to try too.  It was all a hit!  I was told that I needed to commercialize my sweet corn ice cream and that they would buy a ton of grain and a container of ice cream at the same time! 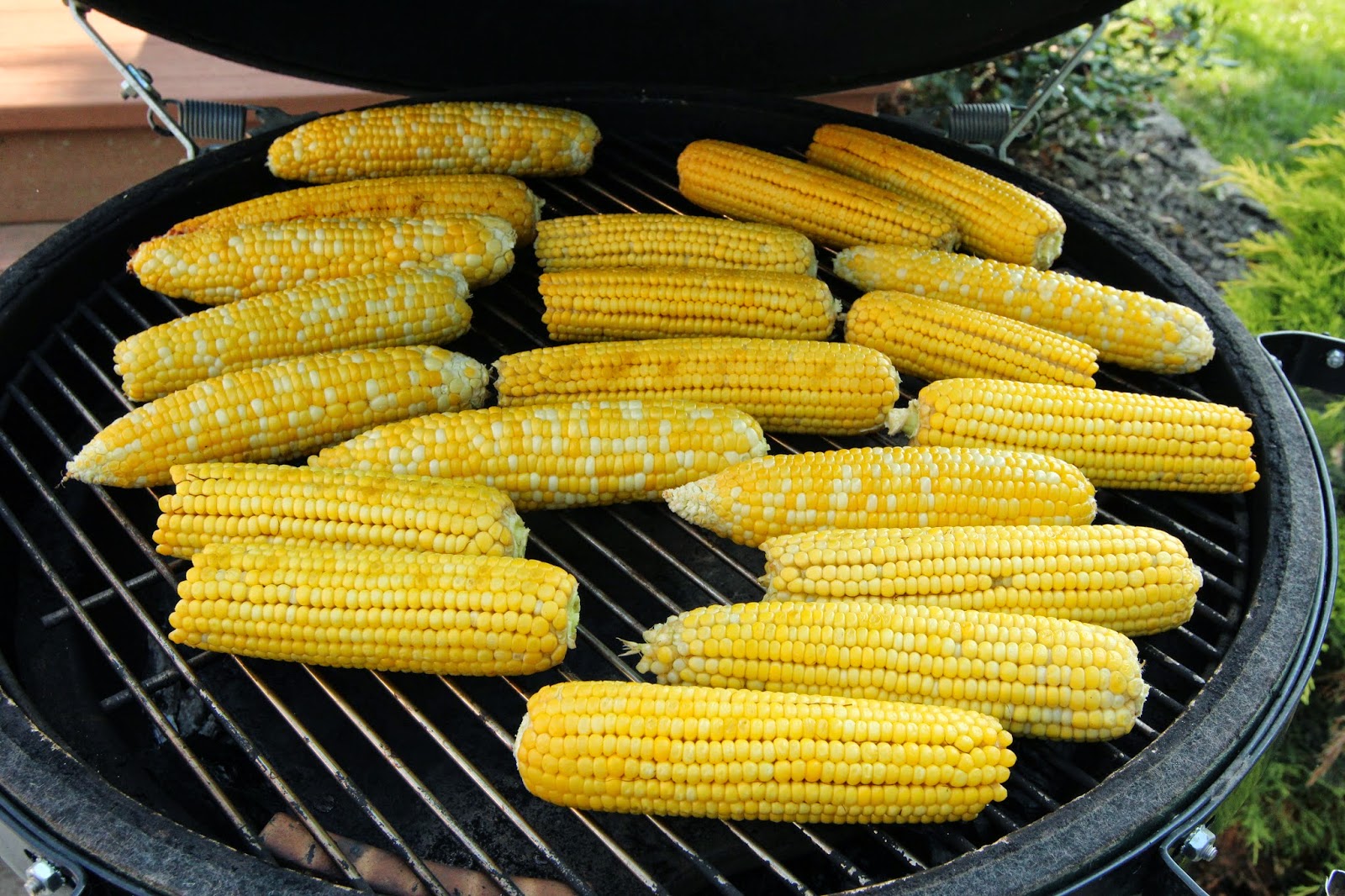 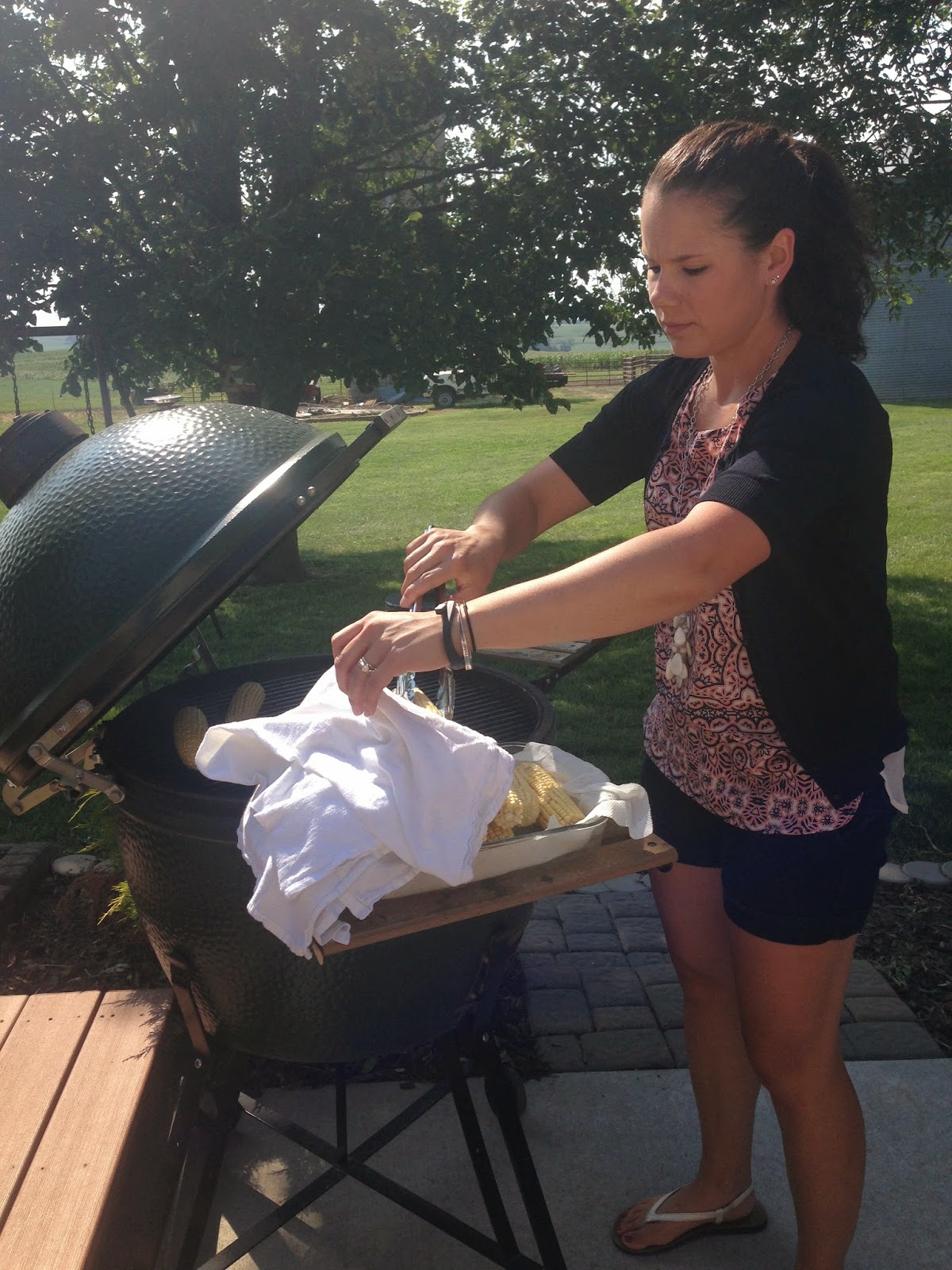 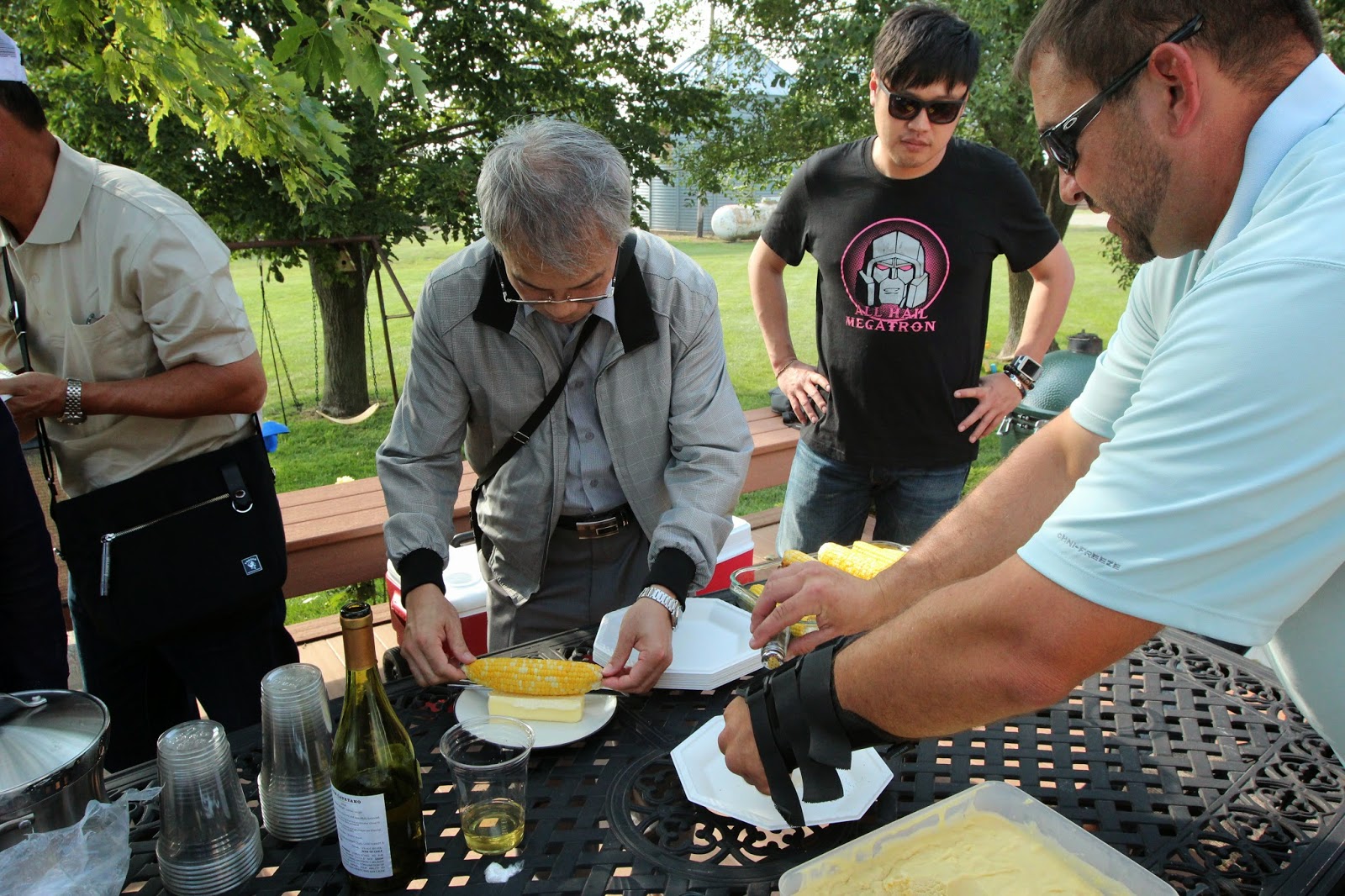 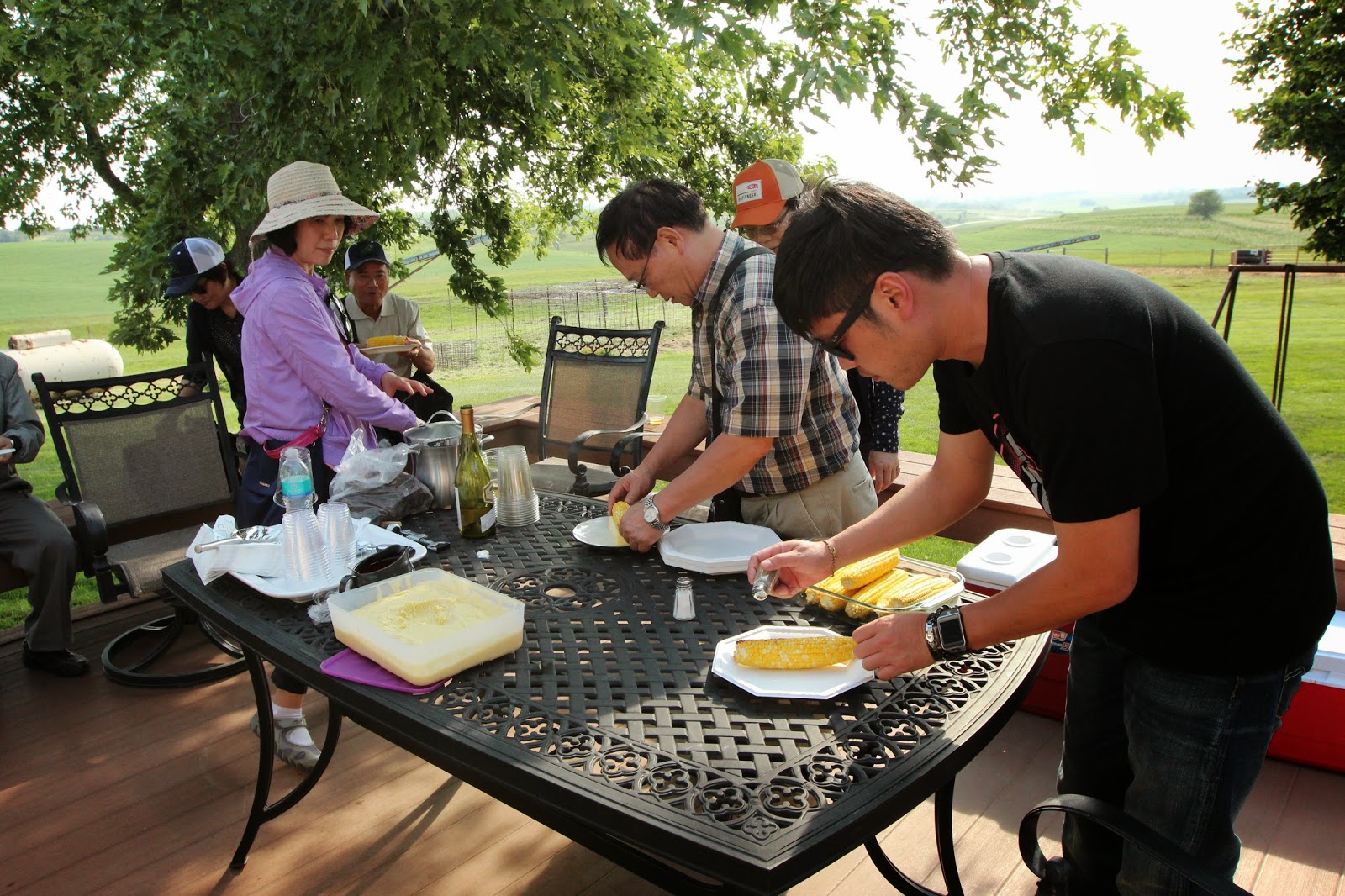 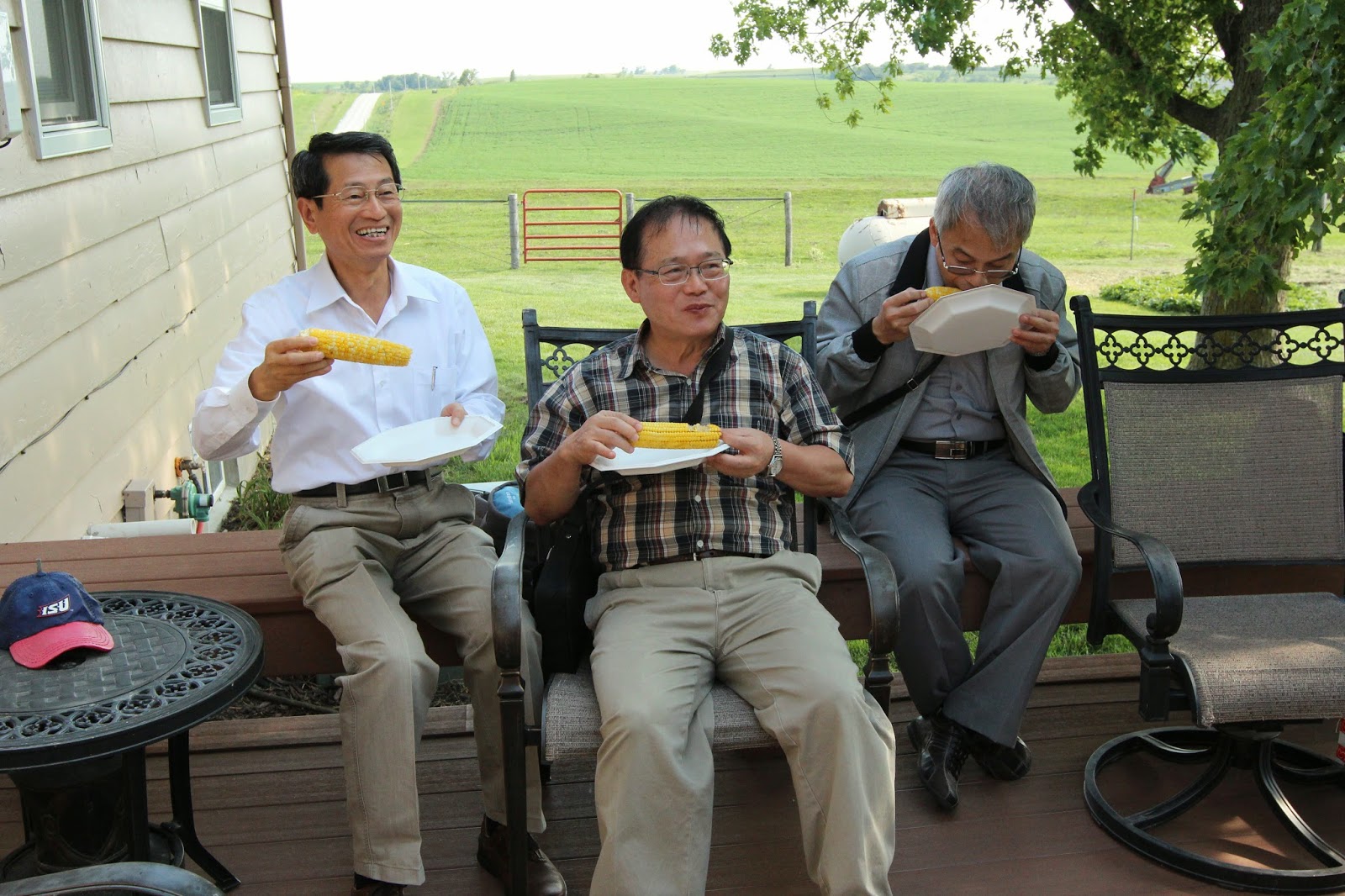 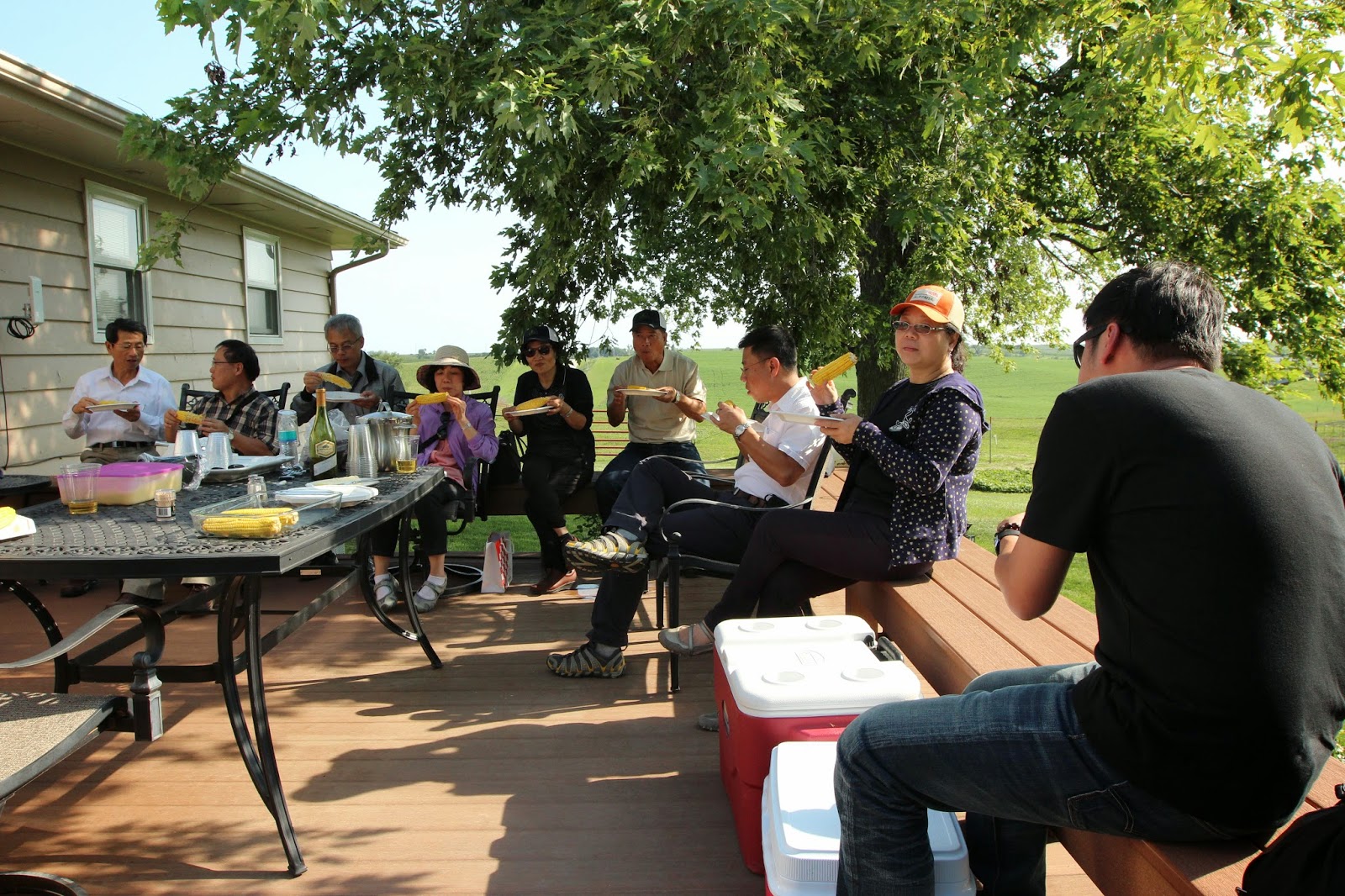 Right before the group left, we planted a tree that I recently received at my Ag-Urban Initiative Leadership graduation.  Each of my classmates were given a Swamp White Oak tree (native to Iowa) from our leaders.  It was a really neat gift and really symbolic of everything that we talked about in our classes over the past six months.  We thought that it would be a neat thing to do with the Taiwan group while they were here. 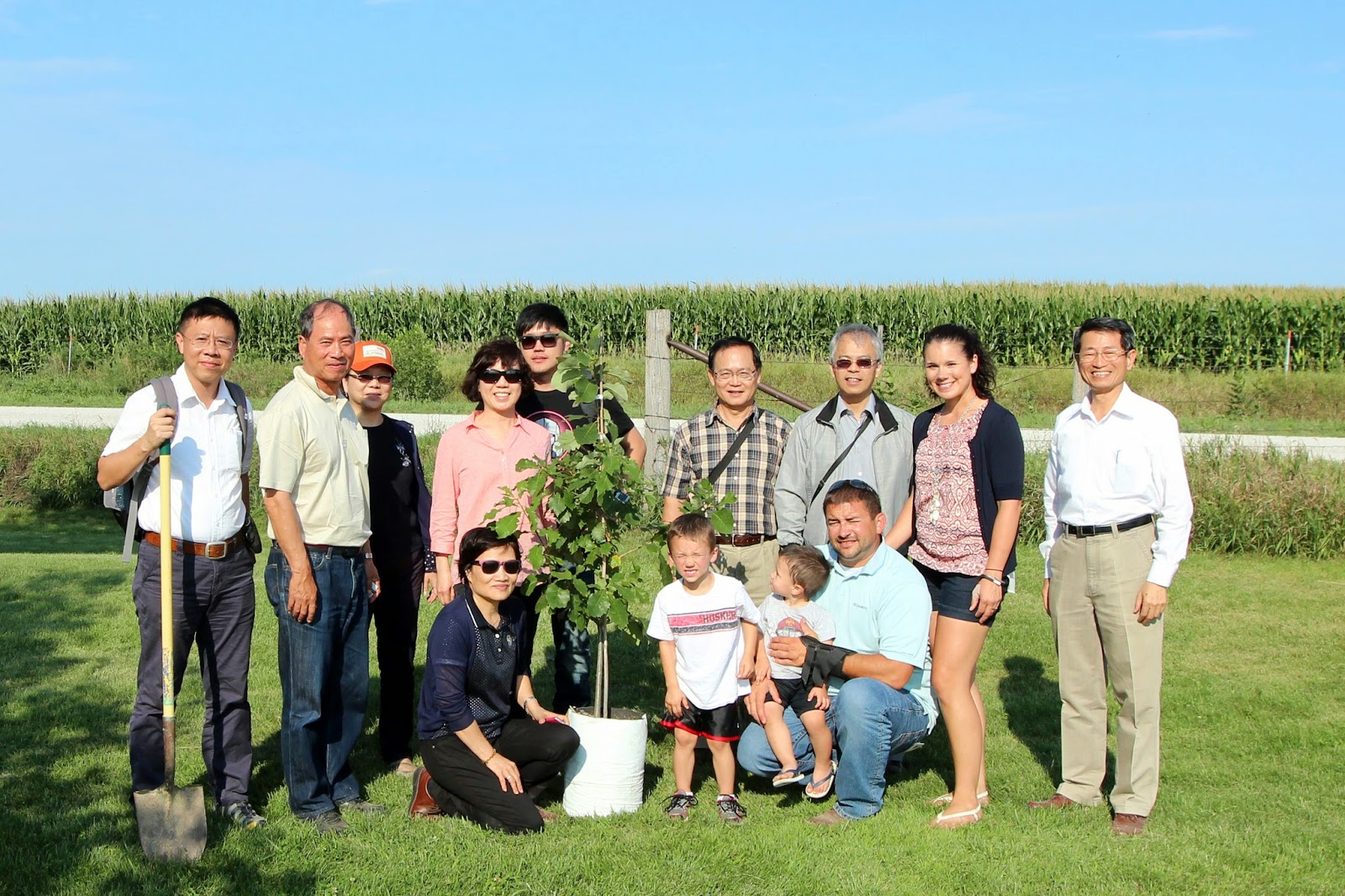 After that, we had to say our goodbyes.  I wish we had more time together, but they had to head back to Omaha, NE for the evening.

I look forward to staying in touch with this wonderful group and hopefully being able to make a trip to Taiwan in the near future to see their country and learn more from them!

« Wordless Wednesday: Checking Cows at Sunset
My Baby is Growing Up »