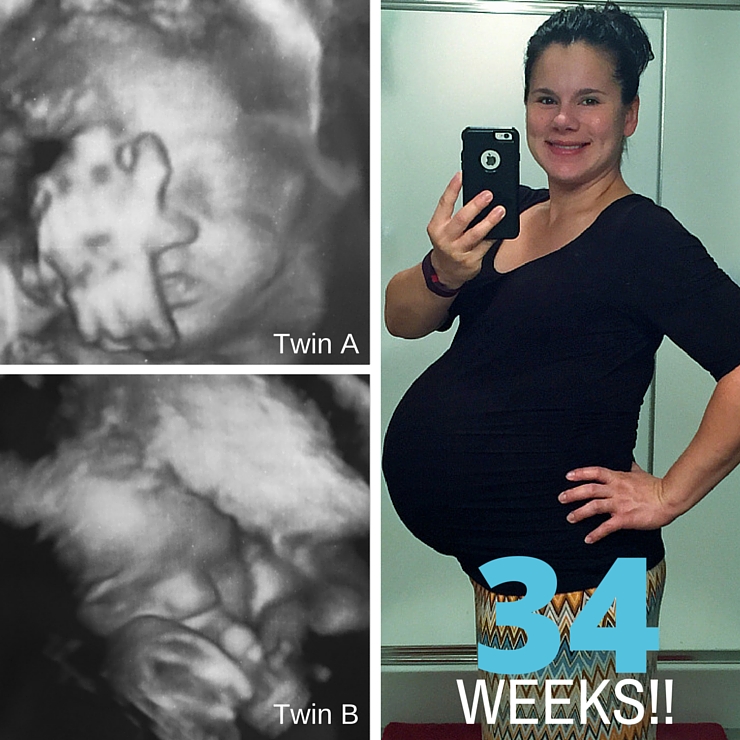 Well, I have officially made it to my doctor’s goal of 34 weeks pregnant with these boys!  He’s said from the beginning that “our” goal is 34-37 weeks.  Well, mine is closer to 37 weeks, but at least we’ve made it this far!

I wasn’t sure last Friday when I went in for my Non-Stress Test (NST) if I was going to make it much longer though.  I had been having some contractions that morning that were different from the normal ones that I feel.  Often times, especially at night or when I’m up and moving around a lot, I get contractions that I can feel across my stomach.  These only last a very short time and usually sitting or laying down and relaxing gets rid of them completely.  Well last Friday at 33 weeks I was having contractions that started on my back and wrapped around my side.  Not so much on my front.  I knew I was going in for my NST anyways, so I got the boys out the door and then headed to the hospital.  Usually the NSTs only last about 20-30 minutes if the babies are cooperating and we can get their heartbeats.  Sometimes they are extremely active and it’s hard to get a good read on their heart rates.

Well, during this NST the machine was picking up my contractions and three hours later they were able to get them to stop by giving me a shot that was basically a muscle relaxer and an IV.  I was sent home and told to take it easy and if the contractions started up again I first needed to try laying down on my left side for an hour and drink a lot of water.  If at the end of that hour I was still feeling the contracts I was suppose to call Labor & Delivery and/or head into the hospital.

Well I rested most of the afternoon and that evening I was up making supper and treats for Hudson’s soccer game the next day and I was starting to feel the contractions again.  So I laid down and drank lots of water as instructed.  That seemed to do the trick!  I pretty much laid on the couch all weekend and relaxed.  And I’ve felt pretty good all week!  Both of my NSTs this week have gone really well.  So I’m hoping I can make it a few more weeks!  My goal all along has been to make it to October and we are almost there!

I did have another ultrasound this week and the babies are growing just like they should be!  They are both around 4.5 pounds (which is about the size of 1 baby at this point).  They totally have their brothers’ noses (aka the “Baldonado nose” as Kevin refers to it) and you could see some hair on their heads already!  Hudson had a full head of hair when he was born and Axten had quite a bit too, so we’ll see how much these two have! 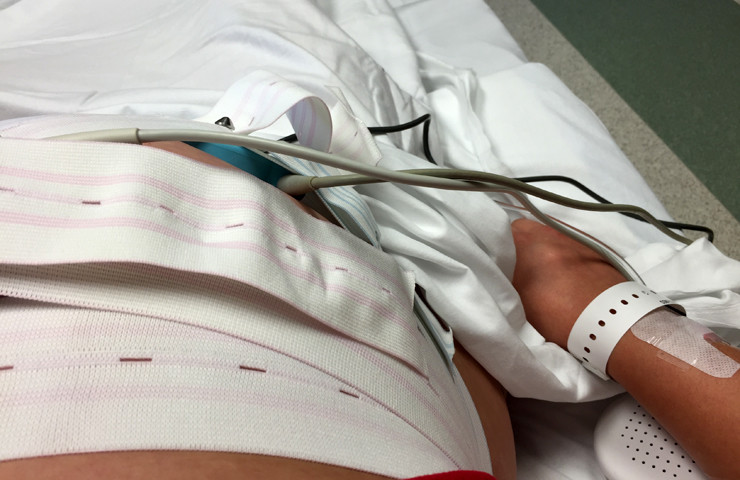 I’m feeling pretty ready.  I usually say that I’m physically ready to have the twins, but not mentally.  🙂  I’m starting to get pretty uncomfortable; my ribs hurt, my lower back hurts, and I get kicked in my bladder quite often which does not feel great.  But mentally??  I’m kind of nervous about this two thing!  I grew up with twin sisters, but this is going to be completely different.  Taking care of two tiny babies that depend on you for everything along with taking care of and spending quality time with Hudson and Axten, I just don’t know how this will happen!  Thank goodness we have lots of family that’s willing to help and I’m sure I’ll be accepting a lot of it!

I know we aren’t given anything we can’t handle, but it sure seems like we are being tested!  🙂

I’m hoping for two more weeks to get some things wrapped up at work and to spend a little more quality time with the boys before the babies arrive.  So I’m going to sign off now so we can have movie night tonight!    Hope you all have a great weekend!

Check out my other posts about the twins:  31 Week Update, Gender Reveal, Q&A About Our Identical Twins, How We Found Out We Were Having Twins, Hudson & Axten’s Big Announcement.