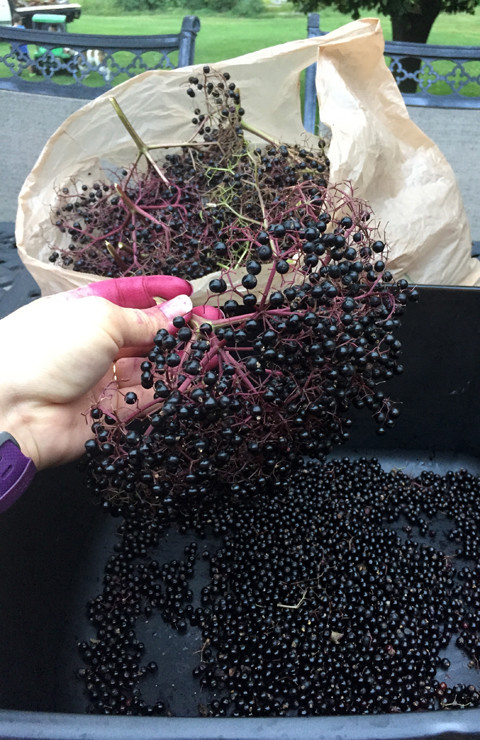 Last Friday evening Kevin showed up on the back deck with an arm full of elderberries.  He asked for some bags to put them in and said he was going back to pick more.  Just what I needed!

I had never made anything with elderberries before and I already had peaches to can and/or freeze, but I grabbed my Ball Complete Book of Home Preserving and looked to see what I could make with elderberries.  Well, the first recipe I came across was Elderberry Peach Preserves!  I had tons of peaches in my fridge, so that recipe was definitely doable.

The only issue was that there were lots of bugs that came along with the elderberries so I had to destem them outside.  It was already getting kind of dark, so I had to work fast.  And it was pretty cool out, but the boys ran around and played while I got about 6-7 cups of elderberries somewhat destemmed. 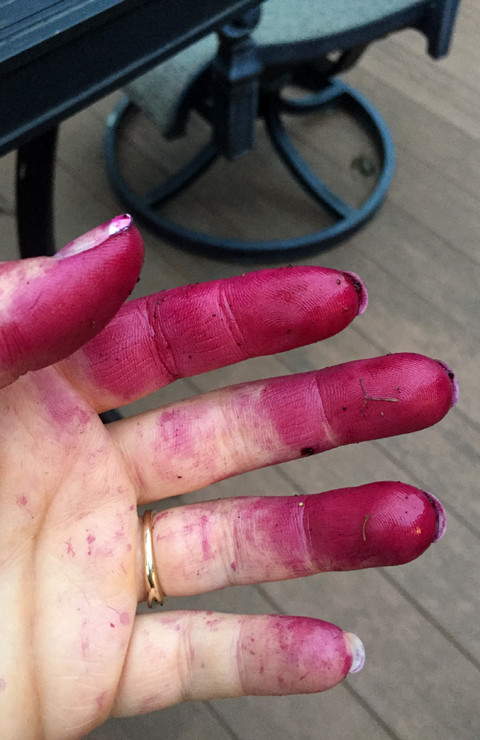 You can see that it stains your hands a beautiful purple color, but it actually came off really easily with soap and water!

As you can see in the picture below I missed some smaller stems, but got the majority of the larger ones out and tried to get all the bugs too!  I guess that’s just added protein right?  🙂 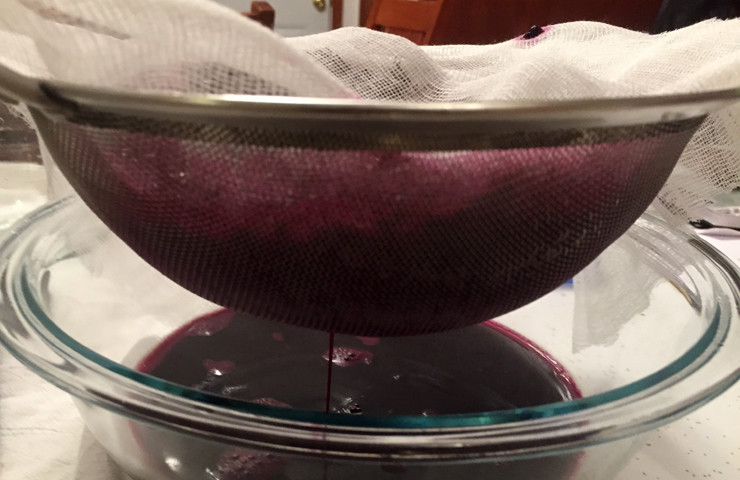 I let it drain by itself while I got the boys ready for bed, but I could tell that I was close to 3 cups of juice (which would make two batches) so I helped squish the remaining juice out.  I ended up right at 3 cups so that worked out perfectly!  And I only used about half of the elderberries that Kevin had brought me.  I gave the rest to his mom!  I think she was going to make elderberry syrup with them. 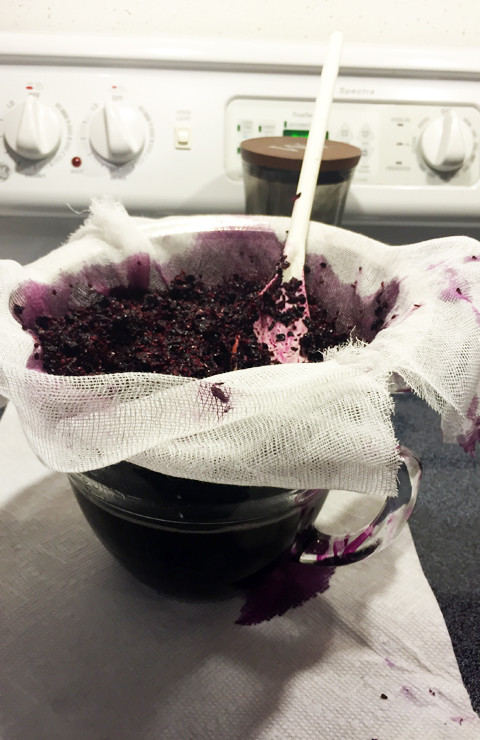 I put the juice in the refrigerator for the night and the next afternoon I made the preserves. All you have to do is add the sugar, elderberry juice, lemon juice, and chopped peaches into a large stainless steel pot and cook until you have a rolling boil. 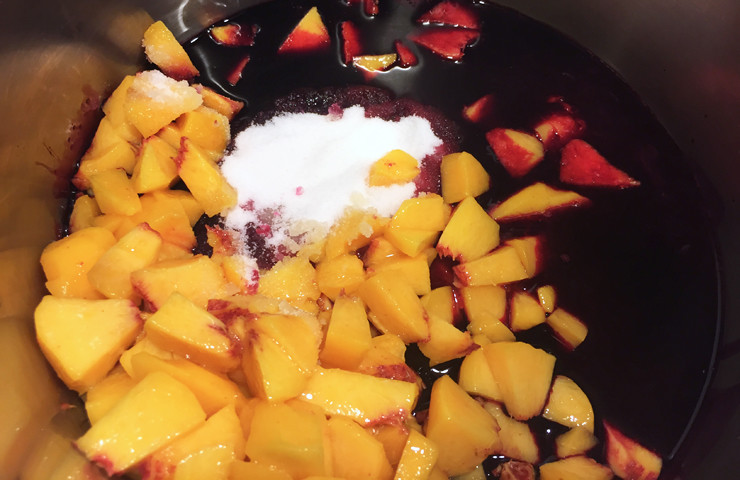 Then you add in the two pouches of liquid pectin and cook for an additional minute. 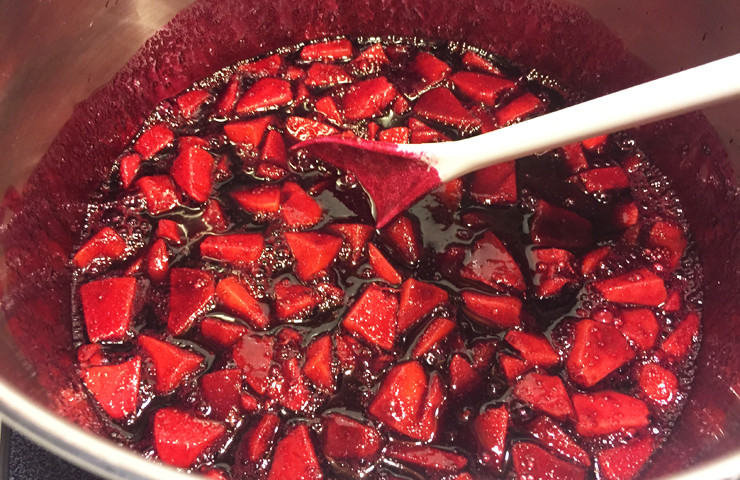 After removing the pot from the heat and skimming off the foam I took a potato masher and mashed up some of the peaches.  I probably should have diced them a little smaller (which I did for the second batch), but a potato masher worked well too! 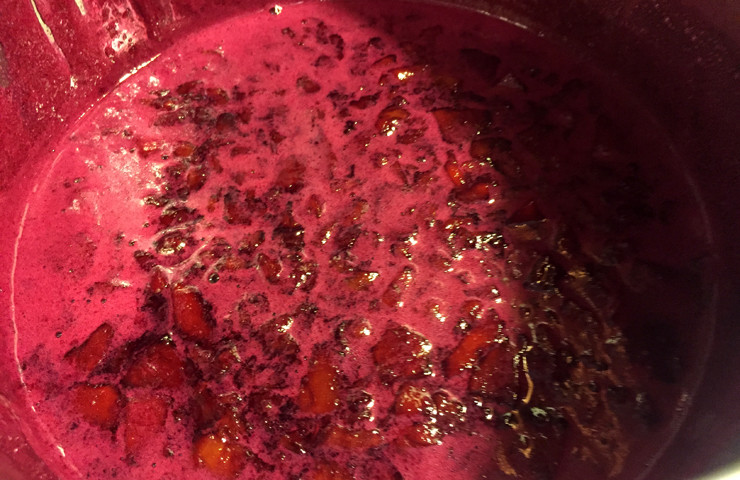 I then followed my water bath canner instructions and processed the preserves for 10 minutes in a water bath. The recipe says that it makes about eight 8-ounce jars, but I ended up with 19 8-ounce jars with the two batches.  So plan on a little extra!  Also, the recipe says that if you don’t have quite 1 1/2 cups of elderberry juice you can add up to 1/4 cup of water or apple juice to compensate. 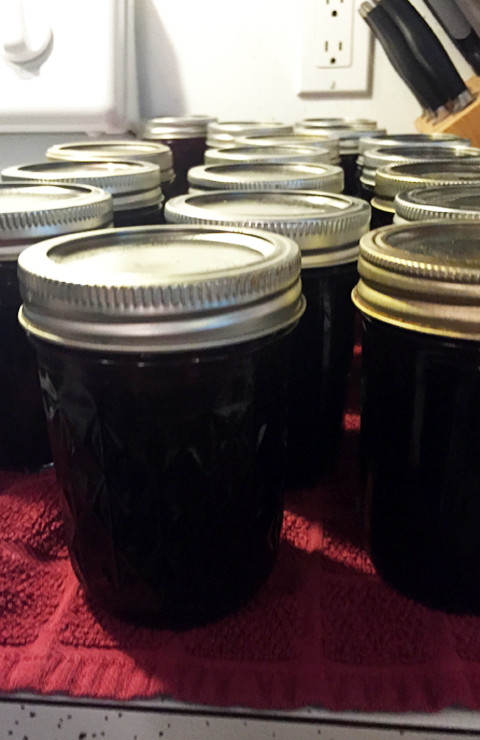 After the jars were sealed and cooled, I removed the rings, wiped them off, and labeled them. We dug into the first jar right away the next morning for breakfast!  I had it on my waffles and the boys have had it on toast this week!  It’s delicious!  And really easy to make!

Below is the exact recipe from the Complete Book of Home Preserving.  Hope you enjoy!